I’d still intended to pop along to the Manc Beer Fest after a couple of halves, but a couple of things derailed my plans.

First, a hideously calorific plateful of gunk selected by Matt at Archie’s in the Arndale. Now the lad has left the Royal Family he needs to earn a living making cheesy chips, I guess.

And then a smoke signal from the east letting me know that the Tweed Tap in Hyde was open.

Now every year we tickers have a few new entries we called TLOs (tricky little sods) which either open daft times, close due to neighbours complaints, or have just unfathomable hours.

Two previous attempts by other tickers to breach those Hyde defences as smoothly as an 1887 Preston inside forward had failed. 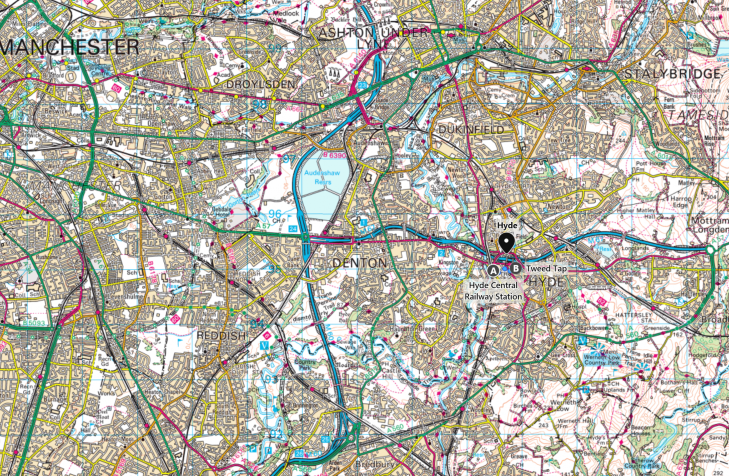 Sadly, the pictures on the Tweed Tap Facebook page are not entirely representative.

Hyde is a solid Cheshire town, the Leigh of the south (sorry), with some proper red brick and cheap biscuits in the market.

No time to stand and admire, only 22 minutes to neck a half and walk the seven minutes back to the station when I finally found the Tap, which is now Tapless having sold the microbrewery.

Now I don’t know about you, but table football (on another tables) spells Proper Pub to me.

“You know it’s stout, don’t you ?” said the jovial landlord as I inexplicably opted for a pint of the Prospect,

I didn’t, but I’ll drink anything.

It was marvellous, a silky rich NBSS 4.5, the beer of the year. And I NEVER lie about NBSS.

There was a touch of Wigan’s cheery Blundell’s Café Bar about it; oddly that one has a mural of Venice even though it’s in Wigan. What can it mean ?

Astonishing beer apart, it’s just a community bar, playing “All In All” by Joyce Sims and with couple of City fans chatting real ale and ridiculous football pricing.

I loved it so much, I suddenly realised I had six minutes before the train to Marple. Could I make it ?

8 thoughts on “NO HYDE-ING PLACE”