Every 11th Thursday is curry night, when two middle-aged codgers from the east of England meet up in obscure parts of the Midlands to enjoy pubs and Indian restaurants.

It’s a simple formula, only faltering slightly when I book rooms at a complete dump on the A5. Sorry Charles.  The pub at the motel was owned by Greene King; I’m sure Tom or Dave will be able to identify it from that information.

That was the only downer on an astonishingly good evening, and quite unexpected from a town I’d have described as “plain” on the basis of previous daytime visits.  The night brings magic to Nuneaton.

Even the fairly limited architecture looked better than usual, though as usual you have to look up rather than at the pound shop frontages.

For some reason, we started at the Spoons, possibly because we couldn’t find the Lord Hop. Previously solid but unspectacular, tonight it produced the best Schiehallion Lager yet (NBSS 4), and something dark and local that was perhaps even better.  Loads of drinkers of all ages, a great advert for cask in Wetherspoons.

The Lord Hop was the sole new Beer Guide entry, Nuneaton’s first in a while, and a great advert for cask, full stop. 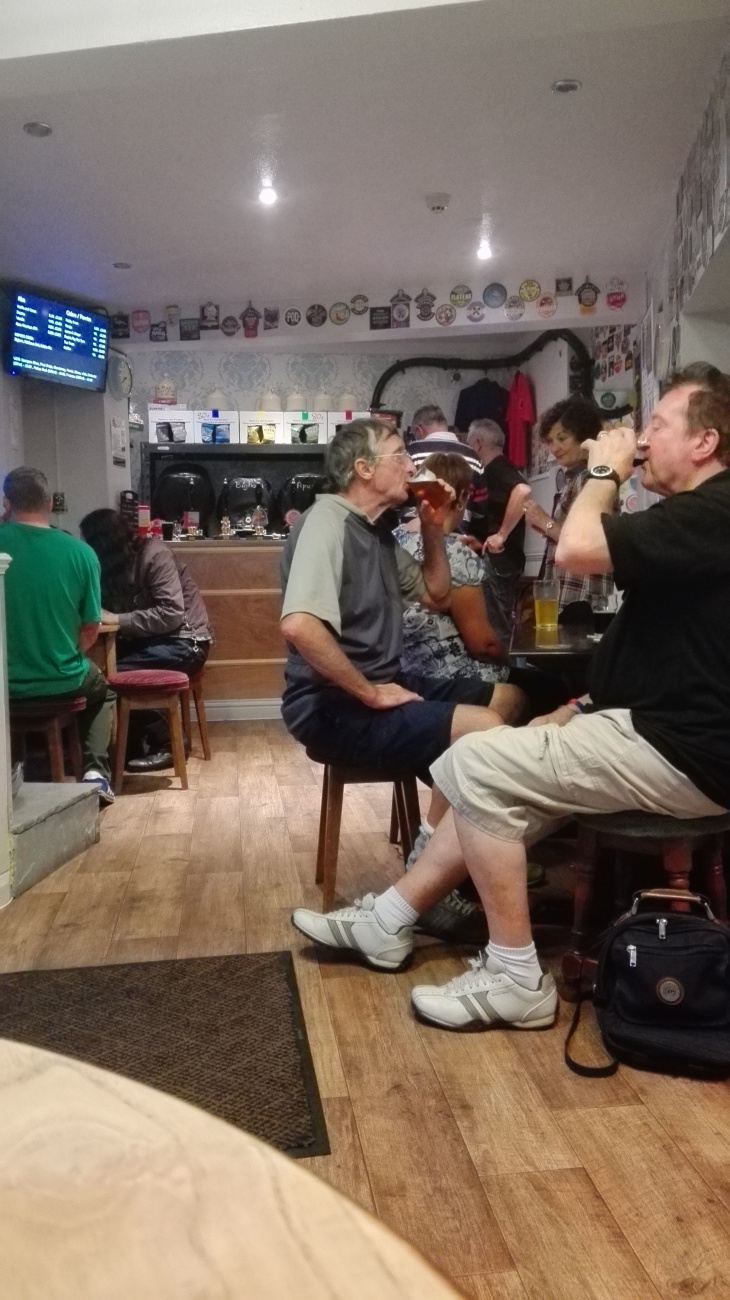 I’m starting to warm to micropubs, mainly because the beer in micros in towns like Cheadle Hulme, Gillingham and Mansfield has been so good. But also because places like Lord Hop seem to be attracting a wider range of customers than you’d expect.  The upstairs room was packed with youngsters (i.e. younger than Charles).

This is the beer of the night, Left Handed Giant’s Vanilla Stout.  As good as it looked, so we both had another pint, breaking every rule of the curry night.

Proper pub chat here, about karate and coffee chain bosses and politics, rather than about how folk weren’t “getting the cacao in the stout” (Untappd).

The young folk recommended the curry house, which turned out to be the wonderful Crossed Khukris Ghurka restaurant. Some locals turned up to photograph us drinking bottled Pedigree (ugh) and made a right noise outside.  I’ll spare them the photographic evidence of their night.

The fun had to end sometime,

but luckily we made the Crown with 20 minutes to spare.  Again the highlight was superb beer quality (Norman’s Conquest NBSS 3.5) and some rambling chat about Moo Bar with a bloke from Carlisle.

The Crown has been a decade in the Guide, but felt a different pub tonight, with a lived-in character, weird customers and sensible beers.

It’s a while since I’ve seen such busy pubs on a week night, and that contributed to the best run of quality beer since Mansfield last year. Cheap prices and cheerful locals all the way too.

The 2 mile walk back to the A5 was a necessary one, the coffee didn’t work.

15 thoughts on “NECTAR IN NUNEATON”