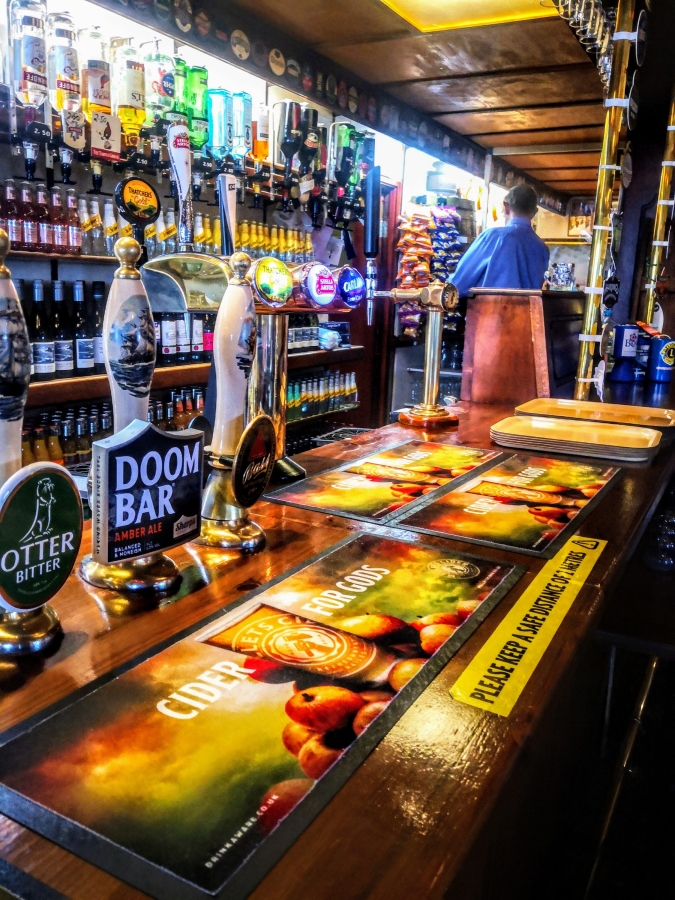 Well, it was Quinno wot won it.

So he should, he was born in the public bar. Or conceived on the beach, or something.

He certainly sold me on the charms of Portishead, only previously visited for the Windmill (unlucky, Paul) and the modern Spoons.

But no-one told me about the gorgeous the retirement community below the Ship down to the National Trust’s Redcliff Bay, exhilarating on a stunning sunny September day*.

You could be in Mallorca, wherever that is, with the immaculate gardens and plant pots that I hoped I wouldn’t need later.

Another series of one way arrows leads me to the bar and the Landlord (Mr Vic Long) of 47 years, which is the one thing I know for definite about the Ship.s

I suddenly realise this is the pub of my (and possible Stafford Paul’s) dreams.

Mr Long (he’s wearing shirt and tie so I’d better be formal) tells me his entire history as a publican, which stretches back to the ’60s, taking in Worthing E and numerous stints as a relief barman. Take that, octogenarian Devonian ladies !

He also gives me more information on Gwent steelworks than you could ever wish for.

Totally fascinating, particularly on the subject of Doom Bar, which he’s put on the bar to the delight of regulars since re-opening. “Nothing is carved in stone“ he said, when I asked if that was his regular range, so expect Bass to be replaced by Lost & Grounded’s Cucumber Sour DIPA in 2031.

I thought about having the Doom Bar or Otter to annoy you. For about 0.2 seconds.

How can a pub serving Bass this good (NBSS 3.5/4) not be a Beer Guide regular. Served flat, cool and rich, this was a Top 10 Bass.

Mark Shirley would be impressed, too.

As would the Beer & Pub’s Forum’s bench seating fans.

One other regular had sneaked in. I wondered how many locals and tourists would tip up later for the sub-£10 pub grub.

A classic, as Baa Baa Toure confirmed on my return.

*Don’t panic, I’m not really up-to-date. There’s a dozen in Devon to bring you yet, and a trio in Sheffield.