The drive back from Southern Poland to Calais is 14 hours of motorway punctuated by nine McDonalds across five countries. Even on mainly German roads that’s not healthy in a day, so we stopped at another place we’d hardly ever heard of before, halfway between the honeypots of Leipzig and, er, Dortmund.

Kassel is, I read, one of Germany’s poorer towns, and certainly didn’t get the post-war restoration that, say, Nuremburg has.  There’s a touch of Bradford about it, a few remaining stately civic buildings and some great art standing out in a town centre given over to a compact retail site.

Fortunately Mrs RM was too tired to go shopping when we arrived at tea-time, or it might have been an expensive evening.  In fact too tired to even cross the Fulda from our B&B Hotel to explore the European Beer Guide (EBG) entries, so we ended up at an average looking pizzeria in the backstreets. Proper German food.

As nearly everywhere in Germany, Al Fiume had a decent range of beer.  Alongside Kongspils, they had these two.

The Italian waiter (to be fair, he could have been from Grimsby with a good accent, I wouldn’t know) seemed a bit alarmed when I asked for the Hutt, which I take to be the local beer. I guess it’s like asking for Old Mill rather than John Smiths Smooth in Snaith. Anyway, he gave me a short lecture about the merits of Naturtrub, which you don’t get in Pizza Hut.

Both beers were OK, but as usual a bit gassy for my tastes.  The linguini and pizzas were cheap and filling, in an interestingly decorated room with six different coloured Martini bottles, which Mrs RM did well to resist.

In the interests of research, I let Mrs RM retire with a 3 euro bottle of wine from the B&B vending machine while I sprinted for the EBG entries.

There were a succession of ordinary looking bars along Entenager leading into the Christmas markets and C&A sale, looking much your basic kneipe than the licensed restaurants that often dominate.

Groups of lads on the lash were sizing up their options, though presumably on factors other than price, as they all had half-litres on tap for 3 euros and Sky.  I’d normally go for the one with the glowing Father Christmas, wouldn’t you ?

Instead, I just had to do Bierakademie, which was a reminder of why I love basic German pubs so much.  No food, no children, just adults talking rubbish over “Me and Bobby McGee“. Followed, unfortunately, by the “Titanic” theme. Very German.

A couple at the bar were alternating puffs on their fags, and sharing their brandy, which I found rather touching.  It’s good to see daft laws being so openly flouted in the middle of town.

If the locals were surprised to have a Brit in their  bar mispronouncing Alt they didn’t show it, the chap with a scarf raising his own glass of Schlusser Alt to me in recognition of my unique discernment. Shame it was rubbish, unlike the local Casseler which had some real depth to it, and happily devoid of excess fizz.  A snip at £2.50 a half litre.

It was basic, but immaculate, with gleaming beer glasses beautifully arranged, even if they were Krombacher and Jever. Only a sense of duty to the EBG made me set off to look for two central places on the edge of the shops, stopping briefly to spend that outrageous 50c fine the Germans make you pay for using their toilets, (which aren’t even covered in graffiti).

Well, the first one (Zille Berliner) appeared to be a shisha bar, and Casa Columbia had definitely crossed that line into pure restaurant territory. So I wandered along the river past the dinosaur.

The Rough Guide to Germany warns about Kassel’s terrifying ring roads. I foolishly joined students on a chicken run across Frankfurter St, and nearly became Ex Martin, which is probably a better blogging name. I’d never seen actual Germans jaywalking before, and was lulled into a false sense of security.

My last bar was a real oddity, resembling  a sports club tucked away on a little island of Finkenherd with which it shares its name, and accessed by a footbridge over the Fulda.  With students from the nearby University away, there were just a few middle-aged friends enjoying drinks in characterful restaurant surroundings with a tree in the middle. The music selection was Nik Kershaw and INXS; 1986 and all that.

More cheap local Casseler and a friendly word in German as I left, or perhaps something about 1966, who knows? 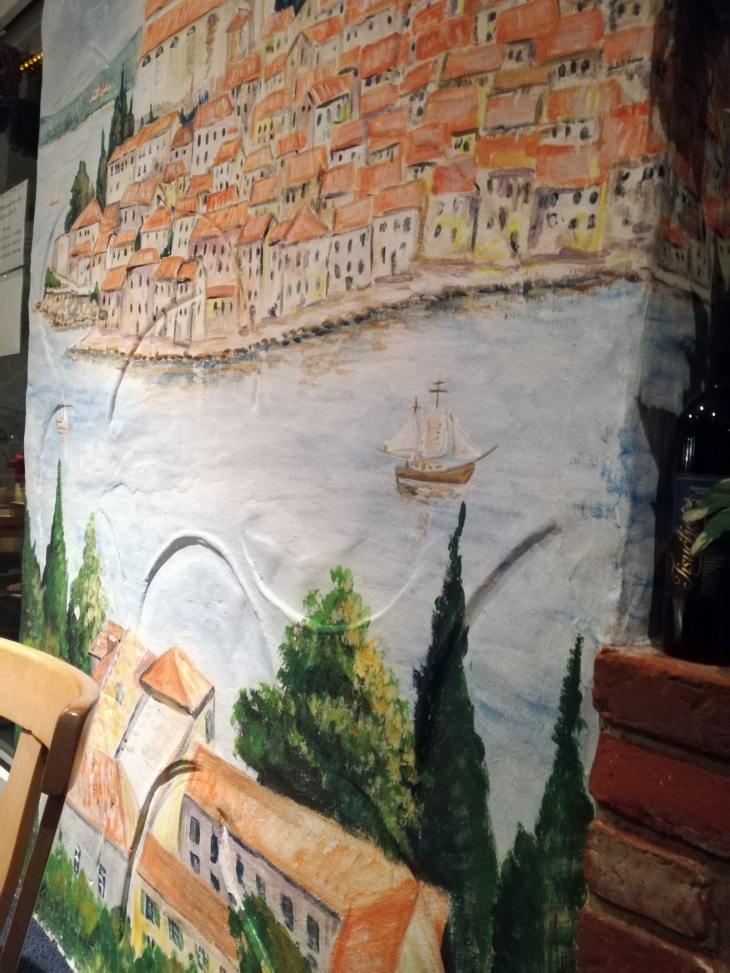