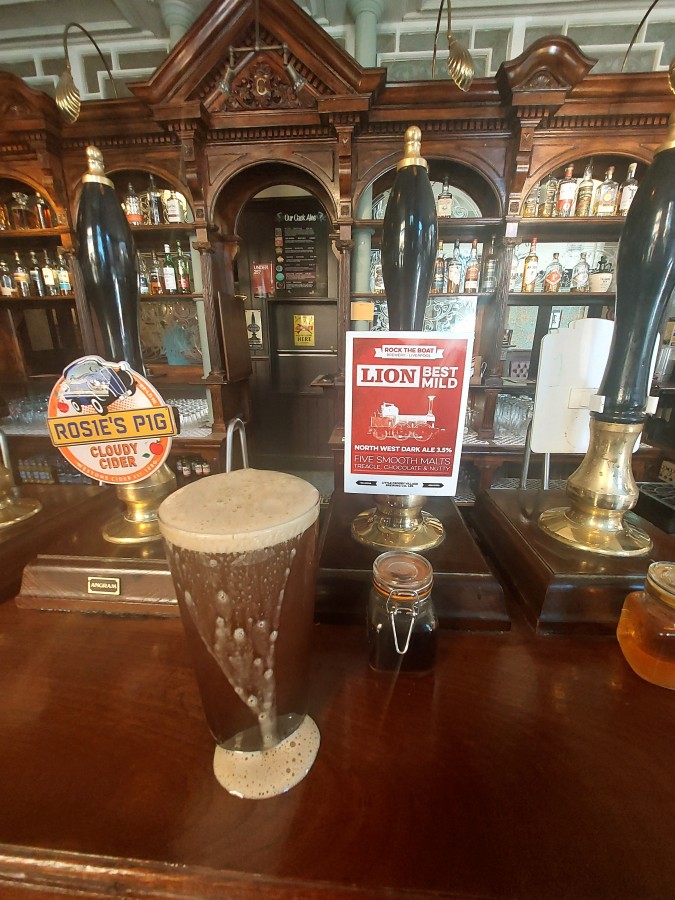 I came back from the Isle of Man on the Mannanan, a boat obviously named after Liverpool wing legend Steve McManaman, somehow resisting the keg option on board.

The ride down the Mersey towards Pier Head give you tremendous views of the Merseyside Marvels; New Brighton beach, the Magazine, Birkenhead docks…

Sadly I’m returning home via Liverpool, and I reckon I’ve time for one (1) Scouse Pint on the way to Lime Street.

There’s load of new stuff around Dale Street, but if you can walk past the Lion you’re a better #PubMan than I.

This is the bellwether ‘Pool house to judge the state of pubs. Last time here with Stafford Paul it was a bit too quiet, as had The Tand earlier.

But on this Wednesday evening just after 6 it was doing good trade, but was enough to see the pumps ticking over.

Apparently so. The house Mild from Rock the Boat (from the place with the iron men) was cool, rich and possessing a scummy head, a tremendous NBSS 3.5+ pint.

OK, it’s high tables, but there’s nothing much better than a post-work pint in a big city with Thin Lizzy and the Dubliners for company.

And the sun streaming through the windows.

A chap walks to my table. Is he about to tell me off for taking photos like they do with Blackpool Jane ?

No. “Can you watch my bike outside while I nip to the loo ?“.

“Sir, I can’t believe you’d be suspicious of your fellow Scousers as to think they’d nick your bicycle“.

I’m not used to such levels of responsibility since retiring, I can tell you, but somehow I managed it.

Great to see the pub in such good form,

and in fairness Liverpool looked a picture. I must persuade Stafford Paul back there soon.

NB At the bar, the barman told me he only gives 99p to the Manx pound. Can that be true ?

13 thoughts on “MINDING THE BIKE IN THE LION”