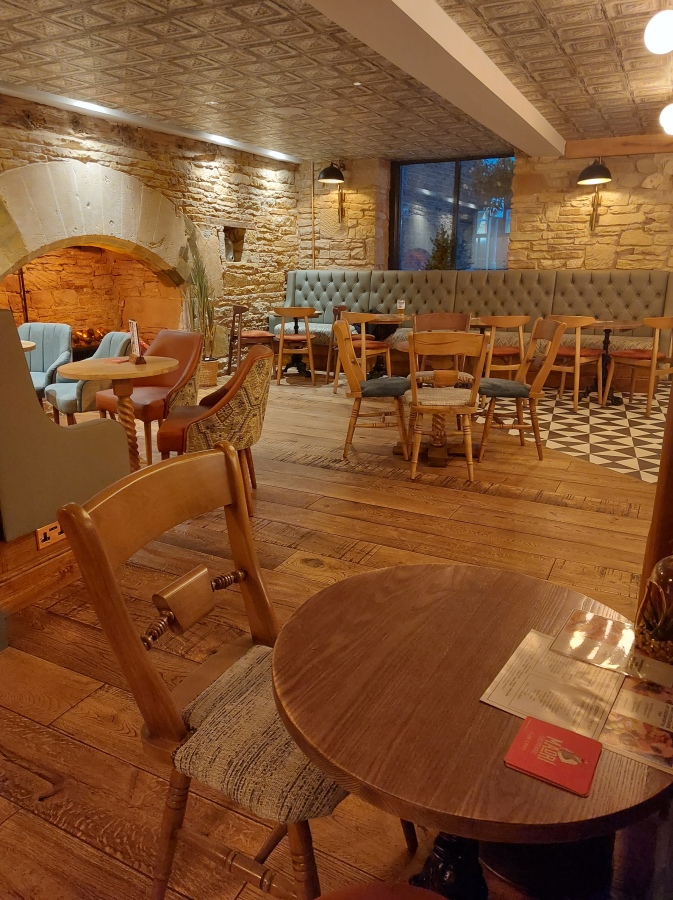 My final GBG tick for South Yorkshire (there was only two !), came in Dodworth, which you probably know better than I do.

37 minutes on the train from Sheffield, population 5,900 (Waterbeach size), a former mining village that’s now in the posh end of Barnsley. Yes, that one.

It’s most famous feature is the “pointless stile”, which people come from as far away as Wombwell to ignore.

It’s a captivating place, best visited in Autumn and when the pubs are open.

The Travellers Inn, keen to tell us it’s been around since 1782, remained resolutely closed, as was every other pub in the village on Monday afternoon. Impressive collection of windows here;

Plenty of new houses, including an estate built on the site of the Pop Factory, presumably not the Stock, Aitken & Waterman recording studios that gave us Sonia and, er, lesser talents.

But there were folk inside, so I asked when they were open, which apparently needed someone to translate into English and was met by four raised fingers.

So I had half an hour to document EVERY last beam in the village, every pumpkin, every quaint shop.

In fact, I could probably have nipped to the Toby Carvery at the hotel where we stayed when James was about to start college in 2017, but a man can have too much Doom Bar, and I save myself for the inevitable micro set-up at the Tap., sister to the Darton pub I so enjoyed in 2019

Except it was no micro. It’s one of the smartest small pubs I’ve ever been in.

The nice lady told me not to stand on the new flooring that was laid down, enthused about the owners’ plans for world domination (where “world” = Barnsley villages), and served me a pint of Stones that seemed a bit of a risk. And then I took it what seemed like a mile away to sit by the fake fire and enjoy the very cheesey soundtrack (ABBA, Robert Miles, Duran Duran).

The lacings don’t lie, this was a gorgeous 3.5, cool and foamy.

My train back wasn’t for half an hour, I’d walked the entire village, and so I had a second pint (Jaipur, NBSS 3 buit an ambitiously priced £4.40) and waited for the pub to fill up.

It never did. But I enjoyed the sound of the two staff chatting nonsense, and the Duran deep cuts, and only left with five minutes to spare when this came on.

7 thoughts on “A DODWORTH DAWDLE”