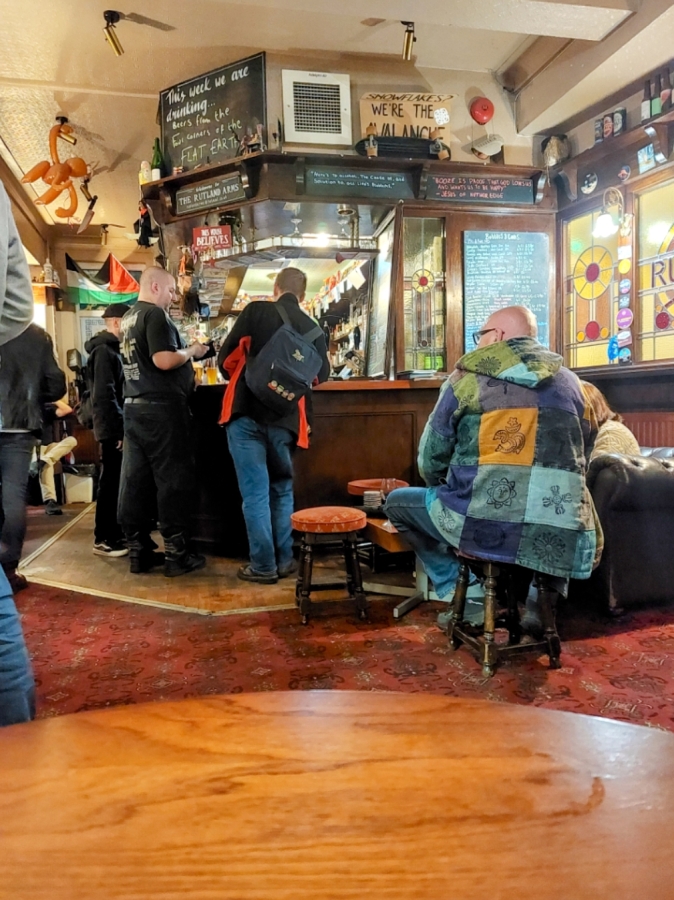 One of the perks of being a blogger is you get to meet other famous bloggers, like Blackpool legends Jane and Lee who visited Sheffield before their team’s emphatic one nil win at Bramall Lane the other week.

I remember (vaguely) when Manchester City matches had a definite result, before they were decided at a VAR review panel at the end of the month. It must be great to leave a stadium knowing the result.

City’s home game was a Saturday 3pm kick-off, a rarity, so Mrs RM had plenty of time to show Jane, Lee, and Karen (a ‘Pool fan who heroically travels down from Inverurie for each game. I delighted in showing Karen my Inverurie blog post, I really did.

This was a genuine Friday night out in Sheffield, lacking only the chip butty and gallon of Magnet, but luckily we made up for it with Kernel and Pastore (who ?).

“I can’t believe you haven’t been to the Rutland Arms yet !” said Jane,

but in truth I was saving my first visit since the infamous BRAPA/Richard/Roger Protz trip in 2017.

Mrs RM and Jane have something remarkable in common. They can both find an empty table in a packed pub.

We grabbed a table just as an Old Boy left, and waited for our Tangerine Trio to finish playing Pac Man or Fifa 1977-78 or whatever it was. I sent a tweet with an old Blackpool programme as a calling card, and sent Mrs RM to the bar to buy some wonderful pints.

Four young lads were pumping coins into the jukebox a few yards away, and suddenly “You Can’t Hurry Love” came on. The Phil Collins version. This only happens in Sheffield’s trendiest pubs; don’t try it in Manchester, folks.

Jane and Lee and Karen had magically found a bigger table from which we could better admire the strains of Toyah’s “Thunder in the Mountains” and Jane could take photos of the Halloween deccies.

You’ll have read Jane’s blog, and you’ll probably know the Rutland, two of the best things in the civilised world.

The beer was great, Jane randomly chose me a Kernel Pale that made me thing Bermondsey isn’t all bad, I cocked up Mrs RM’s food order badly, and I tried (and failed) to decipher the graffiti in the Gents.

Then we had a wander through the backstreets of industrial Sheffield, which look scarier than they are,

and take you a couple of crafty bars that the Old Codgers won’t be visiting when they eventually head to South Yorkshire.

Just round the corner, though it took about 23 minutes to get there and as a male I’m not allowed to admit I’m lost, is the Industry Tap.

Guess what crafty keg I chose.

Pastore’s Waterbeach Weisse is the best thing to come out of my home village since the remnants of Chung Hwa’s rispy Beef and Singapore Rice I brought home last month.

The staff were wonderfully patient with my dithering, and I’m sure the fact they closed up earlier than I thought was nothing to do with my indecision.

Lovely pubs, lovely company from Karen, Lee and Jane, and I slept as soundly as the Loxley Cat.

One thought on “TANGERINES IN SHEFFIELD”