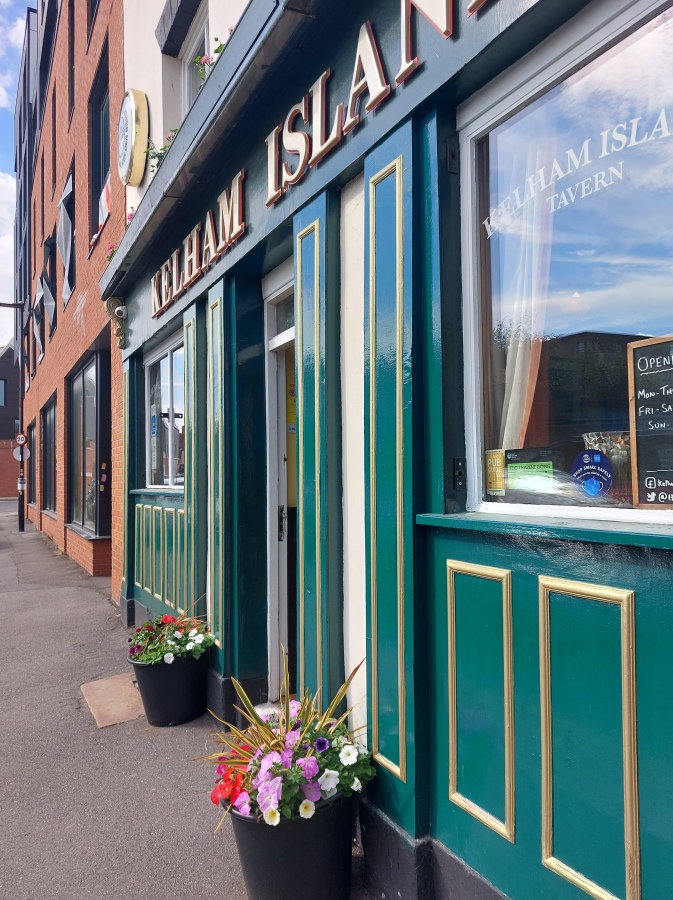 I don’t watch football on telly much, you can’t see the whole pitch and you don’t feel part of it, so tonight I found the pub in Sheffield that wasn’t showing the game;

ALL THE PUBS IN SHEFFIELD No. 32 – The Kelham Island Tavern

Goodness the Sheffield ring roads were busy tonight, everyone rushing to get back to miss the first half in Walkley and Handsworth.

In the Tavern, all way peace and calm.

For the first time, I had my choice of seat in this twice CAMRA Pub of the Year.

It filled up fairly quickly, a stream of folk queueing to avoid Danny Murphy and Wee O Ferdinand. “I don’t mind ANY music, but I can’t stand football” said someone who then debated the Levellers at length.

What a great view of the action. I started with something hazy.

And it went on from there. Shiny Afterglow (NBSS 3.5+), Siren Lumina (3.5), East London Quadrant (3.5). Oh, and some poppadoms and crisps for the balanced diet.

Across the room, a group of regulars vigorously debated the merits of walking against taken the tram from Castle Square to Shalesmoor to save “valuable drinking time“, then ordered a taxi (a saloon car, no less) from someone who seemed to have no idea where the Kelham Island Tavern is !

I checked the score at half-time, published a blog post, ordered that 3rd pint and considered leaving.

But I couldn’t. The beer quality was too good, and the banter beguiling. “You can overthink things, can’t you ?” said someone in a discussion about Worth Matravers and a move to Dorset.

A chap joined me for a chat about Sheffield pubs and let me take a photo of his drinking plans. Possibly for the day, possibly for the month. What nice handwriting, I thought.

The guvnor, a young guy called Josh, chipped in with loads of local pub news and I unwisely stayed for a fourth pint just as Kane tried to take the credit off Sterling for the England win.

And then it happened. The house brew, Blue Bee Triple Hop, was a 5.

Trust me on this. It’s rarer than an England win over Germany. And more satisfying.

I celebrated, unwisely, with a takeaway from Sang Lung.