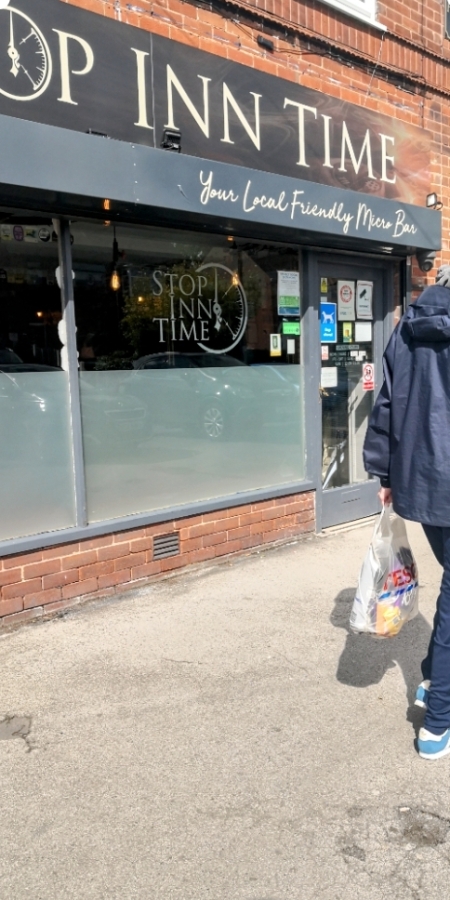 The urban walking up here is great, but niche.

My Monday afternoon stroll involved a bit of tram, a bit of canal, a bit of industrial decay, and my last South Yorkshire tick. That’s what I call a good day’s work.

Junction 34 of the M1 contains many joys; Meadowhall’s Spoons, Greenland, the IKEA from Hell, and until 2008 the iconic Tinsley Towers that so enriched any Southerner’s journey north. The demolition attracted a bigger crowd than Wednesday, United and Rotherham combined.

Your walk from Meadowhall South tram stop starts with a useful fingerpost, but please remember that Kezi and Azad have no current GBG entries.

Neither does Tinsley, which is why local youths have helpfully defaced the local information board.

Follow the canal, which is relatively clean apart from the 3 million discarded copies of the 1999 GBG.

The A631 isn’t going to rival Sheffield’s Valley of Beer,

though the Pike & Heron car wash has kindly kept that iconic green and gold Mansfield insignia.

My wander takes me past a couple of chain dining pubs on the edge of Brinsworth to the Stop Inn Time, where I await a 2pm opening and stare nonchalantly at the off-putting sight of steel shutters on the windows. It is Rotherham, after all.

Obviously I don’t really expect a micro to be open as per Facebook, but the times on the door are worrying as there’s NOTHING to do in Brinsworth for 2 hours and you know how hard I try.

I spend 2 minutes in Tesco Express buying some sparkling water, and on my return the door is opening.

Inevitably, there’s already someone in, drinking Pravha. In 50 years time, beer historians will discuss the role of Pravha in the downfall of mankind.

I choose the foamy Abbeydale Moonshine (NBSS 3=), and occupy one of half a dozen tables for four, expecting a quiet 20 minutes.

Within five minutes, the place is packed, and I feel slightly guilty about taking up so much space.

But I’m not budging. It’s all going off outside, as someone’s wife has been locked his dad (I’m not strong on family trees) in the car and the alarm is going off.

The theme for the pub seems to be “Duff parking by the elderly“, which is a better theme than “Pale beers from Maidstone” or “The Sidcup Beer Festival by Bus” if you ask me.

The average drink is a pint of Merlot with Pravha tops, and a word cloud would show “cushion“, “mucky pictures” and “can’t check in” as the most common phrases.

A very worthy GBG entry to finish my South Yorkshire entries six months after my move, and one that BRAPA will adore.