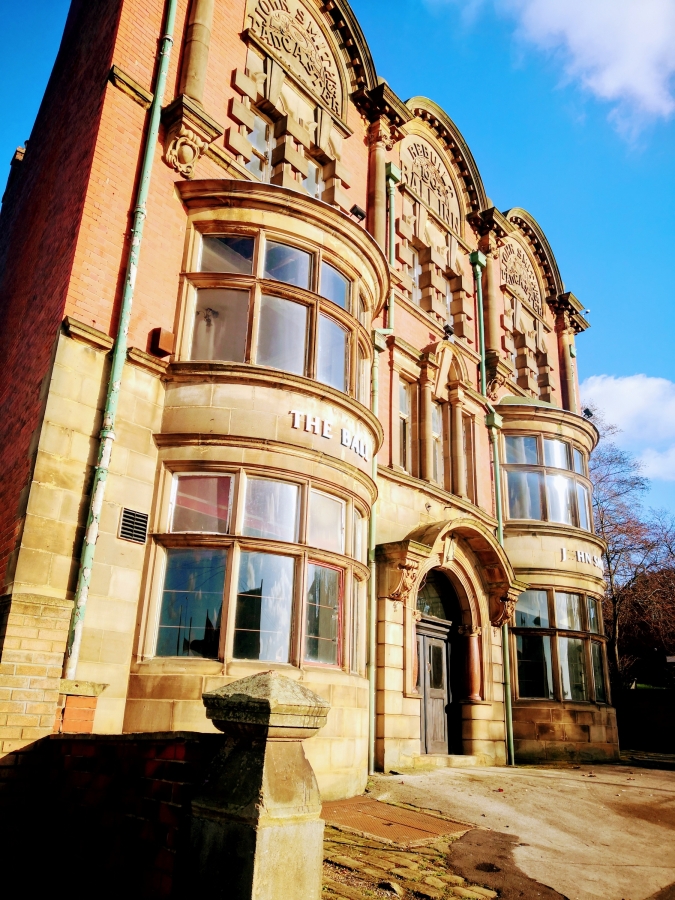 Some people dream of a rich and fulfilling life, enriched by career, family, a sense of civic duty and Chinese takeaways.

While those ARE important, I just want a blog view from Greenland.

I should have been in Nuuk last August on the first part of Mrs RM’s world tour, logging into an internet cafe to leave a comment on my own blog, but events, dear boy, events.

So an unsung industrial suburb in east Sheffield will have to do*.

On the way to Greenland, you pass two contrasting classics on Darnall Road.

This is a classic of its kind.

“I’d like to see inside the Salvation Army Place, definitely. And is that a man with a chainsaw outside the fire station?! Is that what it takes to keep you away?!” says an excited Tarkovsky on Derelict Places, and one can understand his fervour. Note also the font in the Young People’s Hall, design to enflame the passions of Matthew Lawrenson.

A minute on, I stop, stunned.

Yes, in that big splash of mud.

I’ve stood in awe and admired the Taj Mahal, the Victoria Falls, the Calf of Man, Carluke High Street…

But this was truly a “Wow” moment.

Closed since 1993 according to the essential Sheffield CAMRA Guide to Pub Heritage,

Perhaps it’s the sunlight, but it actually looked in better nick than it did in 2011.

Could it possibly open again ? What else could you possibly do with it ?

I carried on to Greenland, a welcoming place.

There’s a long-closed pub/club that neither Will nor Alan made it to.

The Greenlands was formerly the Fiery Fred, a sort of Yorkshire cousin to Manchester’s Fiery Jack by The Fall.

Sadly Greenland was a bit of a let-down, the highlight being these ruins from an unfinished gastropub in Phillimore Park;

Still, the delights of the Olympic Heritage Park awaited. I could barely contain myself.

*And if you think that’s exciting, there’s a Rhodesia and a Wales down the A57.

31 thoughts on “GREENLAND. AND THE BALL.”