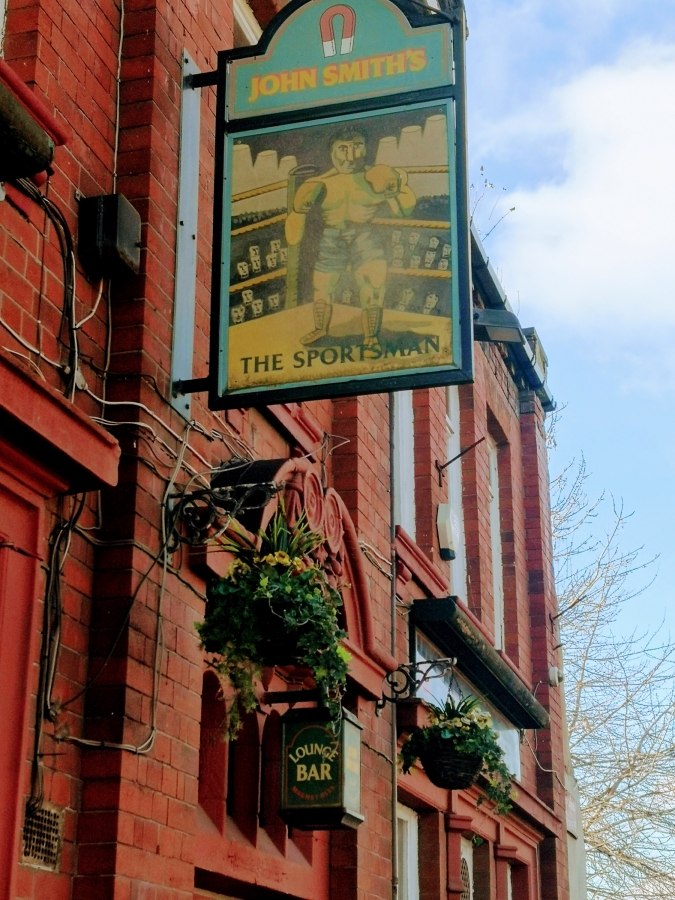 Draught Bass has the best trademark, but John Smiths has the best pub signs. Shame half the Johns pubs in Yorkshire are long closed.

From the Westbourn Hotel (oddly marked as Lynn’s cafe on the map) I headed randomly north-eastward in the direction of Darnall. Whatever that is.

The voyage of discovery takes you past the Athletics Stadium and towards the bodyshops and gulab jamun of the B6200.

“And did those feet, in pre-emptive days, walk upon Sheffield’s parkland green,

and did the mighty hand of BRAP, drop Wotsits bags in roads unseen ? “

There was a closed pub on Staniforth Road, but Mirpuri Dhera retains no Bass or John Smiths livery. It does, however, offer curried deer. Just saying.

What Pub flags up two more closed pubs 8 minutes away through the ancient mosaics of Darnall Park.

This one shows BRAPA leaping over the Rising Sun in Sheffield to escape his admirers.

I sense Darnall receives few visitors, certainly since Will’s raid a decade ago, and my snapping attracts a bit of attention.

But both the Albert and next door neighbour the Sportsman are vacant, waiting the offer from Fierce or Deya to convert them into craft bars. Actually, the Albert might well become a nursery, limiting the real ale offer.

The Albert (see Will’s review here) is actually the pick of the two,

“None of your fancy real ale malarkey here ! ” wrote a brave Mr. Larter back in August 2012, no doubt enjoying a keg Stones while the rest of us were watching the London Olympics Opening Ceremony.

It’s possible the Sportsman (why not The Boxer, its’s full of boxing* memorabilia ?) is going to re-open,

although their Facebook has been dormant since 2011, when it was selling Belgian Blue for £2.20 a pint.

Oddly, the Concertina was only £1.10 a pint when Will made it there a year later, but then that’s Mexborough for you.

*And boxing’s not a sport, it’s just hitting people.