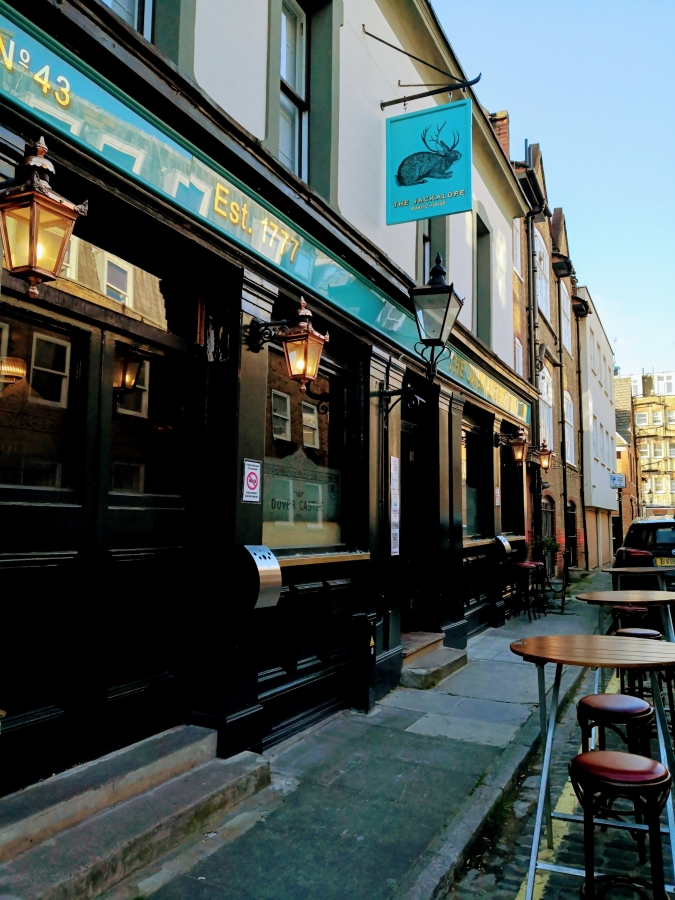 You left me in an alley behind the Harp on Lockdown Eve.

I had a crumpled bit of paper in my pocket, but after five pubs I was starting to feel that doing all 21 that I needed to complete London was, perhaps, a stretch too far.

I know it’s TECHNICALLY possible to drink halves, but at the moment it just seems wrong to spend longer checking in than drinking, especially when the pint is only £2.

So I decided to call it a day after one more newbie in Marylebone and then catch the last off-peak train home.

Hands up who’d heard of the Jackalope ?

Another 20 minutes, mainly slowing down to avoid bumping into people in the West End.

As you can see, London is rather less busy than you’ll remember.

A joy to wander, and wonder where you are, and whether you ought to pop in every Greene King pub en-route, just in case they never re-open.

The streets north of Oxford Circus got ever quieter and quieter, and by the time I reached the Jackalope I realised there’s was more risk of an early close as in Wapping than of no space at the inn.

That frontage looked familiar, very Bloomsbury Group (which indeed it is), but inside the simplicity comes straight from Sam Smiths.

Which indeed it was, when it was the Dover Castle.

Us Beer Guide tickers have recently started a WhatsApp Group (3rd season now live on Netflix) where we say things like “Golly. The Monk’s Habit in Penge USED to be the Queazy Hedgehog in Croydon when it was a GBG pub in 1982/3″. STOP CHANGING PUB NAMES, IT CONFUSES US.

Anyway, I was the only customer, but still managed to pick the high table rather than the benches.

Only one cask beer left, a Redemption Pale that improved from a 3 to a 3.5 despite looking pretty rubbish here;

Any sensible drinker would have gone for the Lees Stout on keg, but sense had long gone.

The lone barman was charm and efficiency itself, but I was glad there was a Mudgie-friendly soundtrack, from “You’re So Vain” to “American Girl“.

Downstairs in the Gents, I stocked up on fashion tips.