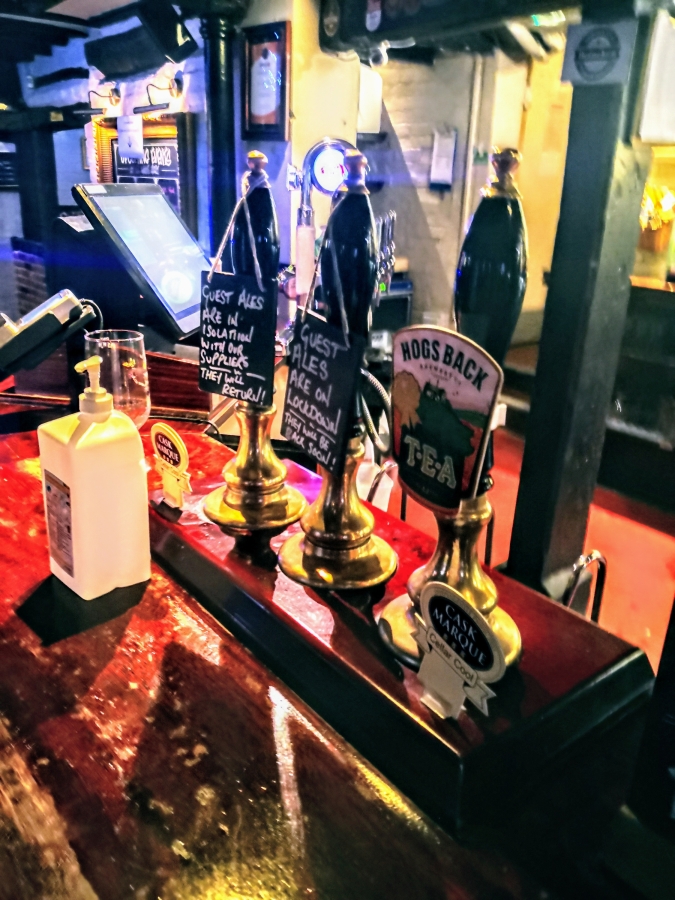 The Pub Bloggers Code states “Thou Shalt Not Visit A Fellow Blogger’s Home Town Without Buying Him A Doom Bar“. That rule was subsequently and contentiously amended to exclude Tonbridge.

Arguably Heathrow Terminal 5 is the home of the Southworth clan, and if they’d really wanted to be in the UK we’d have met them at the groundside Spoons.

But Hook looked easier, we passed J5 of the M3 as he got home from work (whatever that is) and I was jealous as Simon had just met him, accidentally, in Croydon.

I feared Citra would make us go to one of Hook’s many craft beer bars, but instead it was a rambling old trad pub I vaguely remembered from the noughties when the A30 briefly became a GBG hotspot.

I’d forgotten the “Not the Old” bit within 2 minutes, of course.

At least it had Proper Pub windows, but would it deliver the BBB that young Mick loves?

We were escorted to our table away from the bar, but I was graciously allowed to go and buy beer and those Max crinkly crisps while Mrs RM interrogated Citra about her aunt, who lives down the road.

Far too much choice.

Citra went all awkward on me and refused to pose with his pint of Doom, fearing ostracisation from Hampshire Untppd or whatever. Apart from that he was perfect company.

So Mrs RM had to drink most of my pint as well as the TEA. Both average, since you insist.

Not much ale drinking in evidence anywhere in a pub only half full despite the lure of West Ham v Newcastle on the big screen.

Citra, you’ll remember, kindly met me for a pint up the road in March, allowing me an early escape from a family birthday celebration that would nowadays result in instant arrest by Covid Marshalls.

On the way out Citra led us through the maze of one way signs and Handwash, and I STILL ended up getting told off. But at least it wasn’t by Mrs RM this time.

19 thoughts on “HOOK, LINE AND CITRA”