What a great way to complete Cheshire GBG20, in a place I don’t really know, in a bar with uncertain opening hours and three possible names.

Later that night I coloured Runcorn in with great care on the map.

First trip to Halton Borough since a lively Widnes fun pub in 2017 when I tripped over the vacuum cleaner.

Spot the OS difference since 2017.

Yes, they’ve got their shiny new Mersey Gateway bridge, with the toll money probably being syphoned off to support Manchester City’s evil plans, if you believe the press.

Runcorn is home to top beer blogger Kirsty, whose trail of destruction round the Victorian pub heritage is the stuff of Legendz. The town had hardly recovered from Pub Curmudgeons’s spell there in the 1870s.

The Society Tap Rooms (aka Society Ltd aka STR) had decided to move opening from 4 to 5, which was a bit alarming as I had a haircut and a gig back in Manchester that evening.

In my mind the town breaks down into distinct sections.

a) A nice hill in the middle where you can pretend you’re lost and you are.

c) Some Proper Pubs like the Prospect in Weston Village.

d) A Stevenage style expanse of 70s housing surrounding a cheap cinema where I once took our boys to see Alvin and the Chipmunks:The Squeakel (No, it’s no Parasite) in 2010.

e) A bridge to Widnes and the science museum where I spent 2 hours that seemed like 2 months once.

f) The old town with its terrifying Spoons.

I didn’t linger in the Ferry Boat, even for flat whites, though a lad of about six asked me to hold the two doors leading to the loos open for him as “I’m scared of doors“. I expect a civic service award, or n arrest warrant, in the post.

With a whole 90 minutes to get under the skin of Runcorn, I took the underpass to the Town Hall.

The public park housing the Town Hall is a little gem.

Across the road from the Registrar of births, deaths and partnerships lies the Red Admiral, whose “previous management have been heard to say the don’t like Real Ale and therefore refused to have it in” according to the always informative WhatPub. Perhaps Kirsty can review it for us.

Back in town I found this hidden cache of street art.

Then I followed the signs down to the Promenade, which I had all to myself.

The view to Spike Island (yes,THAT one) and beyond to Woollybackland is strangely peaceful,

but it’s the Silver Jubilee Bridge, awaiting re-opening this year, that remains the symbol of the borough. I stood under the bridge.

Speaking of All Saints*, I then admired a view of both churches from the graveyard, replete with the headstones of folk who I’ve already outlived.

And a black cat ran away from me, as well it might.

I popped down to STR, which sounds like the sort of thing you want to avoid, just in case it had opened early, as micros sometime do.

Here it is, underneath the railway arches, firmly shut.

So I strolled back to town, using Google to find Atmoesphere, where I enjoyed lovely service and a coffee and baklava with ice cream, which you’re now looking at jealously.

Back at STR, the door opened on the dot of 5.

A nice welcome in what looked like an outbuilding to the old Co-Op, with seating to delight the Mudgies.

Ooh, Rauchbier. And unmarked handpumps like in the 1940s.

But there was no-one about. At all. I popped to the Gents, walked round the building and looked for signs of life. Nothing.

It’s not the drama you need at your last county tick.

“Are you looking for the entrance ?” said a voice from behind what looked like a food pop-up.

“I thought this was it”

“No, you have to go through the ladies toilets. Follow me”

Suddenly I was in a magical world of art and craft. A bit like the Wavertree Supermarket, but with added CBD (literally).

The lady who served me the local Blueball Stout (lovely, 3.5) was a chatty gem, keen to know about my gig in the Ritz that evening.

Good job I didn’t tell her I’d really come to see Hand Habits, who was indeed worth the 4 hour journney home. 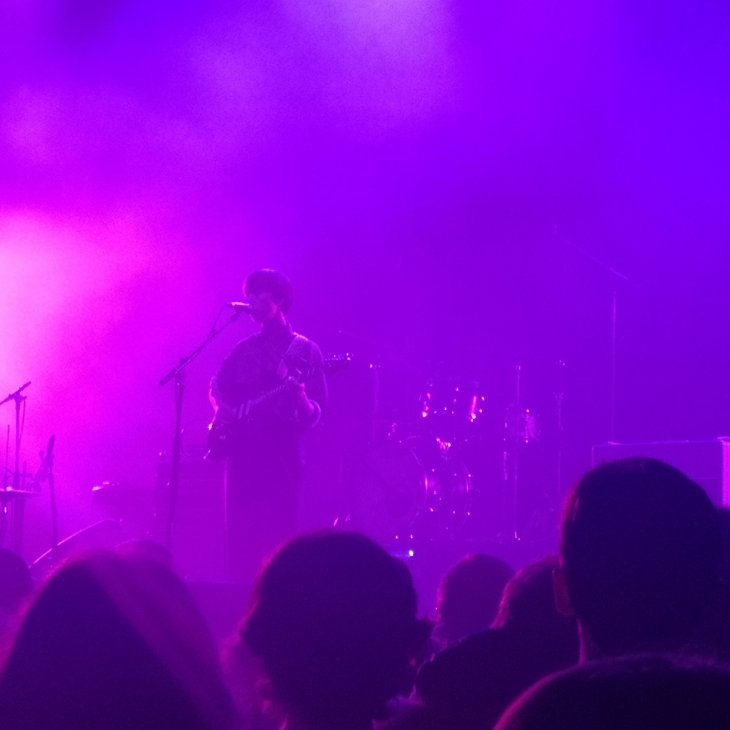