Note:  My Worcester notes are making progressively less sense, and the photos don’t help much. Hopefully Pub Curmudgeon will fill in the gaps.  Whatever happened to Periscope ?  That would have helped.

Before Pub No.8 it was it was time for the traditional Pubs & Beer Forum Group Photo (above).  The fresh-faced folk are the ones who’d had the craft. 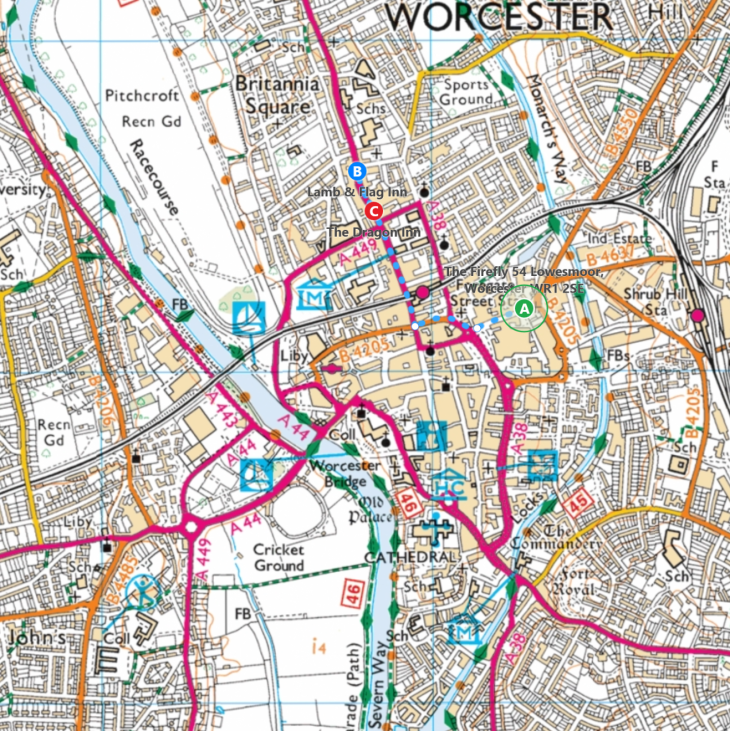 Onto 3 pubs to the north of town/city, with my sole GBG newbie still to come.

Pub 8 was the Firefly, notable for my having absolutely no recollection of it despite scoring the beer quite highly on a previous visit.  It looks a bit “quirky”. Look how blue the sky is.  Only four pints can do that.

What do you think when you see Weihenstephan on the wall ?

We were excited by the beer range.

Yes, the “stylish beer bar with interesting cask, and loads of ads for Vedett“.  A sort of Port St Beer House for the shires.

Memory fades, but the lack of notes suggests that a) much rubbish was talked and b) the Mallinsons (what happened to them ?) was decent enough, without actually causing me to say “Mmm, taste this.  This is what cask ale is all about” (See Mudgie post).

We pressed on to the Lamb & Flag, an addition to the original itinerary once it appeared in the GBG (belatedly).

Confusingly looking a little like a mini version of the pub of the same name in Oxford, but sadly without the Palmers.

Cosy, narrow, ticking over at 6pm, and with some quirky art.

But with the most confused beer range of the day.  Apparently owned by Marstons, but selling Two Crafty Brewers beers (though mainly Wye Valley if we’re honest), and serving Greene King Firebird as a guest.

The beer didn’t stand out, but Mudgie singing along to “Horse with no name” will live long in the memory (if we had one).  He may deny that.

Last of the day for folk with trains to go to was the Dragon, one of Worcester’s long standing free houses.

Now run by Church End and with as many pumps as customers.  Hoorah ! As you’ll have guessed, the Goat’s Milk didn’t taste like the Supreme Champion Beer of Britain it was last year.

Again, proper looking pub, if not quite a Proper Pub.

Some very low lighting and another attractive pub not quite looking “lived in“.  It’s fair to say the BRAPA quotient was a bit low.

We were getting a bit tired emotional now, and trains (delayed), curry houses and Wetherspoons awaited.

“Shall we do that Paul Pry then ?”

16 thoughts on “OUR WORCESTER WARRIORS APPROACH THE WINNING POST”