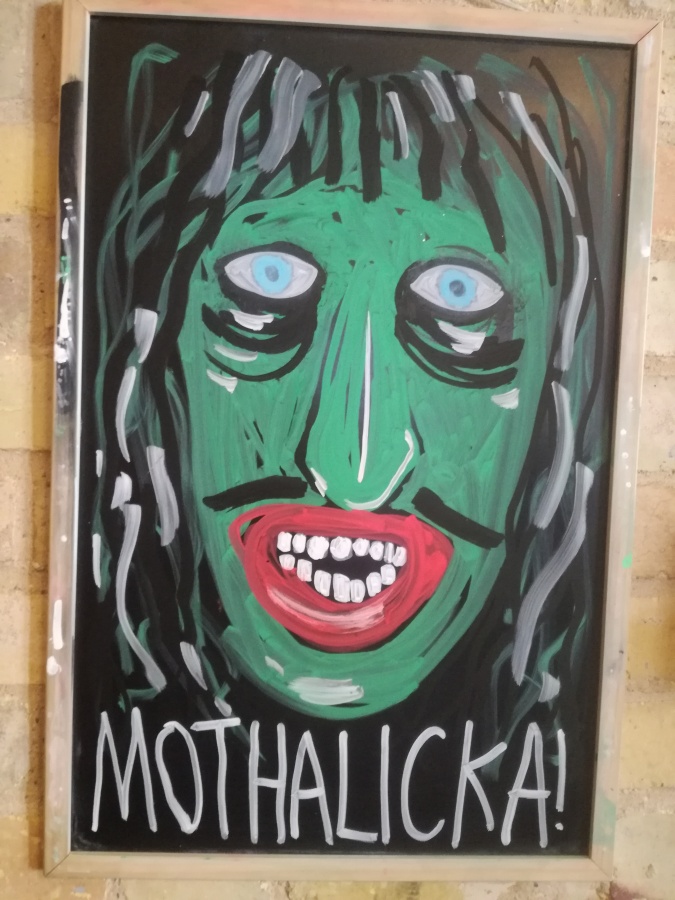 Perhaps my longest blog title so far.  Russ will know. And perhaps Simon will do a response to my response to his blog about Cambridge pubs.

Of course, it’s custom and practice for pub bloggers to slag off the local pubs of each other’s home towns, unless they’re visiting Stockport, of course.

But, as always, Simon is pretty much spot on about my own pubs, which do have a tendency to attract punters of the same shape and inclinations, compared to the “All human life is here” you get in, say, the Black Country.

And beer quality has been lower in recent years, with more scores below my basic GBG standard (NBSS 3) than ever.

I’ve written about the Haymakers before (here). It’s the closest place to me for Milton beers, is full of Post Grad intellectuals eating pizza, and there’s hundreds of bikes parked outside. At times half Milton Science Park appears to have left their geeky offices. Ah, perhaps I can see the BRAPA problem.

“It was like University Challenge pre-season training”  wrote Simon in his little notepad, consigned to the seats near the toilet. 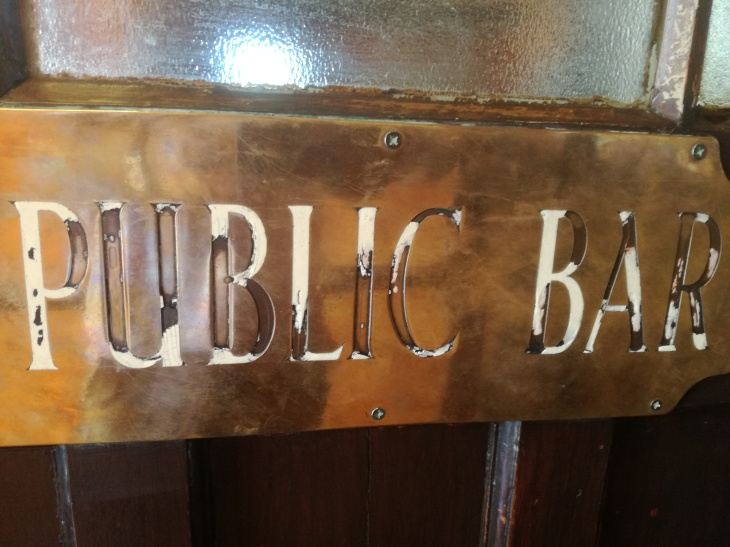 Anyway, I made sure I turned up a) first and b) ready for beer by walking from Waterbeach, which is less fun than you might think in 26 degrees.

Walking along the side of the Cam, a route seemingly not allowed by Bing Maps, saves you 15 minutes but means you get cyclists whizzing past you continuously.  Ring your bell folks, that’s what they’re for.

Being first in means I don’t have to sit next to the Gents, and I get my pizza first, but it does also mean I have to have the first beer of the day.

My normal seat is the snug, but it’s a bit rude nicking that when you’re on your tod.

That said, nearly all the tables are for groups, and I end up hogging a table for four.  If there’s anything to see, I’ll be able to see it.  If the large spoon doesn’t get in the way.

Anyway, the Pegasus is a solid NBSS 3.5, cool and tasty enough for me to declare Simon unlucky on the beer quality front.  The pizza is good too, but of course Si regards food in pubs as a crime against nature, and he’s probably right.

At the bar, I hear someone order the Brazilian (this isn’t a joke, Russ). 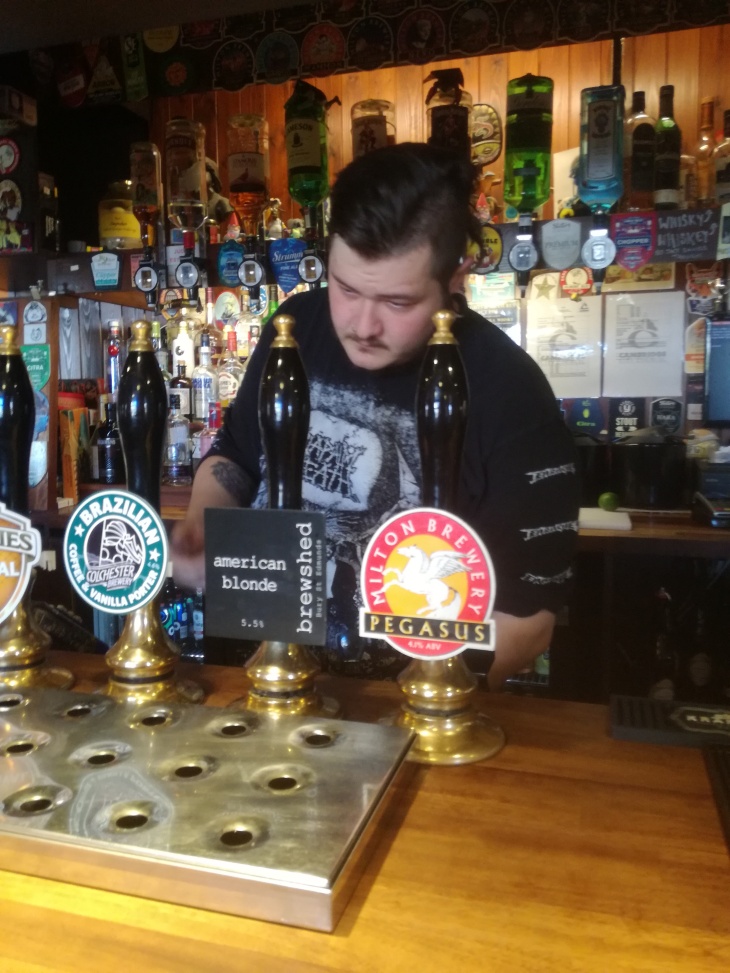 I’ll tell you why not.  It’s a complex beer, but like the Titanic Cappuccino Stout, a very difficult one.  Cool and well conditioned, it takes me all of 17 minutes to finish (NBSS 3.5). 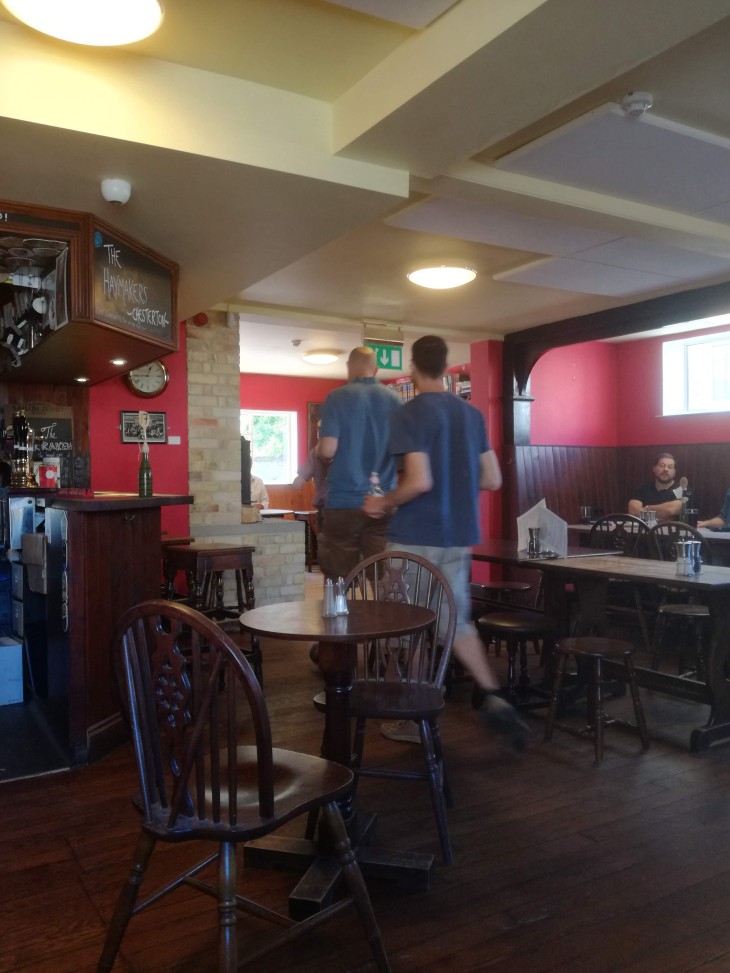 The Haymakers may run on pizza sales but it feels pubby enough for a Tuesday lunchtime, with some folk even braving a half of the ales, though pints of tap water and bottles of Highland Spring are the sherbert of choice.

One group takes their reserved table, moves chairs about, decides it’s too nice to be indoors and moves their spoons in bottles outside, then returns to a different table ten minutes later as “It’s burning outside“.

The man in the Napalm Death T-shirt has seen it all before, and acquiesces to their every wish.

Top staff, top beer, Cambridge Millennial life at its very best/worst.  I order a Tiramisu and a half of Furnival (decanted into a pint glass, NBSS 4), then walk the 5 miles home.

17 thoughts on “WELL I HOPE BRAPA-MAN WILL REMEMBER, A SOUTHERN CAMRA MAN DON’T NEED HIM AROUND ANYHOW”