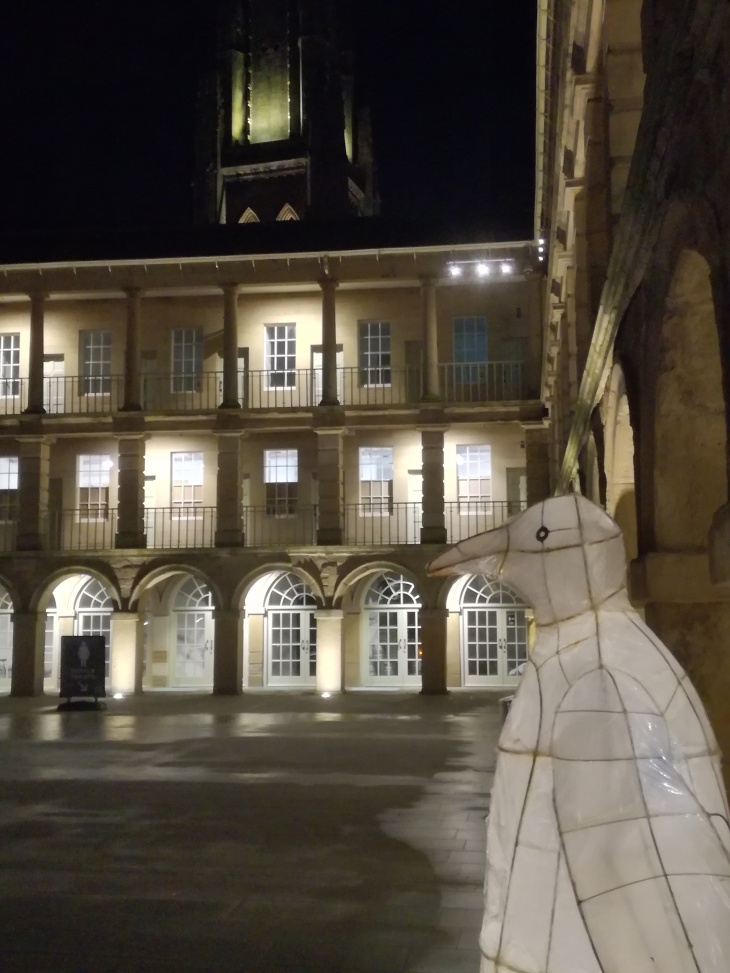 Dick and Dave are keen to see my Halifax piece, which makes three of us then.

The last time I visited, to drop my parents off at a wedding near the Big 6, I was rather blown away by Halifax.

25 years ago, the year the Shaymen first dropped out the League, it felt shabbier than Bradford, no mean achievement in 1993.

Nowadays there’s a spruced up market hall, high quality tourist attractions (Eureka ! and the Piece Hall), live music venues, and those all-important budget hotels. I reckon it’s one of our Top 6 budget nights out (Stockport, Kidderminster, Hull, Ramsgate and Newport the others, since you ask).

My bargain hotel is next to the railway station and the Minster, home to some of the finest cobbles and gothic interior of any church in England.

The Imperial Crown (£31 for a Friday night) managed to undercut the Travelodge and Premier Inn, quite an achievement. And it gives you free biscuits and WiFi.  That’s a bargain, and there weren’t many unmentionables under the bed either.

I turned up a month too early for Nik Kershaw and Cutting Crew; I bet Mark Crilley wishes he was there on the 2nd.

I was here mainly for the two new micro pubs, but also to see the revitalised Piece Hall, which looked at its best at dusk.

Gorgeous. I wasn’t quite sure what it was for, but in the morning I would find out.

Rule No.1 of GBG – don’t get diverted from the ticking of new pubs by classic looking town boozers at 5pm. Sorry, Union Cross Hotel.  Bet the Black Sheep and Landlord are decent there.

I’d already popped in the Pump Room micro once, but last September it was too busy to get served.  I think.

It was no quieter on Friday. In fact, no free tables so it was a high chair again, which is no fun.

You should never pass up the opportunity of Titanic Stout, even in Yorkshire.

The beer was cool and tasty (NBSS 3.5), as always in Halifax, and the crowd were mixed, but it’s hard to enjoy a beer perched on a stool.  Reminiscent of the Samuel Oldknow in Marple.

I know you like poetry, so here’s a poem about the Pump Room and it’s strict adherence to the Herne Rules.

Well, it may say “Laughter is the only music you’ll hear”, but I definitely heard the definitive version of “In the Air Tonight” playing.  And no, it wasn’t even 3 minutes to midnight on New Year’s Eve.

Very new wave of micro, very quirky, but quirkier was still to come…

17 thoughts on “HALIFAX – THE FINAL PIECE IN THE JIGSAW ?”