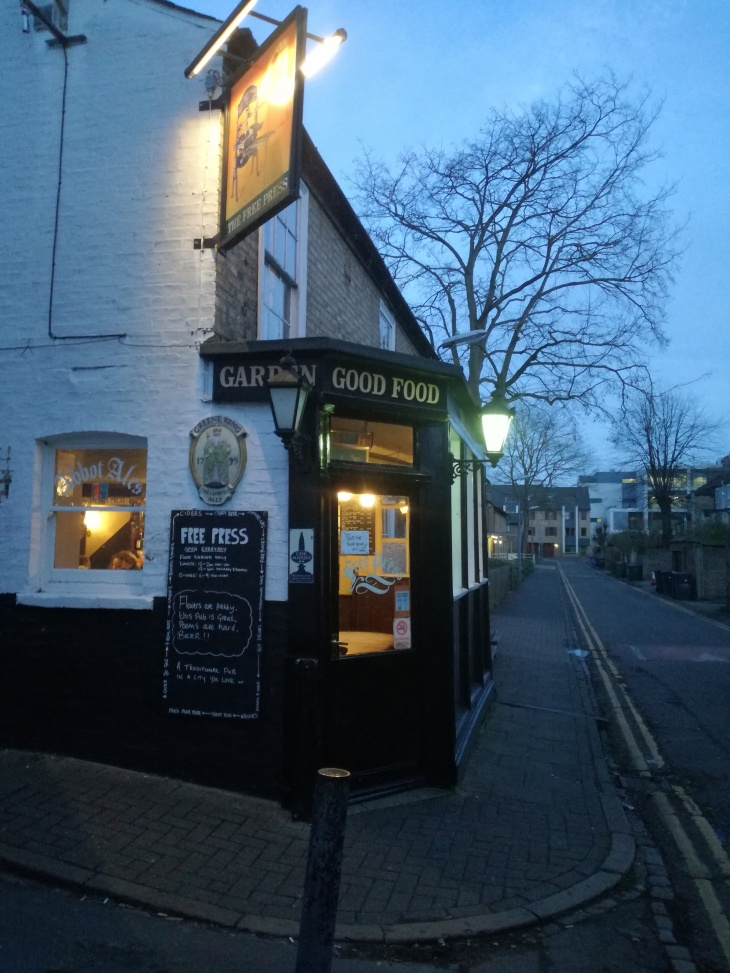 Just tidying up some posts last night* I noticed my pub photos post lacked anything from Pints and Pubs, a heinous crime.

P&P, as his mates call him, has produced the essential body of work on all the Cambridge pubs over the last year, finishing with the venerable Free Press.  So here’s a photo from that post combining a warm fuzzy pub atmosphere and the sticker from my first Beer Guide (1994).

The day after touching down at Gatwick, I fancied a pub.  Not so much beer, just a warm pub on a dark Wednesday afternoon.

Plenty of proper pubs in town, but few open all day, so here’s my contribution to taming Dryanuary in Cambridge.

The well-off residents of Prospect Row have a choice of 4 decent pubs within a minutes’ walk, so there’s really no excuse for sobriety (or drinking Prosecco at home).

I made my first tentative steps into the mysterious world of real ale here with pints of IPA while studying Accountancy on East Road in the late ’80s, though I spent 3 years believing it was called, and asking for “Ipper“.

The pub has barely changed since then, bar the death of the white rabbits in the “garden” that Mrs RM and I grew attached to.

Nothing greets you better than drip mats, newspapers on the bar, old handpumps and a wicker waste paper basket.

In a rare outlet for the dark Mild, I obviously went for the IPA, sporting the same pumpclip I remember from New Year’s Eve 1989.

At 4pm there was a table of Post Grad students in the right-hand room. There are always 20-something Post Grads in the Free Press, and some of them will always be American.  They tend to sit in the corner and leave the Old Boys to their regular seats at the bar.

I’ll say this for Americans; they love English pubs and give great banter.

“He’s a small time dealer but marijuana is legal in California now, isn’t it ?”

And lots of stuff about ABBA, “salty and peppery hair” and setting up a coffee/bike match-up.

It was great.  They were there the hour that I was and didn’t go beyond their lone beers (Harviestoun Engine Oil out of the bottle, oddly).

My IPA was greater.

Now some of you will say that Greene King IPA can’t be scored NBSS 4, but I just have.  A beer to savour (it took me 20 minutes) with a gorgeous foamy head and lovely lacings.  It was as good a beer as it was on the last day that Chris and Debbie Lloyd left for the Cambridge Blue, which is saying something.

Despite a soundtrack of Coldplay and Paul Simon’s “You can call me Al“, I stayed for a second pint.

By this time the regulars had turned up, joining a schoolboy doing his homework at the bar, which I confess I love to see in pubs.

I went for the Dizzy Blonde, though being non-sexist and so as not to upset Mrs RM I only asked for a “Blonde“. It was just as good; cool, complex, full-bodied (in a beery way).

I’d forgot how enjoyable it was to read the Daily Telegraph in a pub.

I’d now spent nearly an hour here, and a third pint called, but I resisted.

A young couple, one of them in corduroy, came to the bar.  She asked for a non-alcoholic beer.  No go. “Pint of Greedy Goose then“.  And just like that, her Dryanuary spell was broken.

No rabbits, but still a properly basic outdoor area and toilets to rival the Sun.

In fact, this is a Top 100 pub for virtually anybody but the Greene King hater, with only one flaw I can see;

If I missed places like this in Los Angeles or Las Vegas, do let me know.

*Actually 2am as jetlag has kicked in.

24 thoughts on “EPIC DRYANUARY FAILS AT THE FREE PRESS”