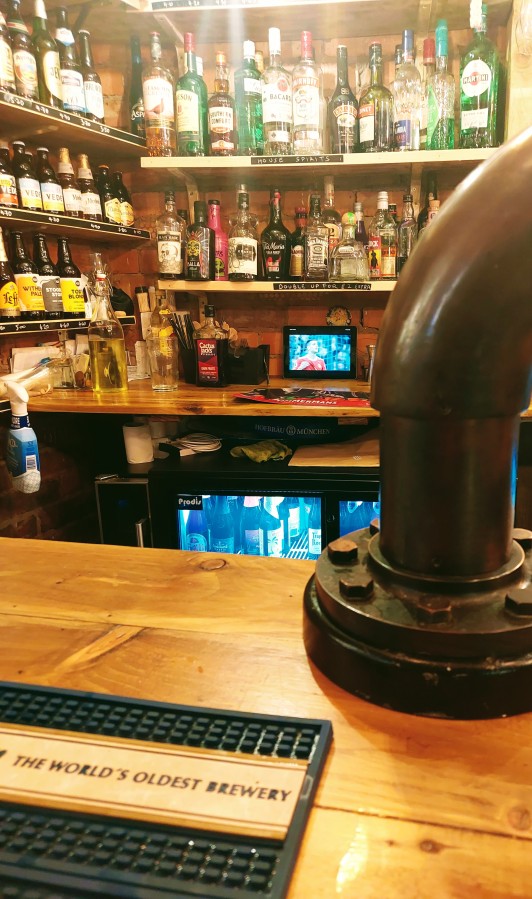 Our Welsh trip had ended, but with Matt wanting to meet up on the Sunday morning we decided to park up in Greater Stockport.

It’s one of our favourite campervan overnighters, but the exact location must remain top secret so no-one else stays there and dumps rubbish outside their van and gets the place shut down for campers.

It’s a lovely spot, country park on your doorstep,

statues of the fish finger bloke in the high street,

And not only because they had a special showing of United’s latest catastrophic defeat at Palace.

or a soundtrack of the whole debut Stone Roses album, which I like despite myself.

It’s sort of sectioned off into sort of booths at the back, which is OK but the booths would fit the whole of east Cheadle so you always feel like you’re hogging a table when there’s only two of you.

I had a pint of something hazy from Tiny Rebel and it was superb, NBSS 3.5/4 stuff, particularly as the 4th Palace goal went in.

We’d have stopped for a nightcap at the newish GBG entry,

but Mrs RM wanted to finish off that bottle of Malbec she’s procured in Welshpool.

So poor BRAPA, coincidentally in Cheadle AT THE VERY SAME TIME, missed out on a lift to Stockport train station from the James Watts.

And Mrs RM never did get to meet Colin. It’s a bit like “Sliding Doors”, where Colin is played by Gwyneth Paltrow.

7 thoughts on “MISSING BRAPA BY MINUTES IN CHEADLE, CHESHIRE”