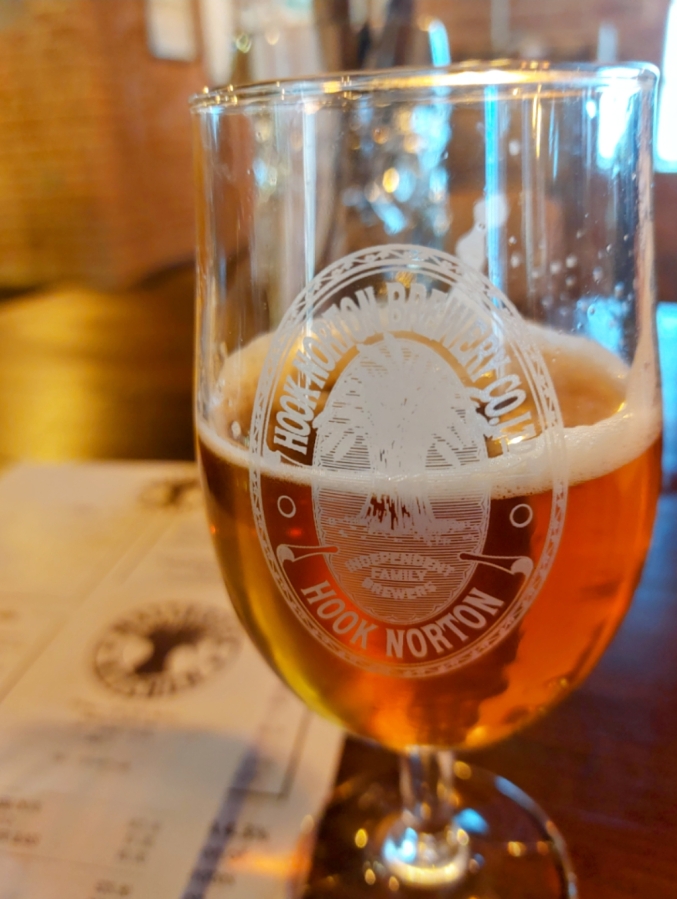 A week after our triumphant return from the Northern Tickathon, we were off again in the (as yet unnamed) campervan to tackle the south.

Only 2hrs 20 to the Hook Norton Brewery, almost exactly half an hour more than it toock from Waterbeach on my only previous visit in 1995.

Yes, 1995. Before the internet, colour telly and guest beers. We took Sis and (ex) Brother-in-Law for a weekend in Ludlow via the Cotswolds, and after a pint in the Pear attempted to have a look round the brewery (I was young then).

There was no-one around, so we had a good look around in the gristing shed and wort dorm, or whatever breweries have. Our interference may have accounted for the poor quality of the Hook in Banbury that year.

“Is it OK if we have a look around the brewery” said a quick thinking Wayne.

“Oh, no. Definitely not !” said the lady. I will never forget the accent.

26 years later they positively welcome visitors, and their cafe is in the GBG with early closing hours to annoy BRAPA.

On the upside, the handpumps are nice.

And their lunch menu is simple. But it’s £7.50, NOT £7.5. That’s 0.5 knocked off your NBSS scores mate. We both had the Ham, Egg & Chips, which was more transport cafe than Cotswold gastro but I like unfussy. It’s why I married Mrs RM.

The place was full of gentlefolk couples at 13:30. None of them appeared to be drinking alcohol, let alone beer, so I’m at least able to express relief that my Hooky was a crisp, chewy 3.5.

Now, if you want Hooky at its best, you need to head here NOW.

It’s worth doing the Peyton Arms just for the idiosyncratic Sunday opening times.

But if you can’t wait till 5pm and want to enjoy the worst cover versions of 60s hits on a tinny Hi-Fi on the planet, I’d go to get Hooky at its source.