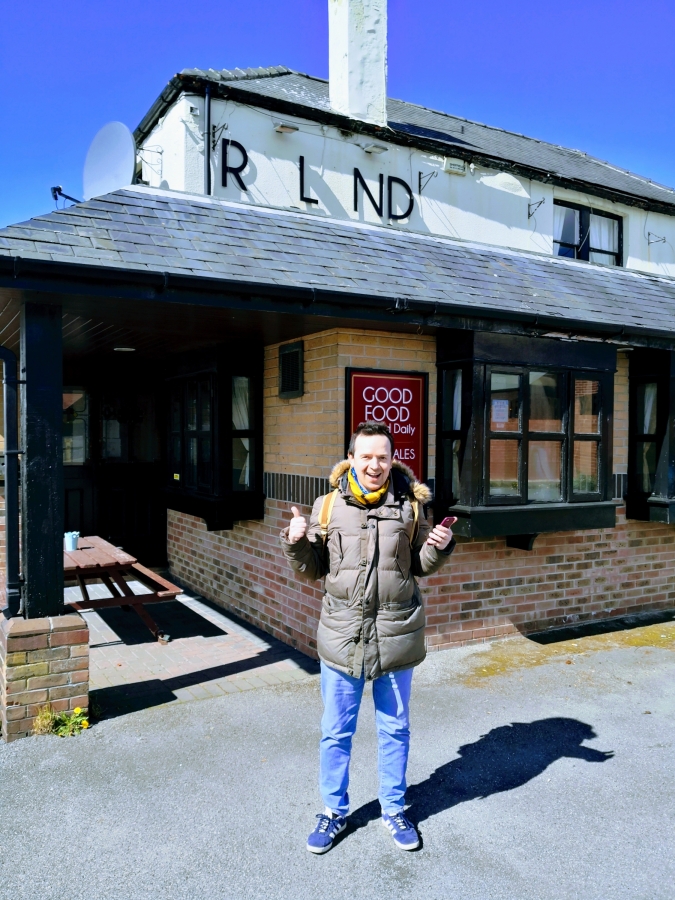 Enough about me propping up the Timbo profits; it’s time for BRAPA.

In his landmark post on pub ticking last week Simon told us;

“Next weeks outdoor April 12th re-opening will bring some limited localised joy shivering under the snowy umbrellas of York’s Fox and Golden Ball, but BRAPA will not recommence until I can do it ‘properly‘ “

But life is all about NOT making plans and sticking to them, it’s about NEVER making a booking, in fact. And at 11.27am I found BRAPA standing in the drop-off at Sheffield station, famous green pen at the ready.

Just as I was about to force the Aygo (199,377 miles and counting) into one last effort over the hills, the phone rang.

“Martin, can I ask you something“. Darn, completely forgot about Mrs RM and her root canal surgery that morning*.

Couldn’t say no, could I ? I sensed I was still going to be DES though.

We gave him a tour of our garden the Norther suburbs and then headed west east on the A57 to the Roland Arms at Aston, where the “O” and the “A” had had taken flight after news of BRAPA’s visit went ahead.

Sadly, I didn’t have time to take pictures of Aston, also known as (among others) Aston-cum-Aughton, and Swallownest, and Woodhouse. Anyway, a Rotherham mining village, which means you’ll be spending your summer holiday here exploring nearby attractions like Gullivers’s Valley in the Rother Valley Park.

But on the 12th April 2021 all you needed for your entertainment was an outside table next to some Professional Drinkers with a dog that didn’t attack Mrs RM and a “Wellerman” ringtone.

I have to tell you, I’ve rarely been so excited as I was when the young barmaid approached our table with the artisan beer menu. Mrs RM was delighted to have survived root canal surgery, and as for BRAPA…

Yes, in his first tick for 4 months, it was Smooth or Carling.

“I’m not even sure what ale is ?” said the cheery lass; our hearts leapt out to her.

In some parts of the world this is where the Real Ale Twat gets up and leaves, but God blesses the easily pleased, and I have it on good authority that the John Smiths was drinking well.

I have it on authority that Prince Phillip was a John Smiths drinker, so those pints were for him.

Your DES went for the diet coke, but the gas machine was warming up, so I went craft soft.

We watched in awe as trays of gleaming amber liquid were brought out and taken behind a secret screen to the lads of the village.

By 12.30 there were a couple of dozen sinking their first pub pints since who knows when, and life felt good.

I even got to pop to the loo, which seemed to be taunting Simon.

and view the owl, which seemed to be asking Simon where he’d dumped Martin (not me).

There were turned around hand pumps, including 61 Deep, on the bar, but who cares ?

Thank you Roland Arms, next.

*Live streaming of the surgery was exclusively available to Patronised readers yesterday.

24 thoughts on “PLAYING DES WITH BRAPA”