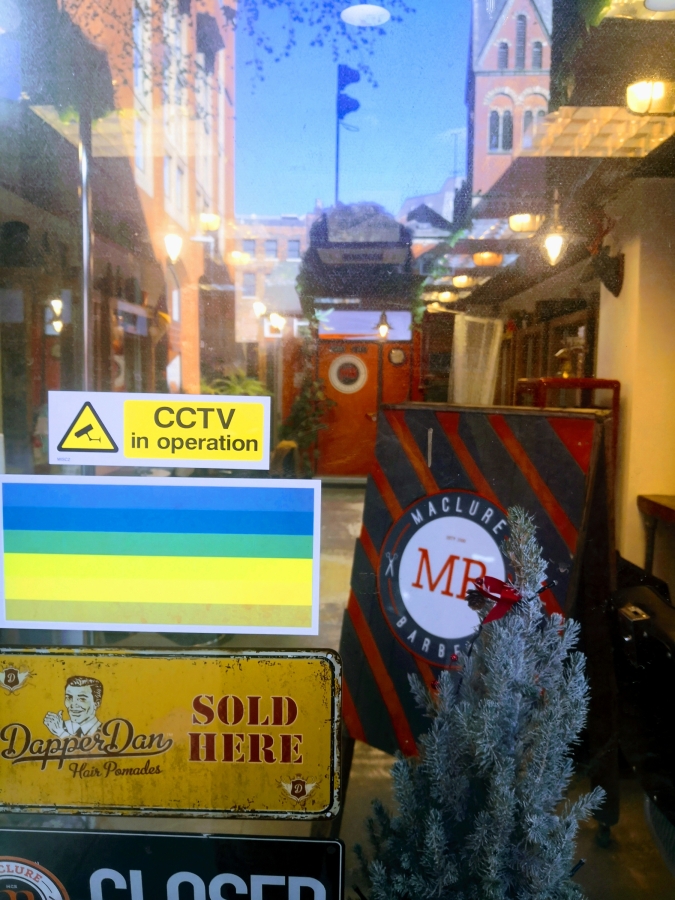 No, not a tribute band performing deep cuts from “Pelican West“*, but Part III of “Manchester in the sun” as Matt, Emma, Mrs RM and myself conclude 3 hours worth of mild exploration of the world’s greatest city by re-crossing the Irwell into Spinningfields.

The Canary Wharf of the North ? Possibly. This posh office/bar area isn’t much good, unless you like tall shiny buildings housing accountants and another chain of The Ivy (top), which we concluded we weren’t expecting to re-open on the Glorious 12th.

Don’t worry, you’re a mere hop, skip and jump across Deansgate to Lloyd Street where the understated/underrated Rising Sun and Old Nags Head greet you.

I got the soya lattes in from Cafe Nero (best of the coffee chains, agrees Emma) while Matt headed to his barbers in Brazennose Street (great name).

They’ve been building in Manchester, you know.

Maclures Barbers is tucked into this little courtyard just off Albert Square, next to coffee shops, Greggs and the Little Gem where Tony Wilson‘s funeral was held.

Matt popped in to set up the on-line booking system while I looked in jealously.

If you’d given me a choice between a Doom Bar in the Spoons and a haircut there and then, I’d have been torn.

A pint of Moonraker in Duttons would have made it an easier decision.

Some serious investment in pavement drinking at Duttons and the Slug & Lettuce next door. If we don’t see Mudgie and Cooking Lager sat there in the cold on Monday 12th then we’ll know they hate pubs, won’t we ?

We ambled back, avoiding the “Kill the Bill” protest against a rumoured Tarantino prequel, and noted how Manchester glistened.

Is this really to be the new Brew Dog hotel ? I want to shower in beer, possibly the Jet Black Heart.

Quite a contrast with its soon-to-be neighbour, which I’ve NEVER been in despite the promise of GK IPA.

But which Oasis lyric, eh ?