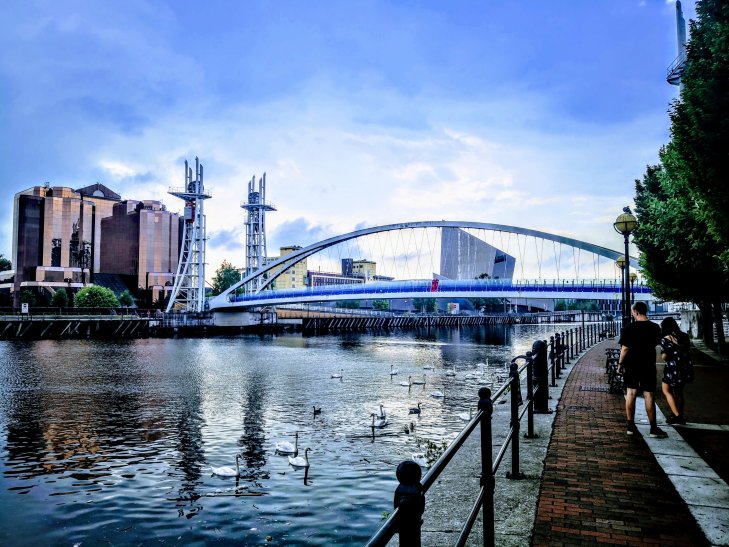 Back to birthdays, as Matt reaches the age immortalised by Paul Hardcastle in 1985.

“19” was about Vietnam; Matt has only to contend with the fine burghers of Ordsall temporarily deprived their Holt pubs.

Mrs RM was busy, probably queueing for Primark, so I took James up to meet his brother in Ordsall Park. 2:55 hours, fastest ever trip to Manchester. 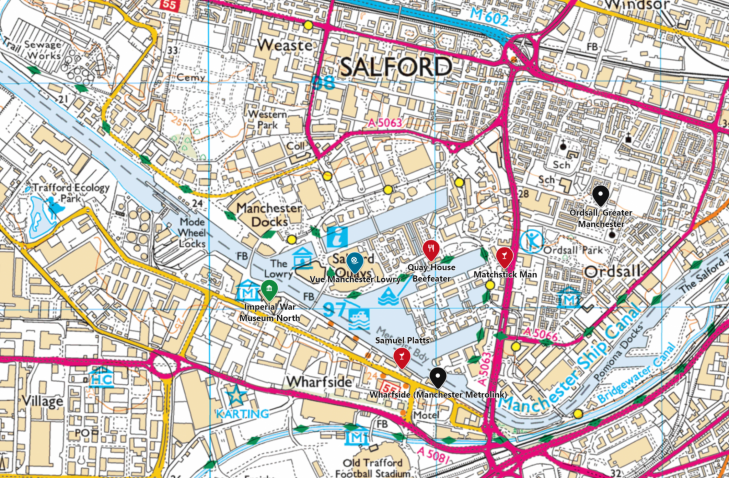 Today was a weird day in M5; sunshine/lightning/hail/downpour/sunshine.

I brought my ray of sunshine and persuaded Matt and Emma out for a birthday walk in the Quays.

The street art, often the gift from visiting German fans, is splendid.

I’d hoped to take Mrs RM some craft murk back from the Salford Taps like Marble, 7 Brothers and Pomona, but I was too early/late in the week.

Not a lot of pub, open or closed, on the way to the BBC and Corrie. The Hungry Horse across from Matt’s flat has a wonderful tribute to Lowry.

But the architecture, wow !

You could be somewhere European, like Bilbao or Glasgow.

There were a few families out and about evading the Canadian geese by the Blue Peter studios, but no pop-up ice cream or takeaway beer sales to detain you, in sharp contrast to the innovative selling I’ve seen in Cambridge recently.

Even the gnomes of Gnome Island weren’t cashing in.

I do like my urban/industrial walks, even without a pub.

A notable shortage of loos, so I had to take a leak at O*d T******d next to the statue of United legend Clayton Blackmore, thankfully not captured on camera.

Quite how Mrs RM will cope when we pop up again for a picnic on Sunday I dread to think.