You STILL on January, retiredmartin ?

Well, I left you on a cliffhanger last post, which feels a lifetime ago.

Would I find somewhere to eat on the Cannock/Walsall border or starve to nothing a mere 472 pubs short of completing the Beer Guide.

Since that last post I’ve actually finished Kent AND Greater Manchester Guide chapters, which you shouldn’t think about too much.

My penultimate Staffs tick, ensuring a tickertape reception outside the Artisan Tap tomorrow, was in bucolic Brownhills.

Some great street art for you.

I know people in Walsall who read this rubbish, so let me be clear. I like Brownhills; the Royal Oak (RIP) was an Art Deco cracker, there was a giant indoor play area our children loved and the curry is hot and spicy.

It still has some superb shop tiling,

and a giant mining statue that towers over the puny efforts in Burntwood and Rugeley.

But recent years have been hard for the High Street,

and my only culinary option before the micro opened at 3pm was the Sizzling Pub, which at least provided refuge from the drizzle.

Clean and cheerful, and probably more pubby than your local Spoons, which I sense 88% of Brownhills would prefer.

But the food was mediocre, a “Backyard BBQ Beef burger topped with BBQ pulled pork, Monterey Jack cheese and onion rings” chosen because of the artisanal American cheese being completely tasteless. And more expensive than a Spoons.

Two ladies, toddler in tow, sank pints of Stella and Strongbow and compared plans for Friday.

BRAPA would have preferred the Sizzler to the Jiggers Whistle, though I commend it for opening up early when I walked past and saw workmen in at ten to three. They were decorating the pub rather than drinking the Gentlewood First Frost.

Nice guy, told me they’d made a mistake in the specification for the miner and built him 30 feet high in error. Detail, detail. 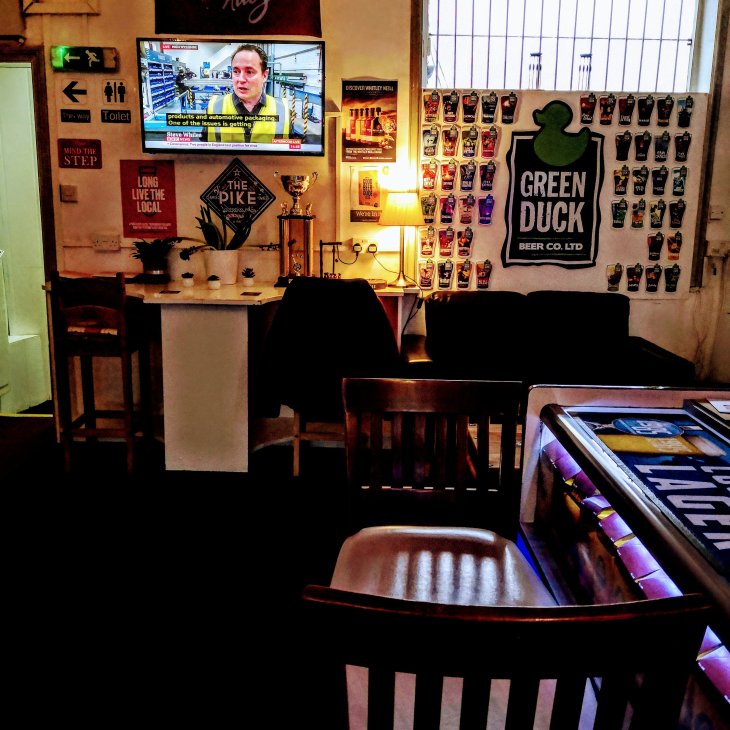 So another micro to finish the West Midlands for another year, though the last two are pretty much the only left boozers on the High Streets of both towns.

Not much sign of the Herne rules being followed anywhere, and hurrah for that.