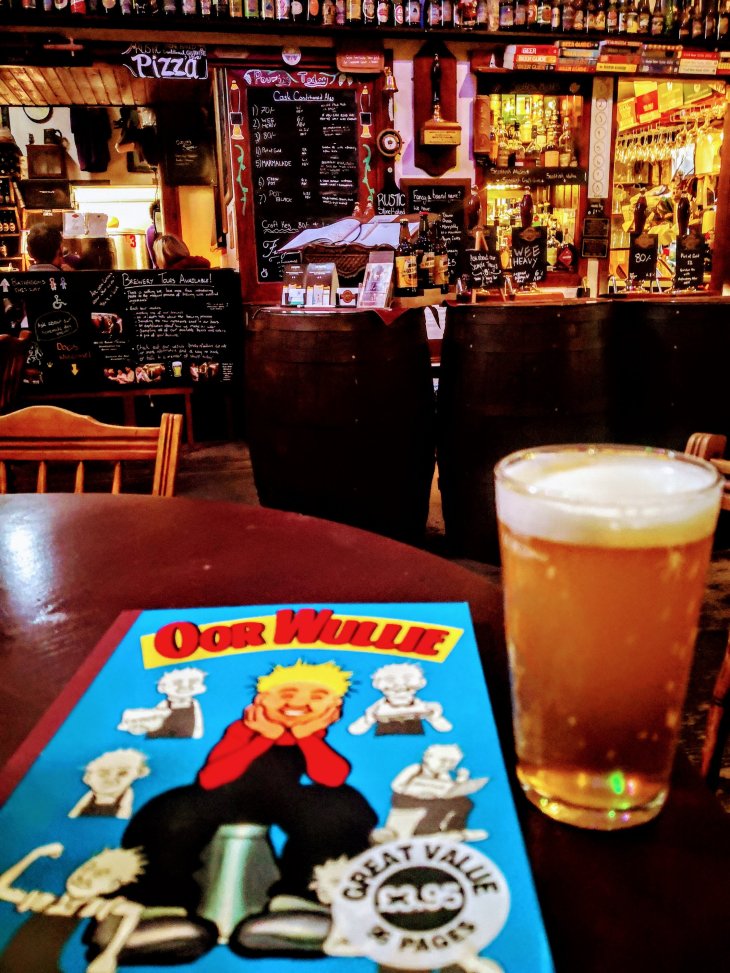 Some fast paced ticking action now, as the No. 54 brings you to the heart of Bridge of Allan, birthplace of Judy Murray, the most powerful woman in Scotland.

Another Scottish town with a population between 5,601 and 8,901 to add to the growing list I was to tick off on the trip.

Between Stirling Uni and the massive tennis court of Dunblane, Bridge of Allan looked a charming one street sort of place that I nominate as “The Wheathampstead of the North” to annoy someone.

Cafes, boutiques, ice cream and a brewery tap emitting an astonishingly attractive smell as I descended the steps from the main street.

It looked a bit ramshackle from outside, and I always expect these places to be unexpectedly closed as BrewDog have bought up all the water or whatever it is that beer is made of these days.

But Allanwater’s Tap was open, and astonishing.

Half a dozen folk spread out in a cosy pub that made the best of its surrounding, and was packed with authentically Scottish reading materials.

An eclectic soundtrack had reached “Music From The Big Pink“.

The young barman was, as young people invariably are, chatty and helpful as I dithered over a range of beers that was greater than one.

The first half, possibly the 70/, was end of the barrel. Unless it was meant to taste like that.

Our bar hero had a sniff, had a taste and went “Ooh, thanks for telling me“. He went off to do something complex in the cellar, and when he got back produced a half of the same beer that was somehow nectar.

Always take your beer back, folks. Even if I don’t.

I left to the sound of Nick drake’s Pink Moon. Perhaps a pink-themed playlist, but I didn’t stay to find out if Lily the Pink was coming up next. I really should have.