A whole week of Scottish posts and I still haven’t got to the Big Beery Breakfast Session with Stafford Paul.

First, have some more Cupar photos from my morning pre-train stroll. Hopefully Citra can identify these flowers.

Disappointingly, if understandably, WhatPub is bereft of details on the many keg bars like the the Station Bar and Parsonage that dot the two main streets.

I haven’t added to the Fife store of pub knowledge either, bar my NBSS score for the Boudingait, so I’ll never know if the lone Deuchars handpump in Watts is for show.

Some lovely buildings, and a range of fonts to delight Matthew Lawrenson.

Westport offered Onion sets and Fat Balls, but I had bigger plans for breakfast.

During the build-up to the CAMRA AGM there had been much debate about the merits of Fisher & Donaldson‘s famous Fudge Doughnuts.

I may have been the only disciple of stodge to track them down to Cupar, where I actually settled for an impressive bacon roll and black coffee.

Look at the healthier options !

I think we can guess what’s buried in the time capsule, can’t we folks ?

Three fudge doughnuts had a rough journey back to Waterbeach in the pockets of my raincoats, but seemed to be appreciated by the Taylor family regardless.

Nice small town, decent base for the coast, a great place to clog your arteries.

Time to catch the train coming round that bend. 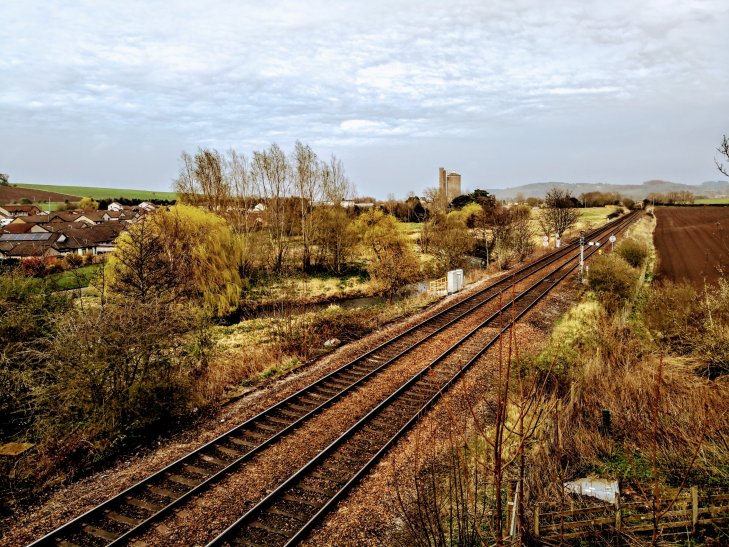