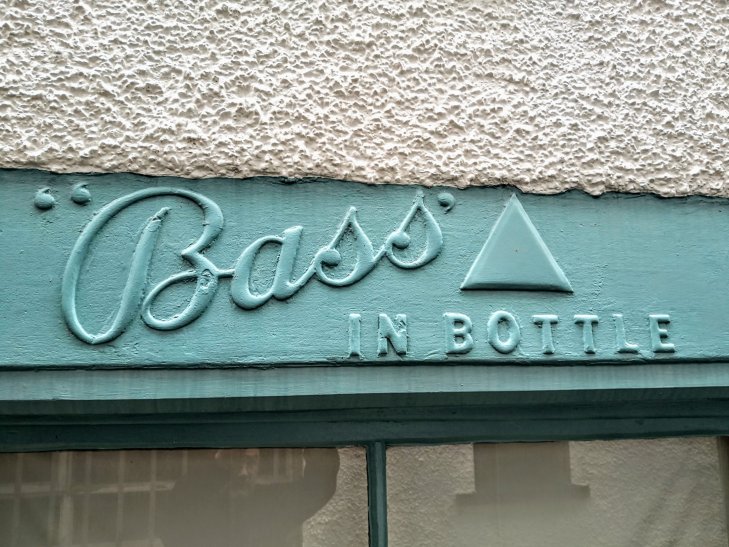 My last night in Scotland, and where better to end this trip of a lifetime than in Cupar.

Three things brought me to Cupar.  A cheap train to Edinburgh in the morning, a GBG pub and the simple fact I wasn’t paying £109 to stay in St Andrews.

Not that my Sunday Guest House here was a bargain, £45 for the  spotless Brae Cottage.  Lots of golfers and Americans and American golfers stay here rather than the posh Golf hotels, apparently.

Few come for the pubs, I suspect, and that Bass signage couldn’t be prised loose.

It was quiet at 5pm on Sunday afternoon, with no takers for a Watford v Wolves semi-final here either.

Remember, though, that supermarkets can open beyond 4pm on Sundays, (thanks Nicola) so I guess that’s where the 9,000 residents all were.

OK. Half an hour is enough. Then you head to the pub.

Perhaps the only Boudingait in the Guide. The couple in the Brae made it sound sinister.

It shouldn’t really work.  Family diner, bar flies blocking the three pumps, a dog drinking from a bowl on the bar…

But you never can tell with pubs, can you ?

“Which is your fastest seller ?” I asked the welcoming landlady.

Our decisive Landlady then pointed out a spare seat, which shows a bit of awareness.

A nice seat, too.

Old Boys in cardigans, toddlers dropping their toys, “Fast Car” by Tracy Chapman. There’s space for the pleasant pub among the craft bars and edgy Embers.

A decent pint of Harviestoun, as you can see, NBSS 3+. I even saw someone go back up for a second pint of it.  Should get an awards for services to Scottish cask.

I couldn’t really stretch a pint out beyond half an hour, so I popped out to Tesco for a DIY tea.

When I got back to the Brae, I underwent “torture by Brexit debate” as the owners told me what they thought.  Fortunately, they thought right.