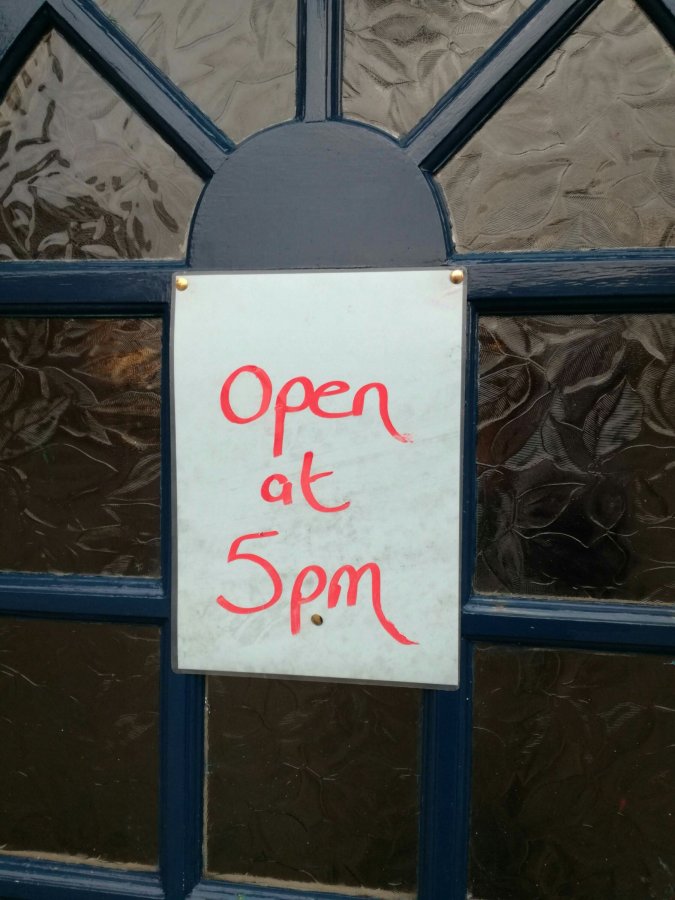 Just to prove that “Pub Bloggers Are Good People, Even If Beer People Aren’t“, here’s your hero on Solent Radio this morning, sounding surprisingly sane.

Simon recounts the joy of a three hour trip to a closed pub in Chaldon Herring, capturing something of the dedication us tickers have to the cause.

My “Closed Pub” misfortunes in Gurnage are about as dramatic as a Haysi Fantayzee LP against BRAPA’s “Lexicon of Love“, another LP on rotation on the Isle of Wight. I’m grateful to the mysterious David (surely not his real name) for pointing out the Wight dialling code is 1983.

The Southern Vectis No.1 bus to Cowes failed to provide the thrills, spills and bellyaches of its western cousin.

The bus dropped me at the round house stop, coincidentally opposite an actual round house,

leaving me only a 5 minute walk to the Portland, another one of Wight’s endless supply of open-all-hour pubs.

That was nearly an hour to wait. It would take me an hour to walk into Cowes and back for my last two pubs, so I decided to hang around and “Do Gurnage”.

You’re a hardy lot, but I think Doughty Newnham Chartered Surveyors office might be too much excitement for a Monday night (or 1959 if you’re in America).

So here’s the bay, down by Gurnard Sailing Club. Seen better, seen worse.

I was desperate for a comfort break I’d been saving for the Portland Inn (always the way), but of course posh retirement villages like Gurnard have very little in the way of natural amenities, so I had to find a secluded spot as far as possible from civilisation and the scout hut.

It would be lovely to tell you the Portland Inn was worth the wait, but it was one of the most efficiently ordinary pubs I’ve ever been in, an amalgam of every Surrey diner in the Guide.

That’s not a criticism.  The Landlady was cheery and charming, and apologised for a domestic incident that had caused her to close the pub in the afternoon for the first time since 1999.

I also give her credit for her upselling efforts; “Would you like any crisps with that ?” a too rarely heard question in pubs these days.

An adequate (NBSS 2.5) Landlord, and some deep cuts from a lost Barry White album, and that was it.  I caught the 17.12 into Cowes.

17 thoughts on “THE GURNARD GRIND”