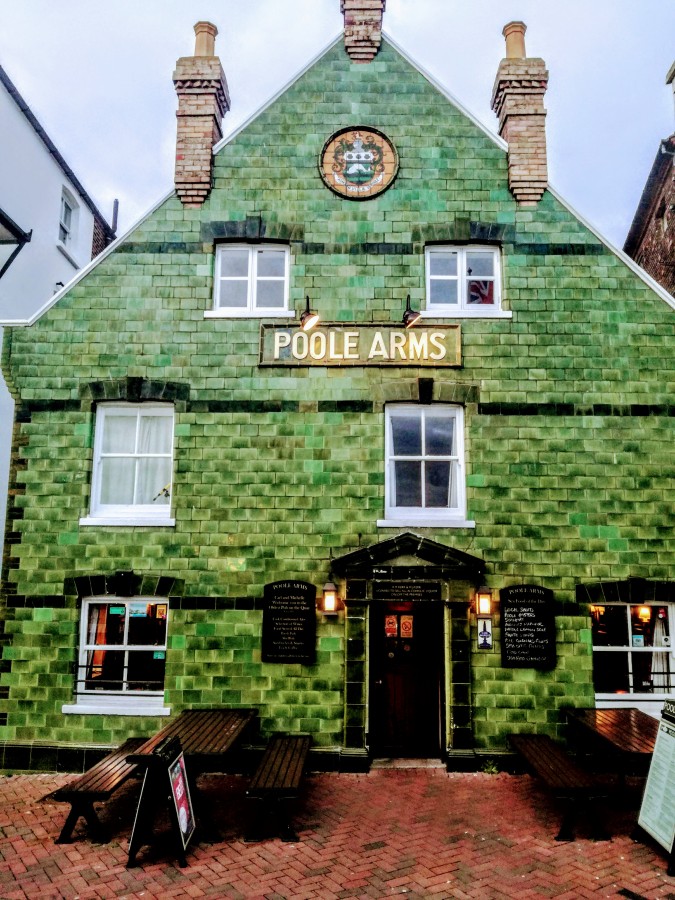 The train from Wareham into Poole, across Lytchett and Hole Bays is a delight, as I was to reflect a day later on the bus ride from hell on the Isle of Wight. Less blog material, though.

In contrast, the walk from Poole Station to the marvellous Quay is what kidz would call “a bit daggy“, though at least it’s pedestrianised.

North American readers may be confused to learn that Poole has lost its McDonalds, but gained a Taco Bell, one of a mere handful in the UK.

Suddenly remembering at 5pm I hadn’t eaten since Eastleigh, I decided to test how Taco Bell had changed since my last visit, in Anaheim in 1988.

I should have made for Bennetts pies. Looks a bit dead though.

The Swan remains very dead, awaiting conversion into something useful like a Brew Dog or Dunkin Donuts.

There’s a faded charm to the High Street, and the LP covers in the vinyl shop are a joy.

Can you name them all ?

It’s easy to forget the musical heritage of the area, just as I have already.

It’s very quiet around the Quay. Give it a few days and they’ll be hordes of families queuing for chips and admiring the view, just as Baden-Powell (I guess ?) is doing here.

Last August I stood on this spot and admired the fish restaurant aka Poole Arms, never dreaming it would be in the Guide a month later. For context, it’s keeping the Brewhouse & Kitchen and that new “craft bar” out of the GBG.

Two Old Boys at the bar, two couples on the sea food, one of them discussing their mother’s cooking in a way that ought to have attracted a clipped ear from his Dad.

The food trade didn’t dominate, and I really should have had the squid here rather than the Tacky Bell.

Decent cool beer from DBC (NBSS 3), and a civilised place for a pint. Almost Winchester in atmosphere (not the one in Shaun of the Dead).

Simon missed out on the outside Gents; his loss.

Oddly, no curtains were twitching as I headed back to the station. A real rarity.

25 thoughts on “ALL CHANGE IN POOLE”