An attempt to visit three plain pubs in an hour and then squeeze in the days glamour National League fixture (AFC Fylde v Dover) fell apart at stage one, when it transpired that Salwick Station doesn’t actually exist.

I bet Matthew Lawrenson could have told me that, and no doubt BRAPA wrote about it, but at least the walk from Kirkham & Wesham station was flat and dull. And dry.

You could visualise the Hand & Dagger from a mile away; unbranded canal side dining pub that’s not quite destination level.

Not exactly bustling, but it was 3pm and by law you’re required to be outside if the temperature exceeds 15 degrees in Lancashire.

Just two beers, and (coincidentally) loads of pints being poured, mostly White Witch.  When staff and regulars refer to a beer by a nickname (Witch, Doom, Speckly Hen) you know you’re in luck.

The outside drinking area is unusually quiet; I guess you’re hardly going to be passing through Salwick on the way to somewhere else.  That gave it a pleasantly relaxed feel.

Whether a creamy half of the Witch (NBSS 3.5, mind) justified the two hour slog will only be clear when we see if it kept its place in GBG19.  The GBG19 which has been delayed for an indeterminate time, I hear today.  Don’t get me started.

Back in Kirkham, or was it Wesham, they’re indistinguishable, and the smart looking Stables, home to yet more middle-aged year old blokes staring at phones.  They stared at me as I approached, scaring me out of an exterior shot, so you’ll have to look on the BRAPA site.

Inside, serious drinkers watching the results come in on eight TVs.  Perhaps they couldn’t get tickets for Fylde v Dover, though to be fair they all seemed to be Everton fans, hence the glumness.

Some BRAPA style punk to drown out the vidiprinter, some good beer again (Blonde Witch was very sherberty, NBSS 3.5), and a real sense of a male local.

Five minutes round the corner, and to be fair Wesham did look like Prenton to Kirkham‘s Oxton, if you know what I mean.

“Another blokes pub” I note, but in a neutral colour on my phone. More TVs, rugby this time, men of all ages drinking Bud from the bottle (how else ?), and a very real sense you’ve returned to 1994 just as Fylde wants to get to 2014.

Ignore the Mosaic and you’ve got a proper range of BBBs there.

Anyway, I found a nice proper table and enjoyed another nice malty drop of Butcombe (NBSS 3.5 again).  Alan Winfield would have loved these pubs, although I doubt there would have been enough for him.

Well done Fylde CAMRA.  Bet the micro craft bar comes along and spoils it all though. 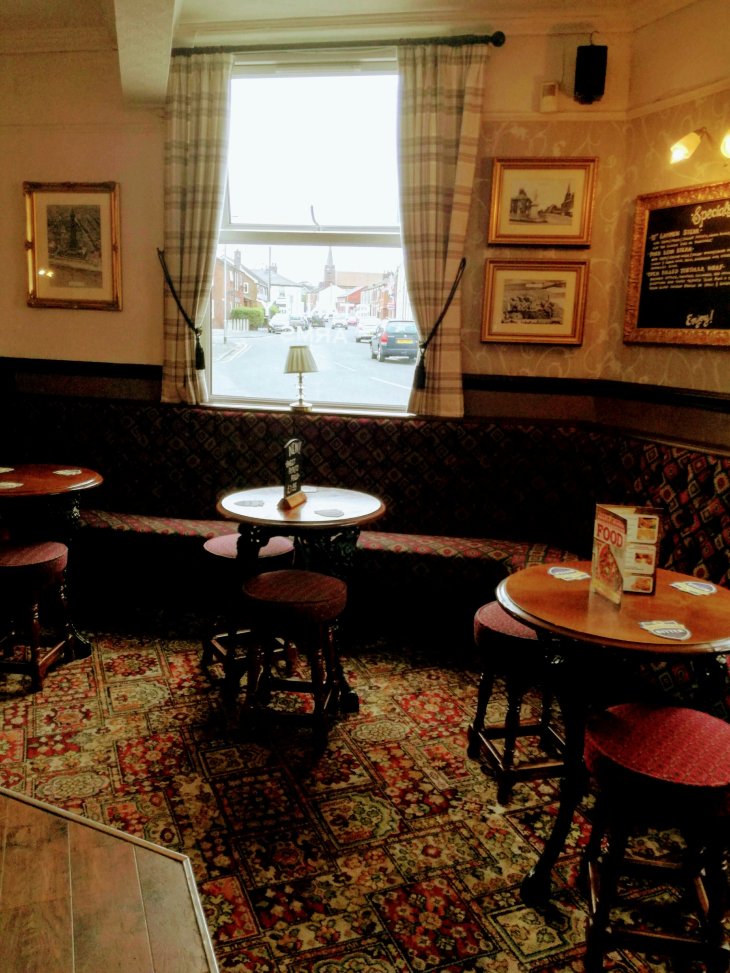 19 thoughts on “THE FYLDE, ANYTHING BUT PLAIN”