Someone who will be nameless just slagged off Bradford on here. And it wasn’t that Coldwell bloke either.

I never tire of Bradford and its never-ending quirkily-named suburbs, shown rather poorly on this bit of Navigator.

This is the sort of complex geography I spend too much time over. Despite getting its own entry in the Guide,  Wibsey is clearly in Bradford. If nothing else it’s walking distance from the Odsal Stadium, and the curry joys of Great Horton are next door. 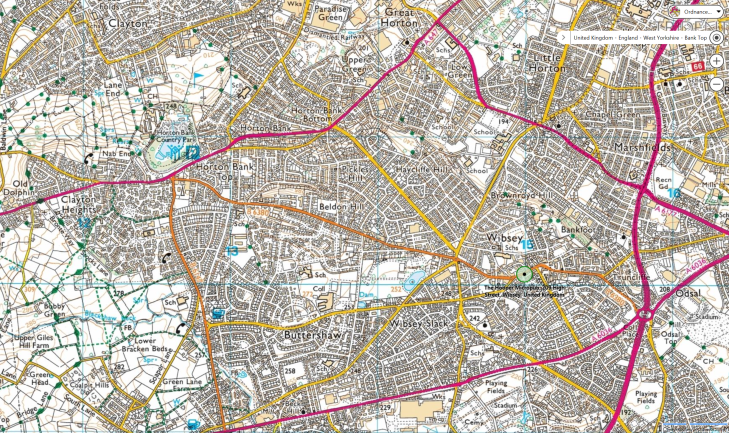 Wiki tells us that “Under the Danelaw Wibsey was in the wapentake of Morley.”, which is something you should try repeating ten times after a few pints in any of the boozers along the A647 like the Monkey or the Old Dolphin.

Wibs, as no-one calls it, has a well-pubbed High Street with proper shops.

Though it was the Rugby Club Pub, adjacent to the White Swan, that had all the business on the Saturday, most of it drinking bottles of blue liquid.

The modernish Hooper Micropub sticks out a bit on the High Street. Not literally of course; micros are designed without exending signs so that you walk past them three times.

If it reads as if I’m waffling, I am.  That’s because my photo storage reached capacity just as I walked through the door, so I spent 20 minutes over a gorgeous pint of Titanic Cherry Dark (NBSS 4) trying to free up space so I could bring you art shots like this;

I’d been planning a trip to a proper Bradford curry café, but I’m a sucker for pub snack bags with words like “Yummy Yum” on the front and bowls of gloppy dip inside.  Authentic.

As with Bingley, another cheery pubby micro, with odd banter at the bar about the origins of the Millwall song, and something about “chicken stripper” that makes no sense now, perhaps fortunately.  Music from the Doors, ELO and a frankly vile cover of an Oasis classic.

Plus steep stairs to the loos.

And that was West Yorkshire done.

Next stop, North Yorkshire, where dragons (and BRAPA) live.

12 thoughts on “PUB SNACKS IN WIBSEY”