Keep reading, the Bass badges are coming up soon.

The good thing about these Beer & Pub Forum crawls is that, unlike the Japanese tourists visiting the city, you can dip in and out of our tours without getting told off !

Mrs RM and I dodged the standard menu in the Chequers in favour of pot luck in Oxford’s Covered Market, a place so famous we’d never heard of it.

A high quality panini (Italian salami, brie) for £3 from Oxford Sandwich Co. set us up for the next tranche of proper pubs.

Oddly, opposite the vegetables there’s a display on some experiment they’ve recently started in Oxford to give women the vote.

10 minutes to the Castle; it would have been 5 but dodging folk with Primark bags is a skill I’m still perfecting. And don’t people in Oxford walk slowly ! 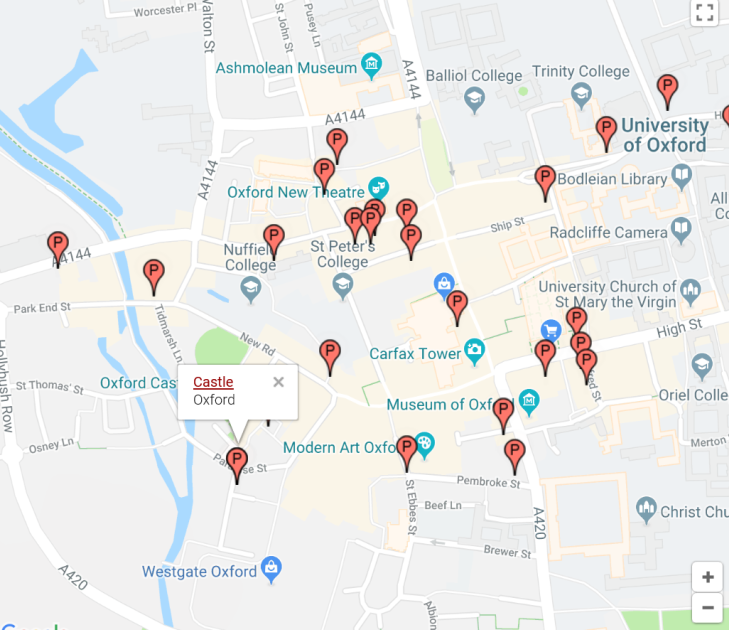 Most of the group had visited the Castle while the Official Taylors and Tim Splinter Group started the day on coffee in the next door Spoons.  Reports had been encouraging so we felt obliged to add a visit.

A rare city centre acquisition for a family brewer, it’s a curate’s egg of a place.

Neither ancient or super-modern, it’s just pleasant, which is fine. A good place to get the full range of Hook Norton beers, though adding guests, a full keg range (below) and Tiny Rebel in cans tends to dissipate the turnover of the cask.

One of the themes of this crawl was how many younger people (under 53) there were packing the pubs and by no means all students. I thought they were all skint ?

Saying that, the pints were served in proper chunky glassware with a decent head. I forgot to ask for my discount too, so £4.20 for the Hooky Gold.  Ouch.

You can see Mrs RM and Tim discussing malt ratios below. Mrs RM was unimpressed by the Gold; I thought it was cool and tasty (NBSS 3.5).  Marital disagreement is a feature of this blog.

I had more problem with the low ceilings, high stools, and general absence of lived-in character, but a visit by a coach-load of Leeds United fans would soon remedy that.

Anyway, a possible pre-emptive tick and again a good mix of folk enjoying the indistinct jazz funk. Rugby fans consigned to the cellar, and quite rightly.