Very occasionally I’ll go to a pub that I’ve been to before, or that isn’t in the Beer Guide. That counts as a major weakness when you’re doing the Guide pubs in your lifetime, like drinking at home or Beer Fests, but we’re all human.

I can’t resist Bass in a pub, however unlikely it is it’ll be any good.  I particularly enjoy it in East End pubs, though outside the Flowerpot in E17 I couldn’t name you a stockist.  So I wasn’t missing the chance to see if Bass’s reintroduction to the Henley Arms was due to a Landlord’s enthusiasm or it being the cheap beer on the pubco list.

North Woolwich in proper Docklands holds a weird appeal for me. There were easier ways to get to Charlton (report tomorrow), but DLR and the scary Thames underpass take in a diversity of London landscapes, and of course a free ferry trip with view along the Thames is not to be missed while it lasts. I do miss the Old Station Museum though.

I’d never been to a pub there before, but the Harvest Chinese takeaway is a favourite, though of course that has opening hours mirroring pubs now (4pm).

There’s been a bit of development in the area, and the little shopping complex revealed an excellent chocolate croissant in the Crusty Loaf. I enjoyed that while scaring locals by photographing the magnificent Truman‘s tiling at the long-departed Royal Oak. 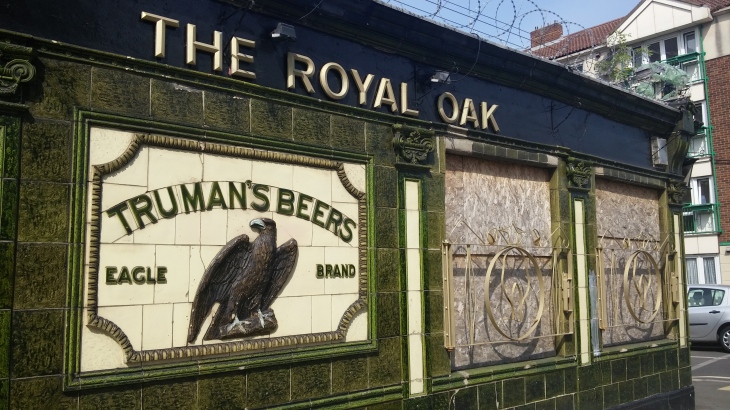 WhatPub paints a grim picture of North Woolwich pub closures. All that’s left is my Bass destination pub and a keg strip club (not a typo) that I chickened out of doing for the sake of completism.  I can’t take photos with my eyes closed anyway.

The even more challenging Henley’s Arms looks like the loser in a 1950’s ugly estate pub contest with Cambridge’s Ship and  almost anywhere in Cumbernauld. The WhatPub description “not yet affected by gentrification” is a masterpiece in understatement. A contrast with yesterday’s Globe in Rye came to mind.

It was friendly inside, a place I’d be happy to leave Mrs RM while I went shopping in Beckton, mainly because they had Parliament TV on.

The Bass was a bargain £2.60, but unfortunately competitive pricing wasn’t enough to persuade the locals away from the Carling, and it was a bit tired. If this had been Wetherspoons, I’d have taken it back. It wasn’t Wetherspoons though.

The pub though, was fantastic. Old boys talking about calamities in Benidorm, extraordinary coincidences at the 1980 FA Cup Semi-Final Replay, and a lot of that word that sounds like “fracking”. The 1980 Final programme is just visible behind the bar.