In contrast to St Helens, I can’t claim to have been looking forward to my necessary trip to Selby, despite my recent acclaim for small shipbuilding towns in the east. I doubt Selby sees Goole as competition for the tourist dollar though.

Pub Curmudgeon did recently highlight the appeal of the Abbey and at least one historic pub, which made the prospect of an expensive train journey more palatable.

It was worth the effort, and not just for the Abbey, which looked magnificent in those big, open skies I so love. A wedding party was just about to emerge as I arrived so I’ll have see the inside another time.

The town is spick and span, has the three main supermarkets (unusual for a town of 15,000) and seemed a cheery place. I assume they were just pleased at York’s relegation from the League, confirmed that afternoon. 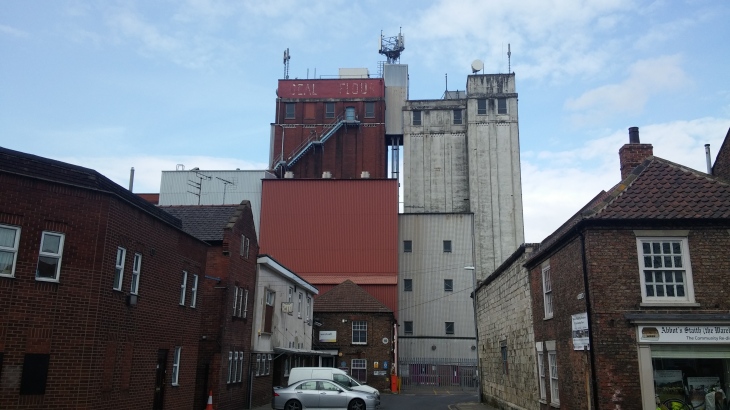 I’ve always liked the industrial heritage on the way into the town, though the flour mill above towers over the centre. There’s some decent walks around the Ouse and Selby Dam, and a pretty cluster of almshouses south of town.

Nearly all the other buildings of interest are pubs, most of which were doing a good trade on early evening Saturday, and hardly any of it food.

The Spoons is the only Beer Guide entry, though Selby has been missing from the GBG altogether in recent years. It’s newish and extremely pleasant, with a good mix of food and booze trade, and a Pale Rider as good (NBSS 3.5) as I’ve had outside of Kelham Island. I saw more real ale served her than for a good while in a Spoons.

Just along Gowthorpe is the New Inn, one of the old Tetley Heritage Inns and a classic town pub. The gem of a snug, with its ornate serving hatch, was the place for peace and quiet. The lively bar had customers spanning the ages, few of whom were enjoying the decent enough Leeds Pale (NBSS 2.5), but who cares what other people drink ?

I’d have been happier with a John’s or a Tetley if I’m honest though; it didn’t feel like a Leeds Pale sort of pub, terrific though it was.

Much more real ale being drunk in the Cricketers across the road, even at the scandalous new price of £1.90.

There’s obviously a lot of classic Sam Smiths town pubs in North Yorkshire, but this was a cracker.  Not so much for any particular architectural features, exterior apart, but more from the sense of being in a lively but well managed boozer. Almost Boar’s Head good, and the OBB was superb (NBSS 3.5).

So there you have it.  Gainsborough on the cheap perhaps, but a superb Spoons, a classic Sams and a Heritage Tetley pub within a minute of each other.  And a Chinese takeaway for every day of the month.

11 thoughts on “SAM SMITHS IN SELBY”