I’ve wrote about my exciting evenings out with auditors in the Black Country before.  Wolverhampton last month was an unexpected joy, and Walsall never disappoints (please don’t tell me Walsall isn’t Black Country, they sell faggots on the market).

The breakthrough of craft beer in these traditional homes of boring brown bitter and mild was very noticeable, with Slaters new bar in the heart of Wolves a standout.

We like to spread our patronage around, so it was West Bromwich’s turn last night. Normally this means The Vine, Britain’s greatest indoor Indian barbeque pub, but that’s best done before a City win at The Hawthorns.

From our reliable Premier Inn we enjoyed a canal walk that took us to The Bromwic. This is an enterprising new venture by America’s Smack Brewery  that impressed us greatly for its combination of craft nous and Black Country grit.

It’s based on the site of an old faggot factory near what was The Public, an enterprising art space that couldn’t survive recent council funding cuts. The entrance is certainly low key, and we spent ten minutes looking for an entrance sign. The signage is better from the canal entrance.

The interior décor is striking.  The re-use of some of the Public’s interior is pleasing, although whether you’ll prefer the halluciogenic effect of the toilets to the three-storey descent needed in Slater’s bar is a matter of debate.

My auditor friend rated the bar staff more highly than in Slaters, but he is from Norfolk.

Project Adrian allows the manager to mix US imports with local beers, and we both rated the Bathams highly (NBSS 3.5 though knocked that down to 1 when I noticed the keykeg dispense).  Most local craft fans were on the pints; schooners haven’t caught on in Brom.

I’ve never really gone for US beers, but as you know I’m a sucker for gimmicks and Smack beers look the business. 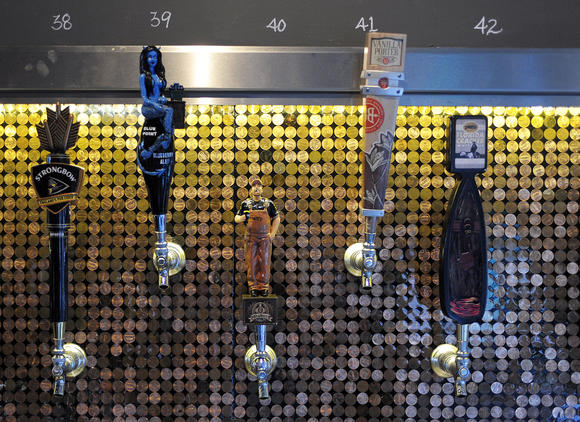 I resisted Number 38; not sure where Strongbow fits in the craft picture.  Smack the Mermaid, a framboise, was a bit overchilled but warmed up a bit when dispensed into the inevitable jamjar.  Charles went for the sake from a teapot with local rural scenes (top).

Food has seemed a bit secondary in craft bars so far, though I rate BrewDog burgers highly.  The Crack has a state of the art barbecue where you can bring your own meat to be cooked, paying a £5 per head cover charge which includes plates, baps and condiments. From experience, I know West Brom street market has some of the best meat anywhere.

This is a novel approach, with the risk of overindulgence.  For traditionalists, Naga chilli pork scratchings were available. The barman’s reminder to wash your hands before using the toilet came too late for one of us.

There’s a few gimmicks that don’t work.  The display of “soccer” memorabilia will appeal to visiting fans, and locals will appreciate this poster, even if I didn’t.

On Thursday night the Bromwic wasn’t packed, but this is traditionally karaoke night in Greta Bridge, expect it to be rammed tonight.

Smack are looking for further sites, with Lower Gornal and Brewood thought to have potential, although competition for the craft pound would be fiercer there.

Next time out we’re going to stay in Sedgeley, where the untouchable Beacon Hotel is apparently planning a Double IPA version of Sarah Hughes, unfortunately on keg.

*Bromwic (“Broom”) is the ancient name for the town

6 thoughts on “THE BROMWIC – TAKING CRAFT BEER TO THE BAGGIES”