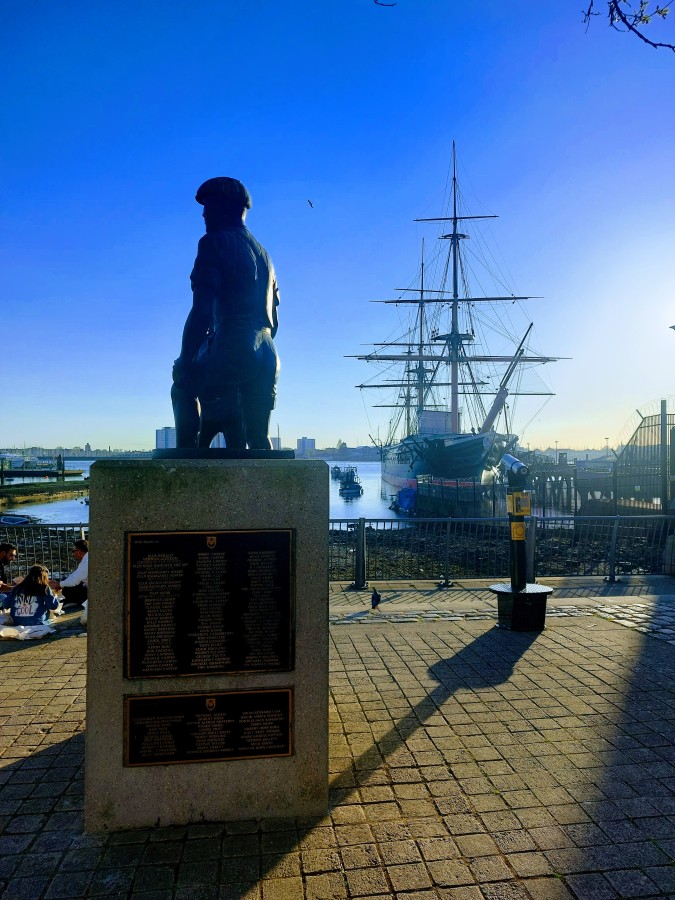 A couple of days in Hampshire, taking advantage of some sunshine by the coast. Accor Hotels are my new hotel friends; some of  their Ibis Budget range are going for £30 or less, and not just on Sundays.

Last week I attended the funeral of a friend from our church, who in his youth had played drums with Frank Kelly and the Hunters, whose few singles on Fontana are apparently so collectable that none exist.  They were big on the Portsmouth circuit, supporting the likes of Bobby Vee in the early ’60s.

So in honour of my friend Trevor (a wine man latterly), I went searching for live music and a few new pubs in Pompey. I failed on the former.

I’m a big fan of the city.  Apart from an underrated beach and the historical attractions, I rate it alongside Hastings, Bristol and the City of London as a place for aimless urban rambles.  I must have been a dozen times, but I still can’t quite work out the geography of Pompey, and particularly Southsea.  Mrs RM chose Southsea for our honeymoon (it was a £1,000 budget all in for the wedding), but I can only assume that gentrification has done for the cheapo B&B as I couldn’t find where we stayed.

The four new pubs in the Beer Guide are a good representation of what modern Pompey has to offer.  An attractive tangle of streets from my Ibis at Fratton Park lead down to The Golden Eagle, a warmly decorated and unpretentious Fullers house, with the bonus of a good Joules (NBSS 3), the furthest south I’ve seen it.  The half hour walk along Albert Road and along the Esplanade toward the Pembroke passes dozens of attractive buildings, including many ex-Gales back street pubs.

I don’t know why I’d never been to the Pembroke, opposite the Cathedral at the entrance to the Old Town.  It’s a classic boozer, full of cheeky “banter” between landlady and regulars, and proper bench seating.  I decline the Pride, which too often these days has a bit of butterscotch about it.  The Bass is beautifully presented (NBSS 2.5), but has a bit of butterscotch about it too.  Go for the Pride.

The Old Town is one of the UK’s most atmospheric, particularly at nightfall against the backdrop of the Spinnaker Tower and boats returning from the Isle of Wight.  The pubs, particularly the Bridge, are very picturesque in the style that Fullers do well.  I opted to visit the Spinnaker as night fell, and apart from world-class views across to lovely Gosport it was a bit disappointing. Better from the outside. As is the wonderful Guildhall, which leads to one of the newer Pompey pubs, the Brewhouse & Kitchen.

A tasty but slightly thin home-brew Porter (NBSS 3) in yet another friendly pub.  Typical modern uncomfortable seating though.  I finished at this year’s Wetherspoons in the Guide, the Lord Palmerston in Southsea’s shopping street.  It’s your usual high-standard Spoons, but the Oakleaf Hole-Hearted is well above average (NBSS 4), and the beer of the night.  The Chinese takeaway on Elm Grove was woeful.

Pompey’s most famous musical son (actually born in Burton) is “Joe” Jackson, whose opposition to the smoking ban has often referred back to the loss of character in his home-town pubs.  The pubs I visited on a Sunday night were doing OK, but were a lot less pleasantly boisterous than I remember.  The pubs on The Hard, which even Mrs RM wouldn’t have gone in once, are now Boutique Hotels and family dining pubs.

Another trip of fresh discovery, but I do feel the call of the Isle of Wight now, particularly at £12 evening return.

One thought on “POMPEY CHIMES”