Somehow I’ve managed to resist the charms of Bearwood over the years, while walking pretty much all of the neighbouring honeypots of Harborne and Oldbury, and knowing every inch of the A456.  Hagley Road is the home of one of my regular curry nights with former colleagues, and I can recommend Bengal Delight for a good value North Indian meal, even if I prefer the slightly shabbier cafes in Moseley and Ladypool.

I only really know about Bearwood exists because Kevin Rowland sang about it’s legendary café (RIP) 30 years ago, but it has just acquired must visit status due to a burst of real ale life.  So, on a rare day when it doesn’t rain in Brum, I walked Bearwood, and it was OK, it was OK. 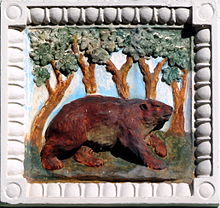 It’s a mixed area, in every sense, halfway between prosperous Harborne and industrial Smethwick central, and there’s some pleasing residential architecture outside of the traffic-clogged High Street (Bearwood Road).  Although lacking in canals, there’s plenty of unspoilt parklands, with Warley Wood standing out for it’s ancient woodland and walking trails.

It only took me a couple of hours to walk the bounds though, and it was clear the highlight was going to be the pubs on Bearwood Road. The Bear itself looks like a Spoons, and the expansive opening hours in the Beer Guide also give that impression, but it’s a John Barras (Spirit) pub that marks the convergence of Bearwood’s streets.

It certainly had the “all human life is here ” feel of a Spoons (see also this post, but with the added joy of satellite TV to watch England’s latest ODI collapse. The most local beer, Enville Ginger, was better than I could have hoped (NBSS 3.5), but I passed on the offer of what looked like 2,000 calories worth of mixed grill burger for £7.79. Another good spot for the Beer Guide by Dudley & South Staffs CAMRA.

A few yards south is The Midland, an immediate candidate for one of my Top 100 pubs.  Black Country Inns have done a wonderful restoration job on the former eponymous bank, as they have done in many other towns in the area.  A beer list the size of The Wellington in Brum central isn’t always a good thing, but all the retirees seemed to be drinking different real ales, and my Bluestone Porter scored NBSS 4.  The blackboard was dark beer heavy, and this before next week’s beer festival. Open all Christmas day too !

This is a pub that needs return visits; it may even be in the same league as Walsall’s Black Country Arms (see here) . And when I do return, I will again finish at the unexpected star of the day:-

Mad as a Hatter takes to it’s theme with gusto, and the Christmas crooning music won even me over.  It’s on a par with Margate’s own Mad Hatter, but with proper opening hours. No more Little Nibble, but this will do for me.

2 thoughts on “THE LITTLE NIBBLE”