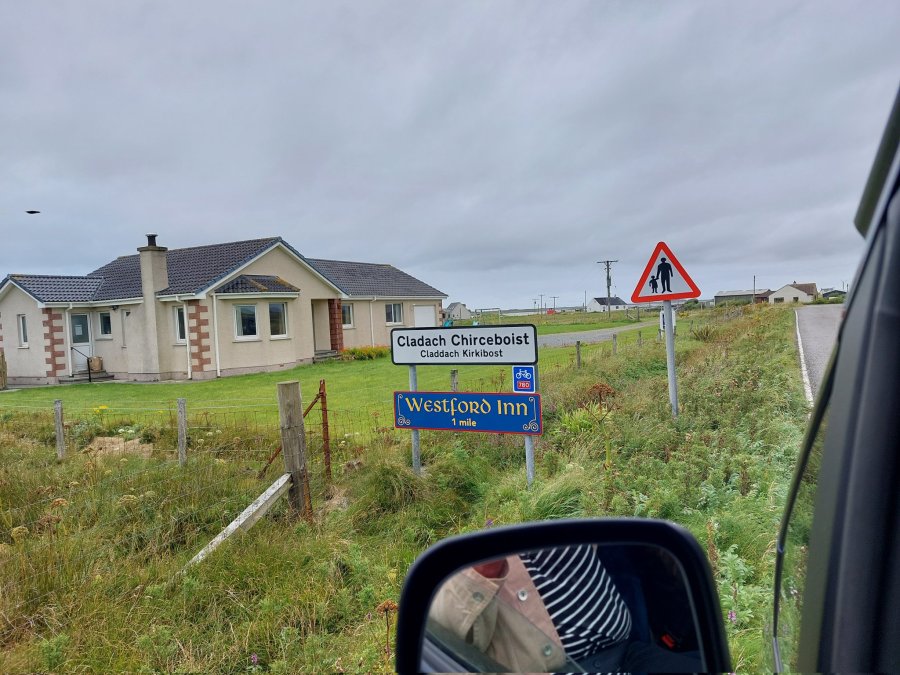 Another update from The Road to GBG Completion, this one from the Hebrides Hotel in Tarbert where we’re getting our money’s worth (£16 a fish finger sandwich) by hogging a table and the WiFi.

We awoke early on Saturday morning in Mallaig, hoping the ferry to the Uists had turned up.

It hadn’t; just a pleasure steamer, but an hour later we were boarding the CalMac to perhaps the most treasured pub tick of the year.

I’ve mentioned the Westford Inn at North Uist’s Claddach Kirkibost several times as I count down to the end of a 30 year quest.

The Westford is SO remote that legendary completist Duncan actually invented the submarine in order to visit it in 1576. And people think it was Da Vinci.

Actually, it’s not THAT remote, just one 3.5 hour ferry to South Uist and then an hour’s drive to the North. But look at the OS extract;

Every minute of that hour’s drive I was worrying it would be closed; for winter (it’s nearly the end of August, after all), for attending a CAMRA awards ceremony, for C***d.

And then, 10 minutes short of the target, we were brought to an abrupt halt;

Baa Baa growled at them, they took the hint and walked round us.

I asked Mrs RM to take a photo of the famous sign;

noting how it’s spelt completely differently to the map and the GBG.

At the Westford, the car park was deserted,

A fuller report to follow, probably in November, but for now I’ll just say the Westford is everything you could want from a pub. Wonderful welcome, great cask (mostly enjoyed by Mrs “most Scottish beer is rubbish” RM), real fire.

And no, I’m not doing them all on this trip.

14 thoughts on “18 (GBG PUBS LEFT) WITH A BULLET ! CLADDACH KIRKIBOST HAS FALLEN”