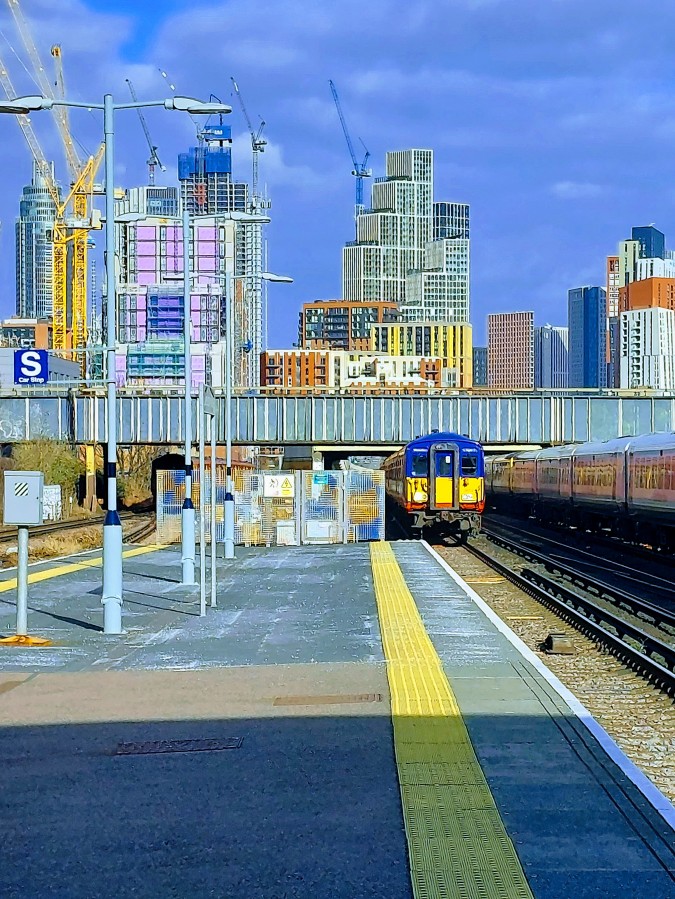 Tick 2 of 3 in South West London, and a first ever visit to Queenstown Road Station, which is an ideal spot to take a photo of That London.

The Telegraph is the only GBG pub in a vast area of posh South West London loosely described as “Greater Chelsea”. Or Greater Fulham if I’m avoiding an argument.

A disappointing turnout for Putney, though the Bricklayers Arms may return to the Guide soon enough. Some great Victoriana.

It starts to drizzle, and I pathetically decide to take the bus to Putney Heath, mainly so I can stand under the “WHAT A CHICKEN” sign. Americans should know that Londoners are as obsessed with fried chicken as they are with Spanish lager and hoary old indie rock.

Ten minutes later I’m on Putney Heath, which you’ll see was practically designed to one day accommodate a Brunning & Price like the Telegraph.

“Will And Pop”, “Effective Relationships”, “Dogstroll” and “Chelsea Personal Training”. It’s my idea of hell.

Folk criticise Spoons for their alleged sameness, but it’s B & P they should be gunning for.

One picture tells you all you need (NOTE : GENUINE PICTURE).

Yes, it’s a kennel, dogs running about at the bar “NO ! Hugo !“. Pay “Dogstroll” to look after your pooch like the rest of Putney does.

That said, the Brunning & Price staff are, as always, great.

“JUST a half of the Wimbledon, please“

“Are we sure” says barman with a wink. I nearly upgrade, but then tell him “Can’t be too careful at my age, no toilets on the underground“, which is more detail that is strictly needed.

B & P fulfil a role, just as Spoons do, making a certain demographic (which may never meet) feel comfortable about visiting public houses. At 3pm on a wet Wednesday in February, the Telegraph was bustling, and not with diners either.

Some folk believe they provide an outlet for small breweries, too, though I’ve never actually seen anyone buy a pint of cask in one.

The Wimbledon Copper was decent enough, veering wildly between 3+ and 3-. Rather pointlessly, as there is no 3- on the official NBSS scoring chart, though someone has put a motion forward for 0.25 increments. Oh dear.