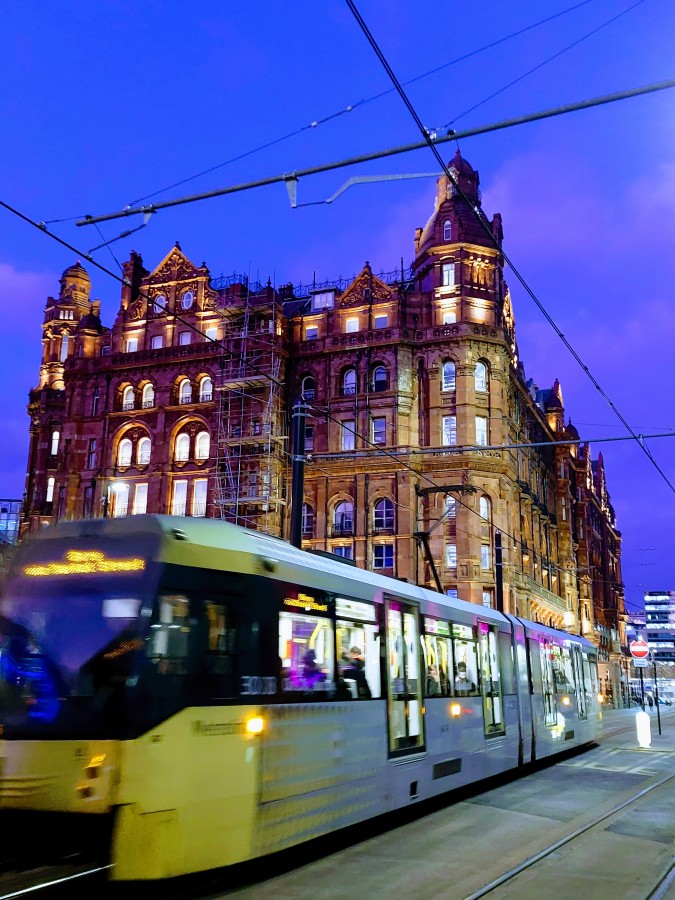 Blimey. A post on last night’s mini adventure. I’m not used to be up-to-date.

After a trip to the dentist in Sheffield (I’d swallowed a crown, very costly) I scooted over the Snake Pass to Manchester for a hair cut. I once met a Hi Fi dealer in Wilmslow who’d driven to Birmingham just to buy a T-shirt, but as you know I don’t buy clothes (at all).

I was Matt’s last customer at 17:30 and the 10 minute walk from the Deansgate Premier Inn (beloved of BRAPA) takes in the majestic new Manchester skyline.

I really must pop in the Briton’s Protection and stop walking past it.

Matt’s barbers is opposite the building site that is the Town Hall, next to the shiny new Lincoln Square.

2 years ago I’d never have believed my youngest son would be working in the heart of the greatest city on earth. He’s still never been in the Peveril of the Peak, mind. NB There’s a United boozer called the Rising Sun near the Lincoln that Matt has dared me to go in, so I shall, soon.

Not for tea, though. Instead we had a classic burger in Almost Famous on Deansgate.

Shame you can see the sweets under your plate but can’t eat them.

22 minutes on the train from Deansgate takes you to Bolton’s out of town stadium at Horwich Junction, where I saw Cambridge United for the first time since they lost with a whimper in Bristol in 2017.

Matt knows a Bolton fan at his shop (and at This & That, come to that), and the Cambridge Number 27 was in his class at school.

Sadly this was a limp United display bar a spirited 20 minutes at the start of the second half, though a 2-0 loss was better than Sunderland suffered at the weekend. Two divisions below City, but at times it felt like a different sport.

Good atmosphere generated by the Bolton fans, some pacy wingwork from the Wanderers, and the temptation of Worthington Creamflow at half-time.

I resisted. Matt had the Coors. And after all I’ve done for him…

11 thoughts on “WONDER IN MANCHESTER, WOE AT THE WANDERERS”