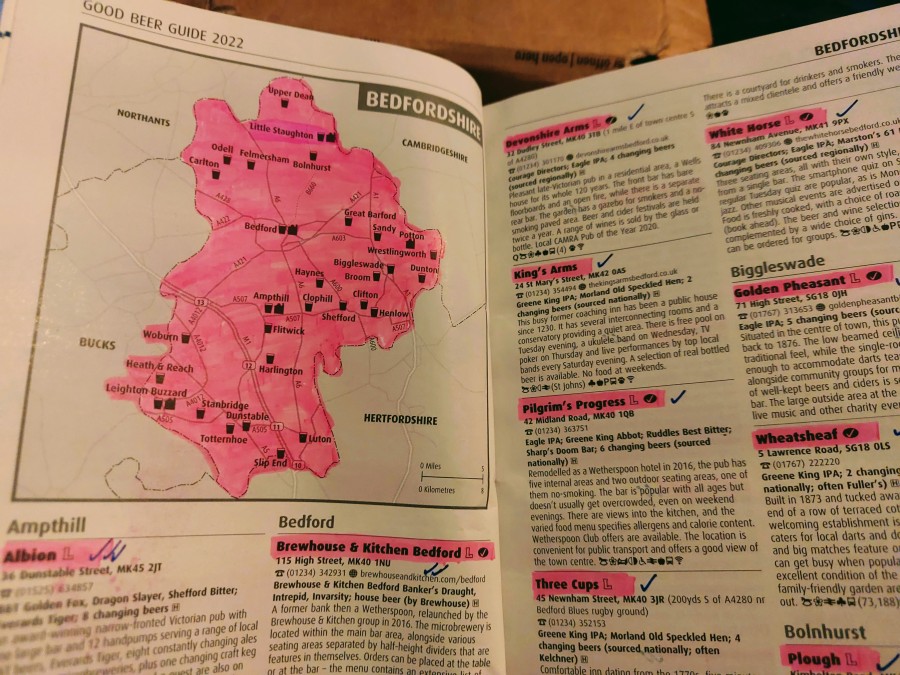 With all respect to Duncan and Malt and the other tickers, I suspect no-one has greater knowledge of Bedfordshire pubs than Simon or myself. BRAPA basically lived in the county after being determined to do the GBG alphabetically, and his great treatise on Wells Bombardier in Duloe was what got him a First in the Conservatoire of Life.

Whereas I lived just down the road, regularly visited non-GBG pubs around St Neots and thought myself an expert on Lower Kimbolton, but I’d never heard of the Crown in Little Staughton.

Regular readers will recognise Great Staughton as the place where I made an emergency loo stop for BRAPA before he ticked the White Hart on his never-to-be-forgotten (except by Simon) Hunts crawl.

Little Staughton ? Never heard of it. Bigger than I expected, church on a hill (well, hillock, it IS Beds), nice looking place.

The ancient Royal Oak down the road in Hail Weston had only re-opened after a long period of closure in 2017. In contrast the Crown is an ultra rare ’70s re-build which seems to have continued trading without any attention from the venerable North Beds CAMRA. Until now.

What has prompted its entry into GBG22 ? Apart from the homebrew at £2.50 a pint.

I’d been struggling to find out, with earlier than expected opening hours (no ! surely not) meaning I’d have turned up two minutes late for last orders on Friday, and then phoning up on the Sunday to discover they were “Closed today, me old China“. What country pub closes on a Sunday ?

As it turns out, one that virtually exists on wet trade, and they were open on that weird Bank Holiday Monday, at least till 4pm, so we headed there from Stevenage.

You can trust a pub with “Minder” on the TV.

“We were glad to se you open !” I said, as we were first in a closed looking Crown, prompting a bemused look from a landlord who clearly assumed his hours were entirely normal, and I guess they are to him, if not tickers.

That sign really does say “ARSE”, which is what the Gooners made of themselves on New Year’s Day. I chose not to discuss the football, and just enjoy a dark beer and the almost inevitable “Beer with no name”. Expertly paired with a tube of Pringles, a bargain at £3.29.

Not a classic pub, but with round the wall bench seating, simple grub and decent cheap beer I reckon BRAPA will love it. The villagers have even added an airfield for the plane he nicked from Andrewsfield to land in.

I hope you’ll agree, beautiful pinking. And more to come as January gets off to a cracking start while you lot “work” or watch Netflix and let pubs die*.

*BRAPA is excused. He can multi-task.

4 thoughts on “OPENING HOURS TENSION IN LITTLE STAUGHTON. WHEREVER THAT IS.”