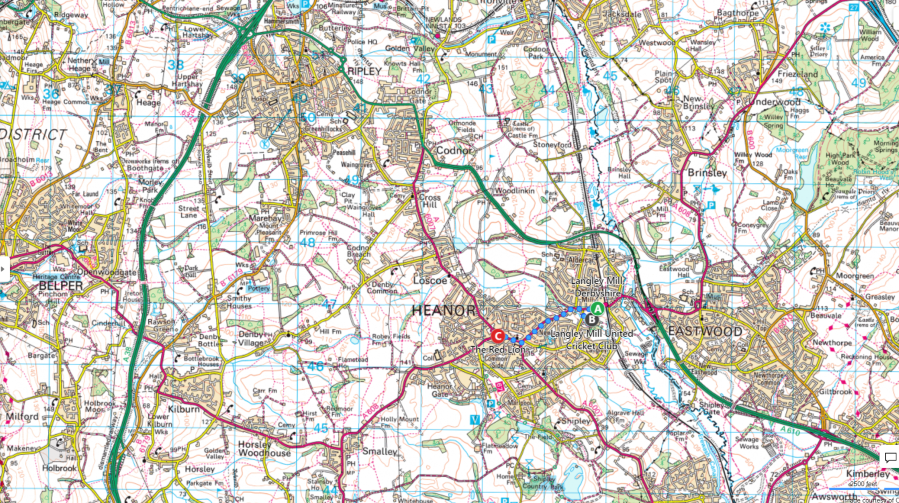 Back at Alfreton the platform was filling up with the Bank Holiday crowd.

The alternative title for this blog post was “Huddled up in Heanor with those gin can blues again” as the Alfreton Knitting Circle commenced its annual trip to the Nottingham Lace Market.

It felt a bit weird standing on a train, after several weeks of “all seated, window seats only“, but it’s also good to see normality return and there is little more normal than drunk East Midlanders discussing their frustrated holiday plans.

Seven minutes later I was the only soul to leave the train at Langley Mill. What did they know that I didn’t ? Perhaps the stairs, a film location for Joker 2, had put them off exploring the new capital of micros.

Now, you’ll have heard me talk a lot about the Amber Valley on this blog. There’s at least a dozen great pubs in the extract below, including a Top 5 entry.

But the eastern side of the valley is less well known than Belper’s suburbs, and it was nigh on 15 years since a new and short-lived Spoons had given me a reason to go to Heanor (though I used to work with a native of the area who had long given me cause to curse it’s existence).

The 1.4 miles from the station to the market square is notable for a) its steepness and b) the lack of items of note, which I guess is also notable.

I snatched 20 seconds of top class cricket action, but didn’t stay around for the DRS review.

Heanor itself has produced few notable names bar bowler Billy Bestwick (alliteration was compulsory in Victorian Britain), whose First Class cricket career included some of the worst batting figures since I myself was out for 4 successive duck at Cottenham Village College.

In my experience you can gain the measure of a town in about 27.5 seconds by noting the presence or absence of a Heron Foods, a Boyes department store and a Spoons.

The presence of a Boyes ensures that you’ll find gentlefolk in town on a Saturday, just as a pub called “The King of Prussia” (Amber Taverns) will guarantee that some of the younger population will resist the temptation to jump on the train out of hicksville for the big city.

Sadly, a pub with a Union Jack in the window can still be guaranteed to ensure the turned round handpumps that have become de rigueur in 2021.

7 thoughts on “FROM LANGLEY MILL TO HEANOR…”