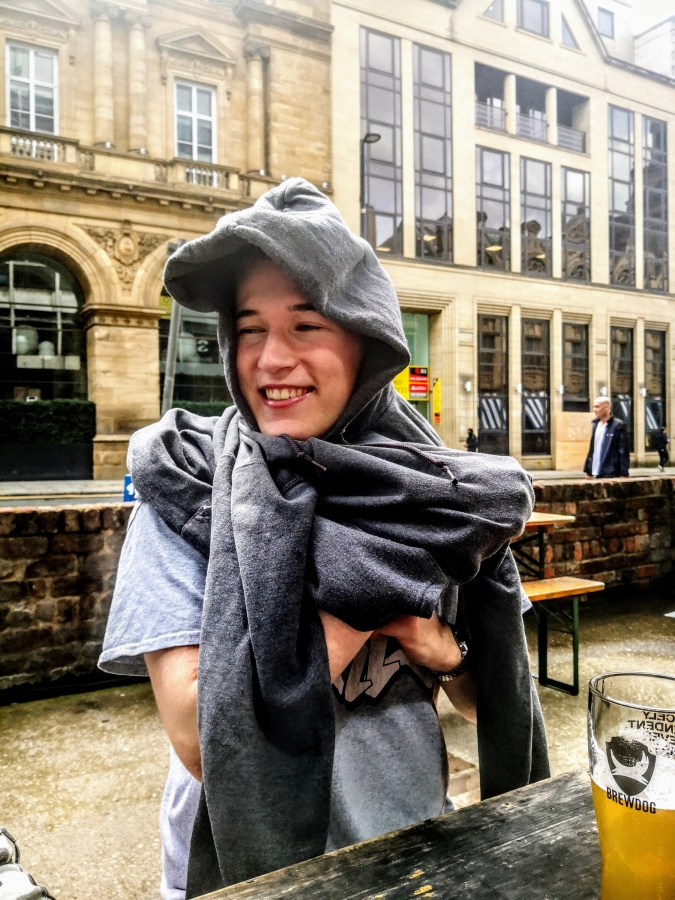 Matt has completed his first year in Manchester. I was going to say he’d acquired a barbering qualification, a penchant for the Paramount (JDW) and a girlfriend, but Emma would rightly have called out my casual sexism.

Emma joined us at BrewDog (I), a place I’ve never warmed to in the way I have the Cambridge or Glasgow branches.

I would have tried to get them in a Proper Pub on Portland Street, but the youth of today, they got lots to say, mostly “Shut it Dad“.

But for Dave, here’s the other main Holt pub in central Manchester, part of one of two main pub trilogies in town. I can see why you’d ignore the Old Monkey in favour of the Circus or Grey Horse, to be fair.

It’s hard to ignore the delights of central Manchester, and with near empty streets it’s now legal to stand in the centre of the road and admire the architecture. Try it.

There was plenty of half-price diners in Albert’s Schloss and Rudy’s pizzeria, but BrewDog had loads of free tables.

Unfortunately, I had to admit our group comprised two households, so fell foul of the Lancastrian Lockdown and had to sit outside.

Luckily, the sun shines on the righteous and it NEVER rains when I’m in Manchester, and we survived.

Our IT literate group (HA !) had more problems with the App, and BrewDog’s version only gave you individual Rishi discount,so all four of us had to order and pay ourselves.

We’d lost our hunger by the time our Patriot burgers turned up. But then we found it again.

I had the Lost Lager AF, after realising it was half price. Matt could tell it apart from the normal Lost Lager, though that was a few degrees colder.

In other news, Matt has finally learned to take his own jumper off. Emma has a real catch there*.

*What a joy to have a blog where you can ridicule your teenage children without any comeback.