Froooom. Throwm. ANiceTotnes. However you pronounce it, Frome is a gem, and I was delighted to get a return trip out of the new GBG.

Spring had arrived just before I did. 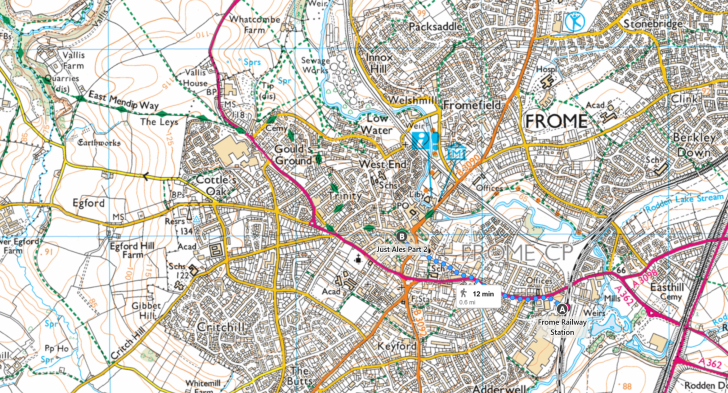 Frome was voted the sixth coolest town in Britain by The Times, just behind Coalville and Carluke, and continues to delight pashmina Paulines, gentlefolk and IT professionals with its quirky streets and cultural offer.

Even the unisex loos are arty. I was tempted to linger to set off the alarm and see whether they would play Mumford & Sons at me to coax me out.

At the bridge I met this cheerful accordionist and bought him a Greggs ham salad baguette and cappuccino as reward for not playing “Sultans of Swing“.

The precinct shops are very small town (think Haverfordwest or Newmarket), but life gets exciting once you head up St Catherine St past the rogue “Coventry”, a small chain of Somerset bars aiming to bring the best of Coventry culture (keg Brew XI) to the South-West. Or perhaps it’s a building society.

I arrived at Just Ales 2 just as it opened at noon.

No, of course it didn’t.

As I peered through the pane a couple of canines outside fought for the honour of being the first to inflict their germs on me. Their two owners stopped to compare breeding notes.

I headed for the Cheap Street leat.

This stream was actually used to deliver Draught Bass to alehouses in town before the introduction of craft in kegs.

I thought I’d hang around and wait for Just Ales to open, eating up time in Coffee #1 (the best chain), charity shops and the marvellous streets.

It really is a joy of a town. What stands out is the number of young professionals (professional what I don’t know) providing business for smart coffee shops and craft bars, including Palmer Street Tap that served me this Drop Project sour.

It’s the one on the right.

Just Ales had opened just after 1, and I immediately fell in love with it, greeted by the South African guvnor and his “enthusiastic” dog (top).

“Oooh, is that a trendy tea coloured DIPA in your achingly trendy mug ?”

I was delighted to see Just one beer on, however apologetic our Landlord was.

A chatty place, we talked Biltong and business and discussed at length the arrangements for negotiating the terrifyingly dark stairs to the loos.

A gem of a micro, particularly if you like close canine attention, and don’t we all ?

14 thoughts on “FROME IF YOU WANT TO, FROME AROUND THE WORLD”