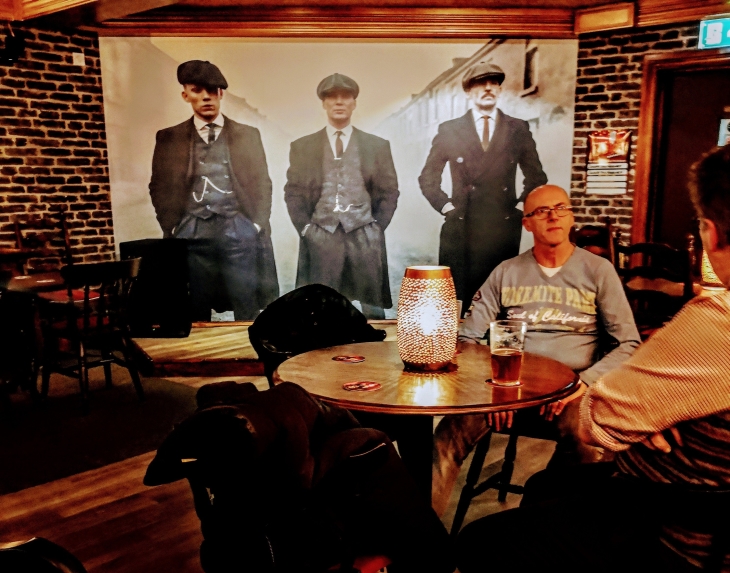 Tick No. 2 on the return to Wolves, a rare newbie in Brierley Hill, home of you-know-what.

This post will mainly be of interest to Curry Charles, who’s had an office base at the Waterfront since before Simple Minds wrote a song about it.

GOOD TO KNOW (as the Yanks say) : Don’t drive here. You have no chance of parking next to The Garrison and a taxi will not take you to the door. Walk from Merry Hill, there’s a Primark there.

I’ve had a pint in the Spoons along the picturesque Dudley Canal, and a salami panini from the deli next door, but the Garrison is a new attempt to cash in on all those NHS staff who drink pints at lunchtime (i.e. none).

Guess what the theme is. Go on !

Yes, it’s a Dexy’s Midnight Runners theme, based on their shortlived Peaky Blinders look just after “Don’t Stand Me Down“.

Brummie gangs, Celline Dion, and an overfriendly dog called Alfie. You couldn’t make it up. But it sorta works, and there was decent mid-afternoon trade from people who clearly weren’t skiving audit jobs.

Quite an ambitious beer range and a fairly obvious choice, you’d imagine.

But I always feel obliged to go local, and the Enville glass is so lovely.

Quite a local feel, with a few folk clearly starting their Friday nights early, and a beer that started average before emerging triumphantly as a 3.

That’s the benefit of drinking to the Titanic theme tune, I guess.

4 thoughts on “PLAYING A PEAKY BLINDER AT MERRY HILL”