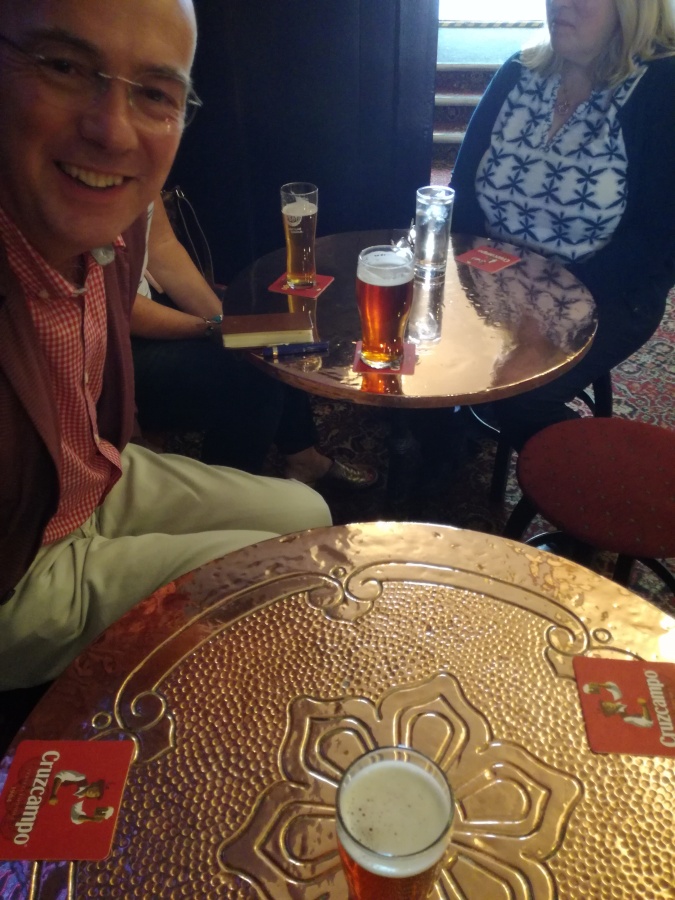 Our first official Northampton pub (Paul Mudge always has a head start in Spoons) was the only GBG entry that opened before midday, and you know how much we like our morning openers.

Pleasingly, Paul managed to identify the former Fish, where Mrs RM and I spent a night in 1998 before buying a Ford Ka from Car Supermarket. See if you can see the clue.

There’s some handsome buildings in central Northampton, and some solid looking pubs.

Perhaps nothing stunning, but I reckon BRAPA will warm to pubs like these when he gets on to the letter “N”. In about 2043 (if it’s not all micros and the Rifle Drum then).

The Wig & Pen would have been my automatic recommendation for the town; bustling, live music, good (mainly) national beer brands, CAMRA discount (joke). And some traditional seating with plenty of space for a large group of us.

The rest of the group “ummed” and “aahed” over exotica like Hook Norton; I just went for the IPA.

We spent a good 45 minutes reintroducing ourselves, which isn’t strictly necessary when we’re all called Peter, Paul and Mary, but that’s the British for you.

The music lurched from “Come on Eileen” by Dexy’s to whatever Beyoncé was singing about (something about hair), with a Bauhaus tribute no doubt planned for later.

I guarantee Simon will enjoy his 27.5 minutes here, whether or not it coincides with football or dreadful rugby fans tipping up.

But the star turn came from Jon, on day release from Devizes, who taunted us with a pair of Bass braces bought dead cheap from a local charity shop that morning.

I eyed them lustily, but Jon wasn’t selling. Cyndi Lauper began to sing the strangely appropriate “She Bop”, and it was time to move on. Perhaps we’d stumble across a Pedigree pashmina en route to the Olde England.