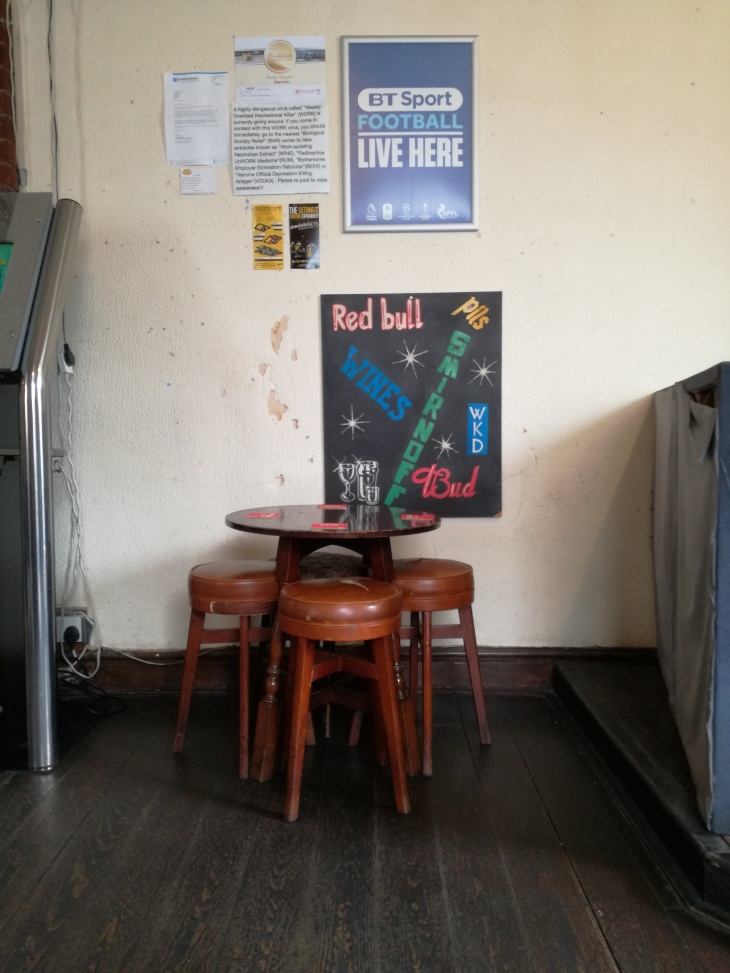 If pushed, I prefer the basic town boozer to any other pub type.  Sam Smiths places like the Boar’s Head, or the Ship in Connah’s Quay, where folk just go to chat with mates. Preferably in places with just the one cask beer you can rely on being on in good condition from 11am in the morning.

That’s a small club, both of advocates and pubs like that in the Beer Guide. I see the cover to the new GBG will feature photos of a) Trendy bar, b) Hazy thirds, c) Country pub.  They should have had the Ship on the cover.

More than one licensee has implied to me that Beer Guide inclusion depended on having more, and more “interesting” beers on. Quality first, always.

So well done to Bristol & District CAMRA for picking the King’s Arms in Kingswood, to the east of Bristol. 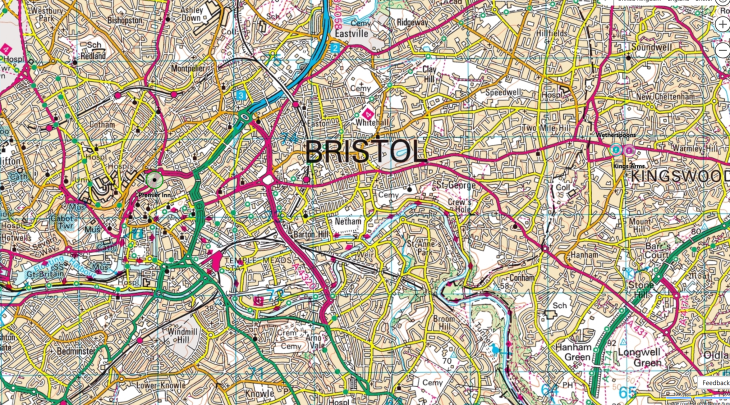 Last year I’d walked east along the A420 into Lawrence Hill and Redfield, providing a favourite blog title and an even more exciting cultural experience.  The step across Bristol City boundaries into Kingswood feels like the step over the A406 from East Ham into Barking.

The cultural offer drops off dramatically in Kingswood, brutalism replaces street art, and we get things called “Microdermabrasion” being done to its residents. Scary.

At the top of the High Street, the Kings Arms fills me with joy on first sight.  I doubt Mrs RM would have shared my enthusiasm for the exterior or the tiling. 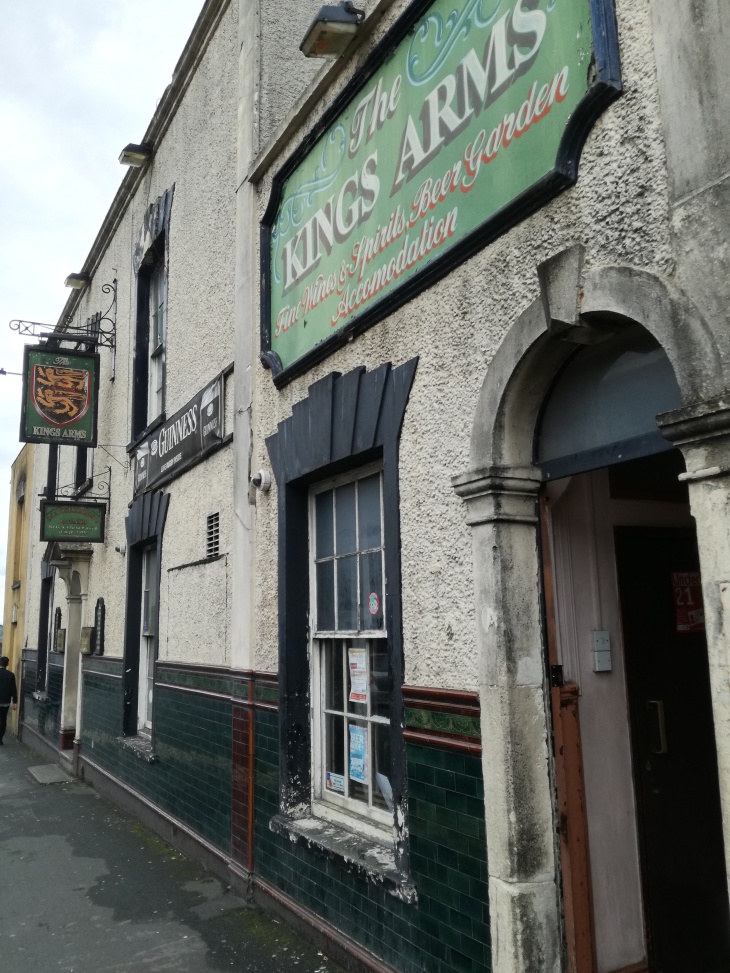 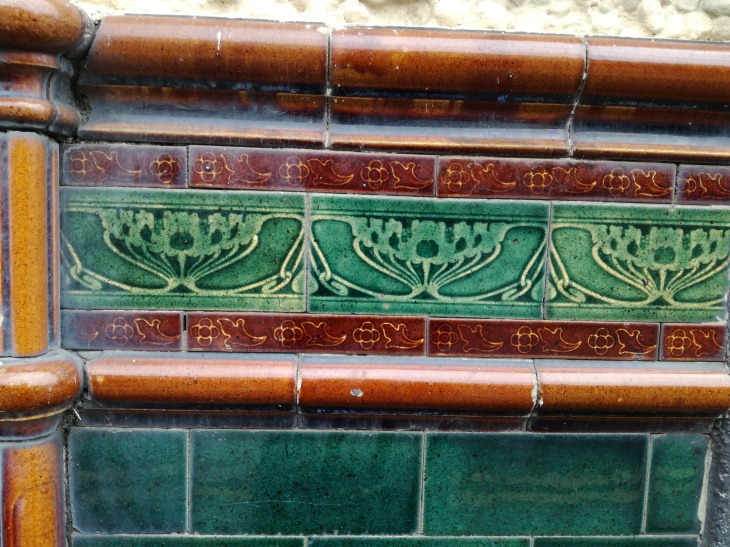 I ask the treasure of a landlady for a half of the lone cask ale (£1.50) and she pulled out a pint glass.

“Don’t worry.  It’s a lined glass”  she assures me.  A landlady who understands that beer tastes better in a pint glass deserves a CAMRA award.

It was as cheery an afternoon in a drinkers pub as you could wish for.

As always, everyone else was drinking Fosters and Natch, which I now find out is a cheap cider rather than a craft DIPA.

Proper pubs don’t have superfluous features, and the King’s Arms just has all you need for drinking and banter, bar a few choice paper cuttings (see “WORK” below).

The trip to the Gents was, alone, worth the price of admission.

A wonderful experience, capped by the “Thanks Darling” on the way out.

The Spoons next door isn’t in the Guide, but on the basis it might well be in in a month, or a year, or whenever, I thought I’d save myself another trip out on the No.43. 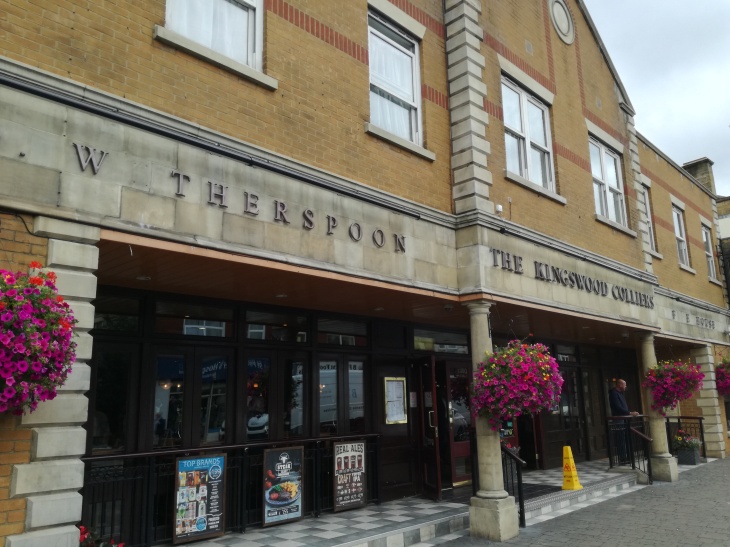 With letters falling off the sign and a rumbustious atmosphere, this was as basic a Spoons as I’ve been in. Full of OAPs making up for lost time (I don’t mean Quinoa salads). 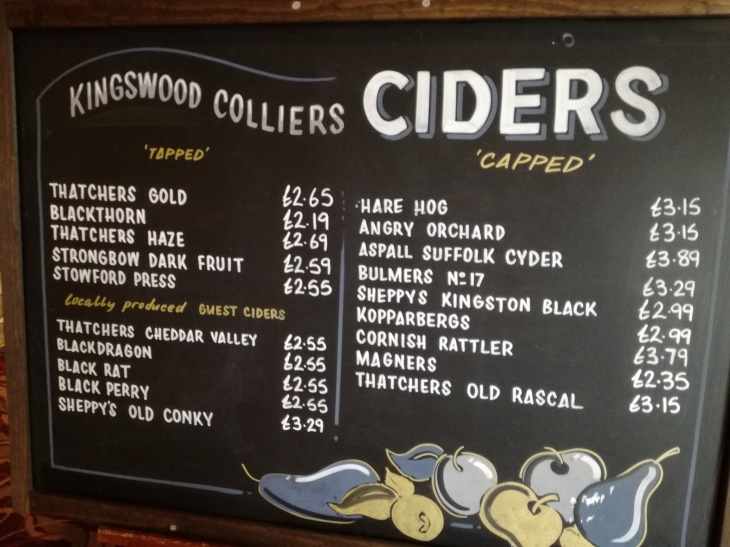 Frankly, choice looks nice, but they could just serve Thatchers Gold here and no-one would mind.

For 2017, the ale range wasn’t bad at all, and that Butcombe (horrible new pump clip apart) was better than good (NBSS 3.5).  If CAMRA allowed such things, I’d add 0.5 for the “Thanks me darling” I got here too. 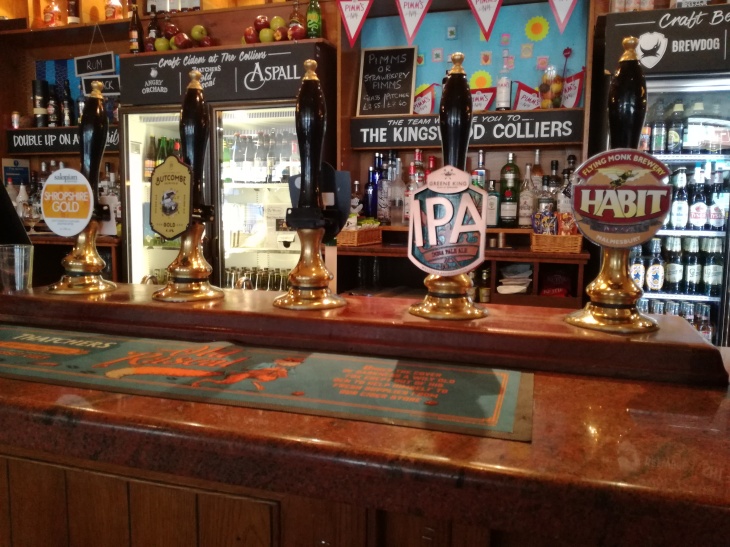 No street art, but some of the best beer and banter in Bristol.  I’m betting against a micro opening here in the next 5 years. Prove me wrong, Kingswood.

22 thoughts on “TOP BOOZERS IN KINGSWOOD”