Writing about my ordeal of having to drink beer straight from the glass at Reeperbahn Beach, I remembered a time when Hosten Pils was pretty much the bottled beer choice, certainly in the dominant Greene King estate around Cambridge.

On reflection it seemed the beer of choice for ladies in our group, before Brew Dog invented craft and #beerforher invented pink bottles.

That was 25 years ago, and I confess I wasn’t convinced that Holsten** was a thing any more, at least when they dropped the sponsorship of Spurs. But now I find their deeply gorgeous brewery five minutes walk from our Altona hotel. 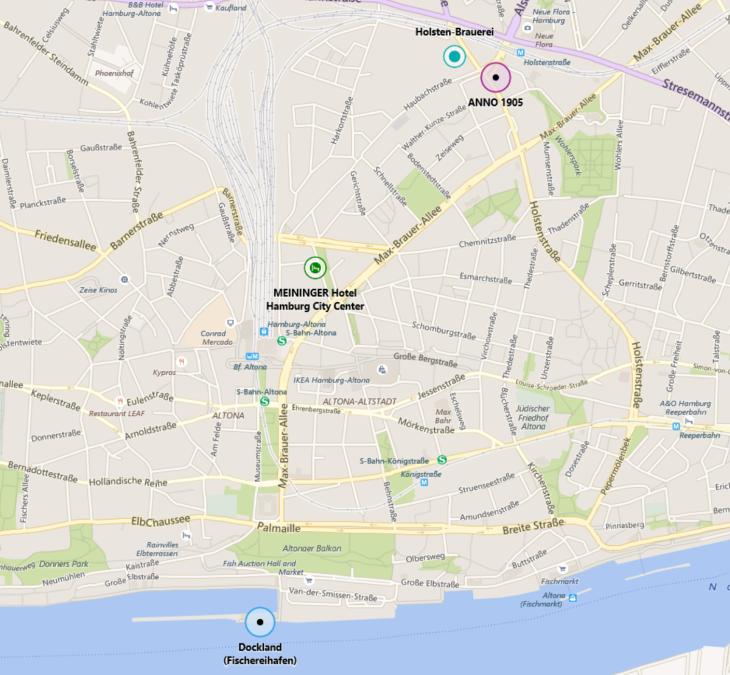 The walk through Altona’s leafy suburbs shows you where the money is,

though even here there’s no escape from the tasteful graffiti.

If any German speakers can interpret the video explaining “HSV Nix Gut” I’d be grateful. Something to do with turnips in craft beer, I think.

Anno 1905 is my closest European Beer Guide place to our hotel, and clearly hasn’t changed since the 1906 Guide came out.

I’ve mentioned the lack (due to bombs or planning) of traditional pubs in Hamburg, but this is a gorgeous example of the genre, a Black Friar or Pineapple of a pub. And, I guess, at least formerly a showpiece for the Holsten range.

I recommend a trip for the beer taps and barman’s aprons alone. 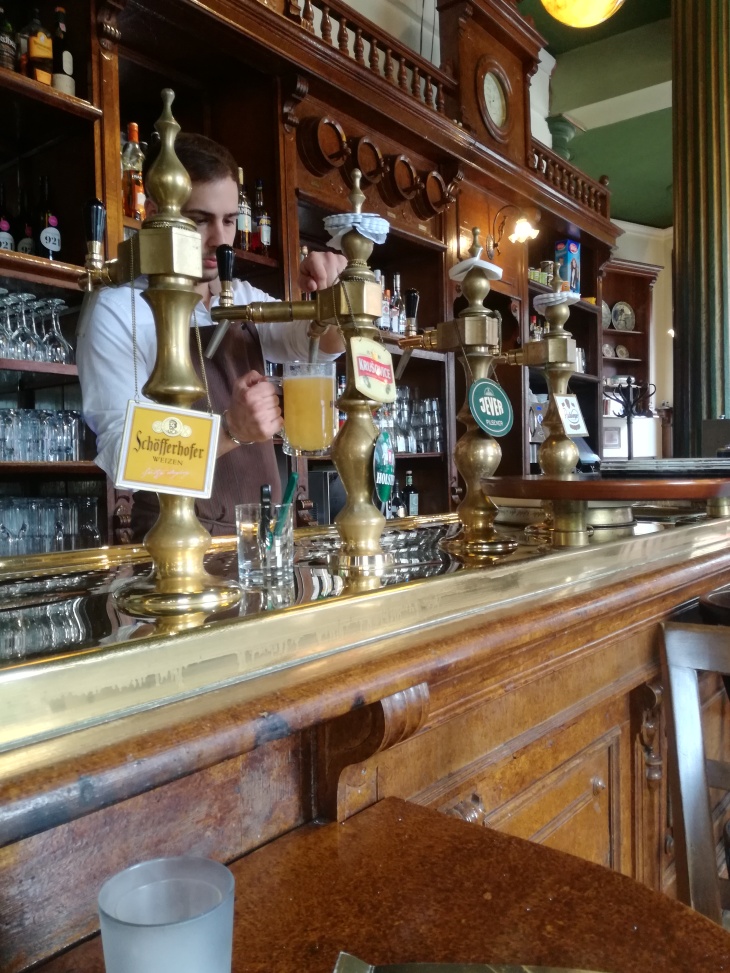 After my first beer swigged from a bottle in 30 years the day before, this was my first ever Holsten Pils. What’s on your bucket list, then ?

I’ll confess that yellow fizzy Pils tasted quite wonderful to me, sitting among the dark wood staring at ancient beer taps and enjoying the chilled jazz of Kenny G*.  I’m easily pleased.  All it lacked was the company of Mrs RM (he adds quickly).

You sometimes read about the drama of the pour, and that was all here.  Particularly on the head of the Jever that followed up. The Jever is clearly the more interesting beer, but I can’t say I preferred it. 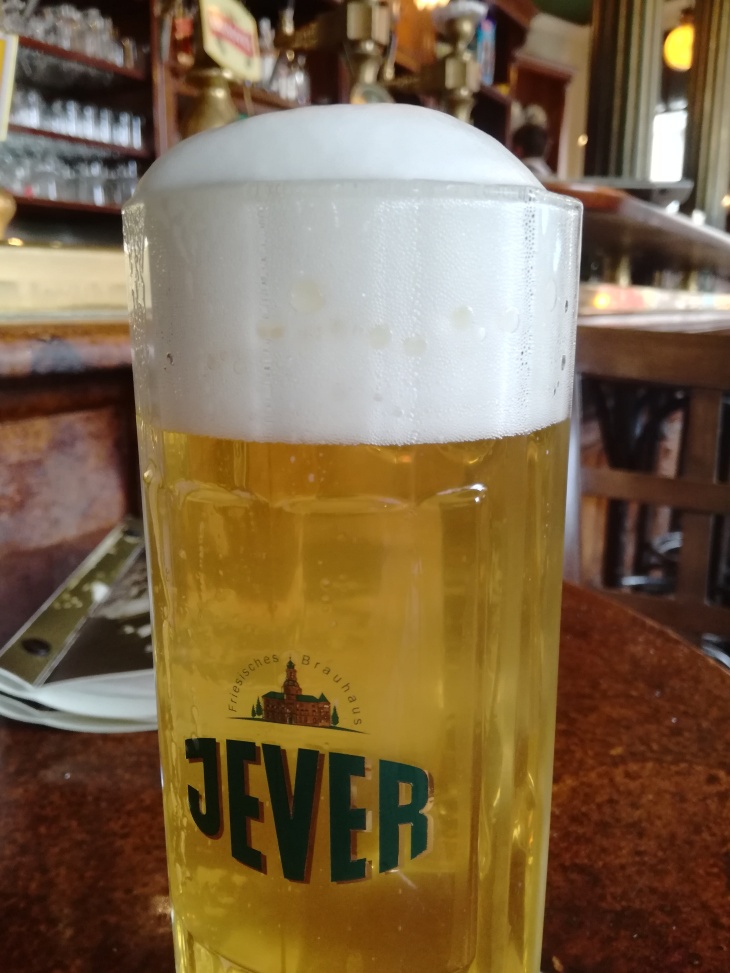 I nearly stayed for an inadvisable third, but would then have forgot to pay before leaving, or stopped for a kebab on the way back to Mrs RM.

Noticeably, everyone else had come to eat, even at the distinctly un-European time of 5pm.  That’s when my Mum and Dad have their tea these days, but is hardly even breakfast in Spain.

If Simon had been here he’d have been able to give you a little appreciation of a group of friends studiously avoiding eye contact with the scary, unshaven Brit at the bar. 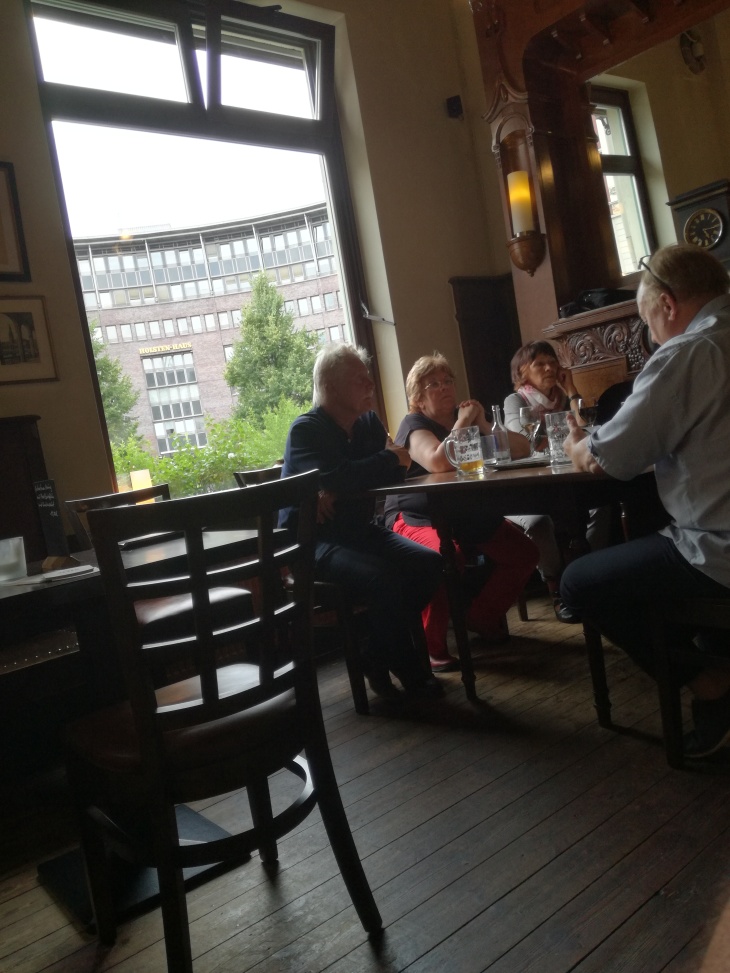 You can see the Holsten offices in the background, sliding into the earth.

A typical German pattern emerges.  On the one hand, all the pubs seem food dominated. Even the unashamedly craft bars I’ll be coming to tomorrow.  On the other, even the women seemed to be drinking beer by the half litre (Mrs RM would have asked for craft).

Drinking two half litres of 5% in half an hour in the heat takes it’s toll on you at my age; I fair wobbled back.

6 thoughts on “HOORAH FOR HOLSTEN PILS”