Driffield is one of the more handsome of those towns, but that doesn’t explain just how busy it gets mid-week.  Busy enough to support a dozen pubs, so let’s not complain.

But it doesn’t even have its own branch of Harpers and the attendant Chippie Tickers that brings, though the smell of chips hung in the air on the walk down Middle Street (which is pretty much all of Driffield).

There’s an attractive view at the head of the navigation,

and some gorgeous Georgian architecture,  but I assume it’s the lure of the Silent Barber that draws in the old blokes who’ll pay double not to have to discuss their holiday plans with a complete stranger.

A decade ago the town had a hotel with Draught Bass in the Beer Guide and Room at the Inn.  I guess there’s enough commercial activity to support a Best Western, topped up with those folk who don’t like sea views.

Sadly common sense no longer prevails and the Bell has moved onto more fashionable ales.  As ever, Alan Winfield provides the top review here.

The real draw round here was the Eagle, a bar-less classic that deserved its place on Mr Coe’s “Basic, Unspoilt Pubs” list. No AVC to save that one.

Of course, some folk regard micropubs as the natural successors to those classic living-room style pubs, with their forced conversation and strict rules about what you’re allowed to drink.

Thankfully the Butcher’s Dog is very much the small pub with big appeal i.e. more the Middlesbrough than the Herne model.

Beer on pump too, so a decent head on that Three Brothers Ex Wife (NBSS 3.5). But despite a large ale and cider range,the chat seemed to be about Babycham and gin, neither of which seemed to be on the menu.  It was good to see what looked a large family group of all ages enjoying a liquid lunch, and in such lovely bench seating as well. There’s already a lived-in feel here. 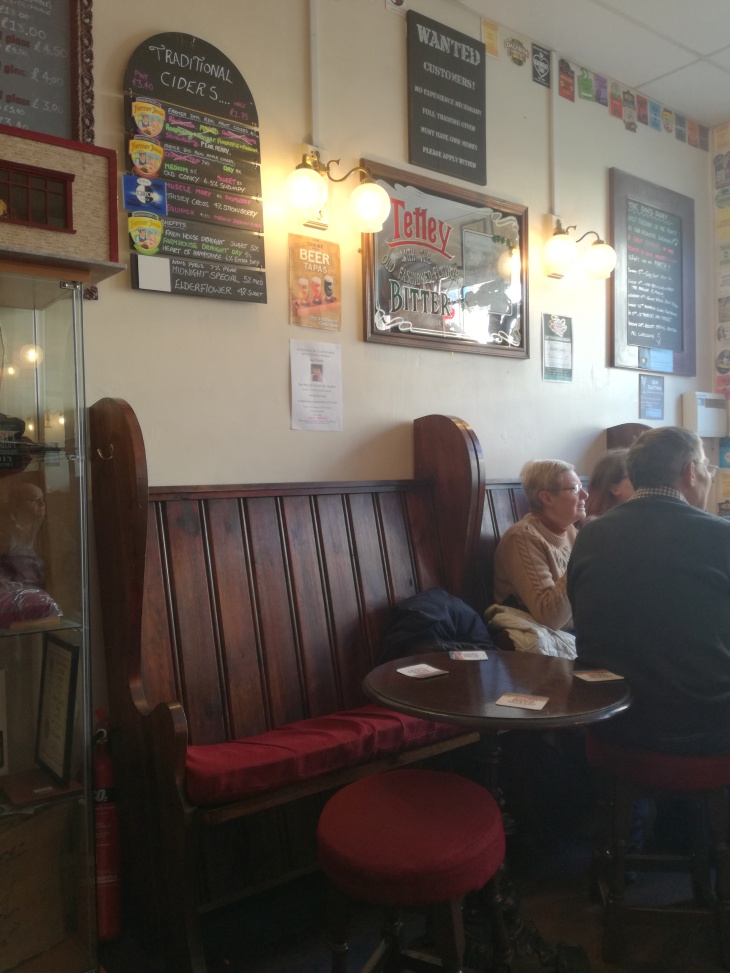 I could warm to micropubs if they were all really pubs like this one.

There’s plenty of robust looking boozers in town for fans of John Smith Cask and Marstons, both of which are fine with me. The other GBG entry is a corker;

6 thoughts on “DRIFFIELD – LOSE AN EAGLE, GAIN A BUTCHER’S DOG”