South-east London into Kent is now a journey via a sea of micropubs; three new ones in five miles along the A2 have entered the GBG this year, to join some impressive company.

As always, the real joy of micros is in the exercise of self-control as you realise the published opening times are totally irrelevant.

So bless you, Penny Farthing in  Crayford, for sticking to your published hours (all day Friday !), as well as being a little bundle of cheerfulness.  On a par with the ones in Worthing and Wellingborough for their welcome.  As you can see, a lot of pale beer being drunk, and all in pints. 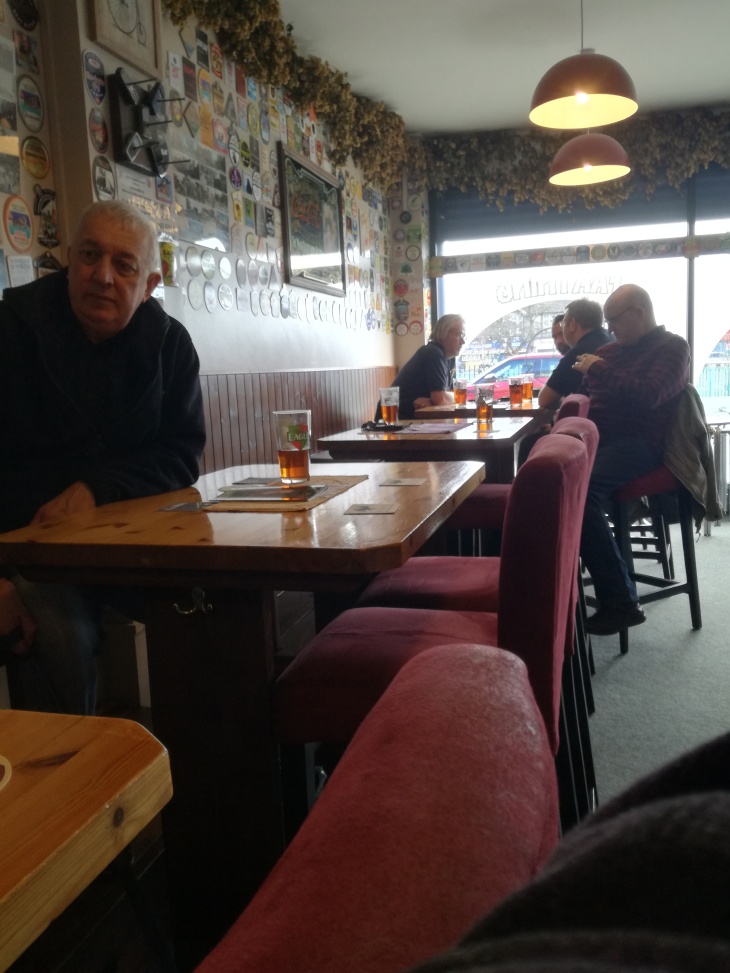 The dark beer from Milestone was a winner too (NBSS 3.5), enjoyed while the owners and nearest locals talked me through the pros and cons of the competition.

Actually they didn’t, they were genuinely excited to be part of a micro movement that matches Thanet for breadth and quality.  If anything, there might now be a bit of nervousness as competition for a place in the next Good Beer Guide heats up.  The Penny Farthing should have nothing to worry about.

The layout forces conversation, an array of four seater tables round the walls were all occupied so you have to share.  That suits me, but it’s not a place to come to hideaway.

The Penny Farthing may be Crayford’s star, but there’s some classic Courage and Shep Neame roadhouses around the corner.

Crayford itself isn’t as exciting as Dartford, but the regeneration of the area around the Town Hall is impressive.  This is the pick of the sculptures;

I can’t claim the walk to Blackfen is a classic, but with a slight diversion you can take in some decent suburbia, including the Red House.

I tipped up at the Broken Drum right on 3pm opening, and found myself the only customer, happy to read CAMRA magazines over a second superb beer of the day from 360 Degrees. Just as good as the Penny, just a bit quieter.

For a complete contrast, head to the George Staples a few doors down. Astonishingly, I spent my 47th birthday here, a real treat of an evening ending in the Sidcup Travelodge.Even Simon can’t match that.

This is your classic South-east London fun pub, rewarded of late for beer range by GBG appearances you might be surprised by.

Five points for naming the film showing on the screen below.

The other 20 screens, including those in the smoking shelter, had the Maltese Invitational Snooker on, a big draw round here.

The weekend clearly starts early in Bexley borough; the place was packed by 3.30; all human life was there.

There was less life in my half of Titanic though, with the pumps hidden firmly behind the couple at the bar.

I love the fact that in the Beer Guide micropubs rub shoulders with places like this, where the conversational gem isn’t about beer, but chips.

“Don’t come between a man and his chips, Tracy”.

15 thoughts on “THE CRAYFORD TWINS”